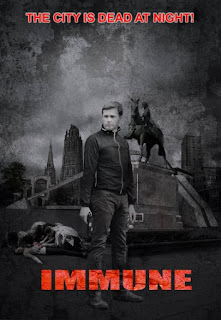 Immune starts with a prologue establishing that the zombie apocalypse was caused by an inadequately tested pesticide which somehow escaped into the foodchain and caused everyone in the world to suddenly fall down dead and/or turn into a zombie. Within this short sequence you’ll spot a middle-aged bloke in a blue suit – and that’s me! And the young lad running away from his imminently deceased father is young TF Simpson. Conflict of interest established. Stick another credit on our StarNow pages!

The story proper concerns Jack (Christopher Clarke, who starred in Halogen Entertainment’s previous films Icicle, Echoes and Change for a Shilling), who is for some reason immune to the plague, although he wouldn’t be immune to having his guts ripped out by zombies so he has to be wary. This is not as difficult as one might presume because these particular zombies are photosensitive and burn up when exposed to sunlight, so they only come out at night.

Jack has established himself in a random house on a modern housing estate in Coventry. He cycles around, raiding tinned food from other houses, and believes himself to be the sole survivor. As long as he gets back home before dark, he should be safe. In lieu of gas or electric light, his night-time is illuminated with dozens of candles and tea-lights, which he must have liberated in significant quantities from the local branch of Homebase.

See, if it was me I’d hole up somewhere more nocturnally secure than a standard, middle-class home. Those French windows don’t look particularly zombie-proof to me. Also, I’d stock up on wind-up torches and solar-powered lights rather than relying on candles. Just saying. 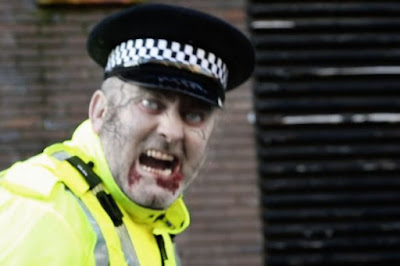 At the end of act one, Jack finds a body lying on the road, barely alive and with a bite mark on his arm. He takes the injured man home and nurses him back to health. This is Tommy (Simon Jarrett) who was previously an inhabitant of ‘the village’, a solidly defended, self-sufficient commune. Tommy was thrown out for wanting to leave in order to find out if his wife and son are still alive.

Act two develops the relationship between the two men, then in act three they set out to find Tommy’s family and/or the village (the location of which is something Tommy’s not sure about). There’s not a great deal of plot to Immune, and what there is leaves a considerable number of unanswered questions. For example, we see Tommy dumped, unconscious, from a car. So the inhabitants of the village still have petrol – and enough that they can use some for driving off somewhere just to chuck out someone who wants to leave. Why didn’t they just throw Tommy out of their compound and let him head off on his own to take his own chances? 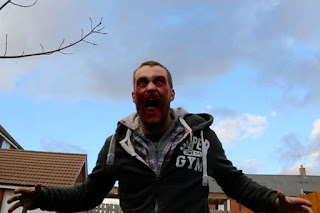 There are several action sequences in Immune – zombie attacks that will tick undead fans’ boxes – although they’re not the focus of the movie. Nor does it significantly explore the desperation of survival among a suddenly non-functioning world. It’s more existentialist, a meditation on loneliness and isolation. It’s bleak and miserablist and frankly depressing, and dammit I like that in a zombie film.

I also really like its Midlands pride. The location is unequivocally Coventry, with plenty of local landmarks – in the prologue and as background to Jack’s lonely cycle expeditions – to keep local audiences happy. There are dialogue mentions of Birmingham, Kenilworth and – yes, indeed – Leicester.

While I’m not sure it adds anything significantly new to the diverse and extensive genre of British zombie films, Immune scores points by working nicely within its microbudget limitations. Good use of locations, limited but effective CGI, and a willingness to spend long periods of time with little or no dialogue are all to its credit. 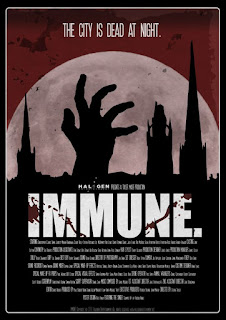 A one-off screening in April 2016 at an arts venue in Coventry was extended to three screenings because of the interest. This was followed in May by a VOD release on Vimeo on Demand. Halogen Entertainment, who previously concentrated in dramas, are now filming the pilot for a proposed six-part Anglo-Norwegian fantasy/action/adventure TV series called Dark Frost (formerly Bea Bumble).