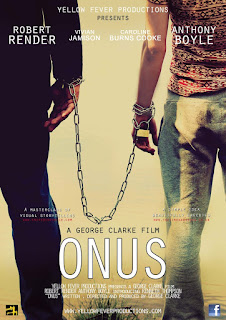 Just over a year ago I watched George Clarke’s 2009 debut feature Battle of the Bone and his newly released The Blood Harvest. Since then I have watched (for my next book), but not reviewed here, all of Clarke’s other feature – and now comes Onus, actually shot before The Blood Harvest but released eleven months later. So here’s a quick run-down of the career of Northern Ireland’s busiest independent film-maker.

Battle of the Bone is impressive: a distinctively regional zombie romp in which three young people try to make it across Belfast, avoiding undead hordes and religio-political gangs, all culminating in one of the most breathtakingly imaginative visual sequences I’ve ever seen in a zombie picture. Sadly Clarke’s follow-up, The Knackery, is rubbish: a plotless nonsense about a game show where participants fight each other while running away from zombies. Not worth your time.

The Last Light: An Irish Ghost Story, in 2012, was better though still not big on plot. A workman gets trapped inside an old, haunted building that he’s boarding up while his wife and sister-in-law come looking for him. It’s atmospheric but deathly slow. This was followed by 2014’s Splash Area: Night of the Freaks in which three teens out on Halloween chase some never-explained psycho clowns into a mental asylum and spend the rest of the film running away from them. All three of these movies had scenes which could have been shown in any order; truth be told, even Battle of the Bone is light on actual plot but makes up for it with likeable characters and that amazing ending. 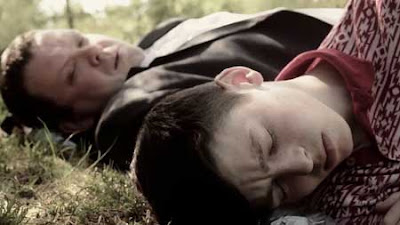 The Blood Harvest and Onus represent a new phase of George Clarke’s career as he finally stops making films about someone being randomly chased by something. Harvest has a real plot; in fact it has two. Acts one and two are an intriguing police procedural as coppers hunt down a bizarre serial killer – then act three gives us a silly and not entirely satisfying sci-fi explanation for everything.

Onus has the same model but even more explicitly so as there is a ‘Chapter 1’ caption at the start and a ‘Chapter 2’ caption 40 minutes in, at the point when you have completely forgotten the first caption (plus, inexplicably, a lonely ‘Thursday’ caption partway through the second half). It seems like Clarke, who undoubtedly knows his way round a director’s chair, just can’t work out how to tell a story that runs for about 70-90 minutes. He either pads out the running time with endless variations on the same chase concept that carry no coherent through-narrative, or he writes two sub-feature scripts and bolts them together. He needs better scripts (or at least a decent co-writer) if he is going to fulfil his potential as one of the UK’s most interesting indie horror directors.

So to Onus. The first half, shot in Norway for no obvious reason, starts with an intriguing premise. Teenager Kieran (Anthony Boyle, currently playing Draco Malfoy’s son in Harry Potter and the Cursed Child and soon to be seen on screen as a young Ian Paisley) and middle-aged Bob Andrews (Robert Render, a Clarke regular with numerous bit-part credits including FreakDog) awake in the middle of nowhere with about two metres of chain linking their wrists. In his free hand, each has an automatic pistol held firmly in place with swathes of gaffer tape. A post-it note on a nearby tree says they have one bullet each and only one of them can survive. They already know each other slightly: Andrews is a science teacher and school counsellor; Kieran was a bullied pupil who visited him on numerous occasions. 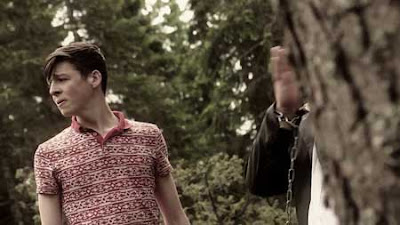 This is a startling, intriguing, original set-up and if the whole film was about these two it could have been awesome. What’s going on? Where are they? How did they get there? Who has done this and why? Is someone watching them? (I’ll tell you now: no, despite some misleading POV cheat-shots.) What I was looking forward to was an exploration of the characters, their relationship and their unlikely, uncomfortable situation, with some plot twists or revelations at key points that made me completely revise what had gone before. To be fair, we do get two major, revelatory developments at about 20 minutes and about 40 minutes, shortly after which we suddenly switch to Chapter 2 “one month later”.

This far less interesting 50 minutes centres on Kieran’s mother Joan (Clarke regular Vivian Jamison) and her counsellor Liz (Caroline Burns Cooke: The Spiritualist). Joan is determined to find out what happened to her son but the answer is closer to home than she expects. The psychological horror of the first half is ditched in favour of a less-than-thrilling thriller driven by coincidence and leaps of logic. For example, an absolutely crucial moment is when Joan sees someone with a length of chain – but there’s a thousand reasons why someone would have a chain. It’s just regular chain like you can buy from Homebase. 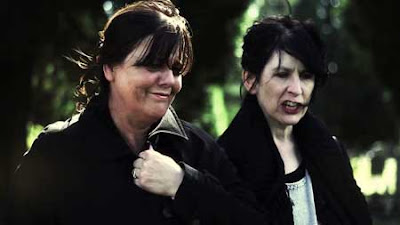 One of the characters says, on more than one occasion, “It was meant to be simple” but the plan that is revealed, which evidently went wrong but may now be repeated, was pointlessly complex and liable to go wrong in any of several different ways.

There is nothing to suggest that the first story takes place anywhere except the locality in which these characters live so why it was filmed in Norway is beyond me. At one point the two encounter a Norwegian-speaking man (Kenny Thompson) in a Scandinavian-looking forest cabin outside which graze a herd of goats. It couldn’t be more Norwegian if there was Grieg on the soundtrack and a sign saying “This way to the fjord.” Yet what we subsequently learn makes it impossible to believe that this could have happened in another country.

Onus is a frustrating film (as was The Blood Harvest). I really, really like what George Clarke does on a broad scale, building up a Northern Irish indie genre film culture (including his annual Yellow Fever International Film Festival) and supporting homegrown talent on both sides of the camera. He has achieved some impressive things, including DVD releases on both sides of the Atlantic and even limited domestic theatrical runs. But the simple fact is that his scripts let him down so that, aside from his brazenly ambitious debut, his movies to date have fallen flat. 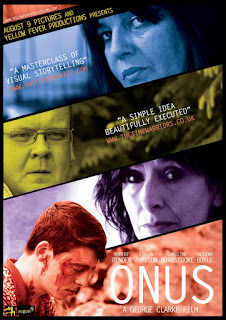 The Norwegian half of Onus was shot in June 2012, with Render and Boyle earning ‘additional material’ credits for improvising much of their dialogue. The domestic home-stretch was shot one year later and the film premiered at Clarke’s YFIFF event in September 2013 with further festival play in Belfast and Florida. The DVD/VOD release via Left Films was on Boxing Day 2016, by which times Clarke had not only shot and released The Blood Harvest, he was already making a start on his seventh feature Mindy Must Die. I retain a hope, as I have with each of his previous films, that this will be his breakthrough title, the movie where he finally demonstrates his undoubted talent without a weak script hobbling him.

The DVD includes a commentary, Making Of, bloopers and trailers.