It Came for Friendship, But Found Food 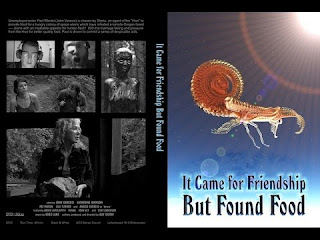 I recently invested in an Amazon Firestick – and it has opened up a whole new world of watching for me. As I sit in my man-cave, while Mrs S watches Great British Menu in the living room and TF Simpson watches Cinema Sins on YouTube in his bedroom, I was previously reliant on watching things on my laptop, except for DVDs which got viewed through the TV.

Well, now I have the Firestick, which means when I want to watch shows on catch-up, like Pointless, University Challenge and… well, that’s about it, to be honest; I don’t watch much telly… I can view them on my TV. But there’s so much more. I’m not bothered about Amazon Prime or Netflix or any of that bollocks. I’m not bloody paying to watch television, bugger off. No, it’s all the free apps that are on there which excite me.

For instance, I have found a 24 hours a day, seven days a week, non-stop shark channel. Nothing but shark documentaries, all the time, for ever, for free. Tell me why, in a world where this exists, does anybody ever bother to watch anything else at all? Close down the BBC. Tell Sky to pull the plug. There are 24-hour shark docus available at the touch of a button. 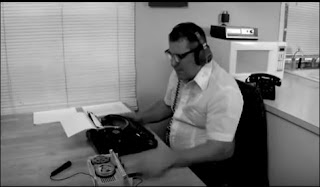 Or, if and when I ever do get bored of watching programmes about sharks, how about a channel which broadcasts nothing but music videos and comedy clips by ‘Weird Al’ Yankovic? It’s a thing. All Weird Al, all the time. I take back everything I have said about the modern world. Life is great and it’s going to be a happy Xmas after all. Plus there is an app that has a massive archive of old 1950s US TV shows. Despite not actually being either (a) American or (b) from the 1950s, this is like manna for me. I’m actually watching Jack Benny and Burns and Allen and The Adventures of Ozzie and Harriet and even You Bet Your Life. Some of these even have the adverts in them. LSMFT: Lucky Strike means fine tobacco!

As well as sharks and Weird Al and Jack Benny, there are also apps with free access to all manner of weird and wonderful (and sometimes deeply crap) movies. Indie stuff, public domain staples, borderline cases. Just so many movies to watch. And I started with this very, very strange indie sci-fi effort from just a few years ago.

Paul (John Varesio) is a middle-aged, unemployed guy who lives with his wife Svina (Catherine Johnson: Gabby’s Wish, Purple Mind) and grown-up son Kenny (Angelo Varesio, who has notably different coloured skin to the actors playing his parents). When Paul receives a parcel addressed to the house’s previous occupant, Tim Brown, he opens it and finds a bunch of oak leaves and a cocoon. Overnight, something breaks out of the cocoon: a weird creature like a cross between a beetle and a snail. Paul corners this and traps it in a glass jar in his garage, after which the thing starts communicating with him telepathically. 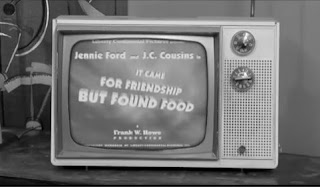 Svina and Kenny have been away up till now, visiting Paul’s mother. There is a whole load of stuff about how Paul was given up for adoption as a baby and only traced his real mother when he was 24, none of which seem to have any bearing on either character or plot. Once his family are back home, Paul keeps the door to the garage locked, claiming he’s working on a secret project.

What his family don’t know is that he has, on the instructions of the alien insect thing, been to the woods where he met a humanoid alien (called ‘Shelia’ although it sounds like ‘Sheila’!) that we previously saw in an unconnected splash-panel prologue. This addressed him as ‘Tim Brown’ (intended recipient of the parcel) and that is the alias Paul now adopts in finding victims for the aliens.

Initially he picks up a hooker (Vicky Anderson: Deep Dark); later he poses as a film producer, persuading two stoners to accompany him to a film shoot that needs extras. Where he’s actually taking these people is to a ‘hive’, a huge termite-mound-like structure in the depths of the forest where six-foot versions of the snail-beetle thing fly around (without wings) and prey on unwary humans. Later Paul takes Kenny fishing and returns home alone, telling Svina he dropped their son off at a friend’s. 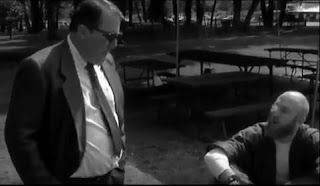 Here’s where it starts to get really strange. Svina has become suspicious so has smashed the padlock on the garage door. However she doesn’t find the alien bug. Instead she finds a fairly large rock (about the size of a football) which she takes into the forest and throws from a bridge. Paul is furious when he discovers this because that rock was in some way special to him. Suddenly the two of them are magically in the clearing beside the hive where Svina is attacked and Paul runs away, bumping into a young hiker. We previously saw this lad and his girlfriend on a trek through the trees, discovering a giant cocoon which, when sliced open, disgorged a bloodied human corpse. The boy was so shocked that he fell over a log and hurt his back; the girl went for help.

There’s no real conclusion to ICFFBFF. It just sorts of ends while the viewer is wondering what all that bollocks about a rock was in aid of. An epilogue has Kenny returning home – seems Paul did indeed drop him at a friend’s house rather than offering up his only son with a cry of, “I for one welcome our alien overlords.” The family cat Cloudy, who has featured in a surprisingly large number of cutaway shot over the past 95 minutes, has got into the garage, knocked over the glass jar and partially eaten the bug within, which Kenny then flushes down the toilet. To what extent that might stop the giant bugs and their bipedal herald from taking over the world isn’t clear.

It Came... is tosh. Ambitious, sincere tosh, but tosh nonetheless. Surprisingly, neither the one-dimensional characters nor the rambling, unsatisfactory plot constitutes the film’s biggest problem. Nor indeed is the budget CGI used to create the aliens a stumbling block. No, the biggest problem here is that the film has absolutely no idea what decade it’s set in. 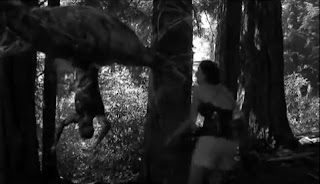 This seems to be the 1950s. It’s all shot in black and white. Paul drives a classic car. No-one has a mobile phone. The phone in the house is a traditional Bakelite, rotary dial model and the TV set (on which both Paul and Svina separately watch a movie called It Came for Friendship, But Found Food) is a small cathode ray tube television. When we first meet Paul he is typing up his memoirs, using a reel-to-reel audio recorder and a manual typewriter.

I’d love it if this all took place in the 1950s, the era of You Bet Your Life and The Jack Benny Program. But… the dialogue includes references to Keanu Reeves and Leonardo DiCaprio, and to something that happened “back in the seventies”. (Plus Svina drives a modern car.)

Before we see Paul typing his memoirs we have a brief scene of him looking at a bridge, dictating into the reel-to-reel recorder a note that his grandfather died in an accident while constructing the bridge in 1912. Let’s work out how that could be true if this 2010 film is set in 2010. Paul has a grown son so he’s probably about 45-50. For his grandfather to have died in 1912, even if the intermediate parent was a newborn at the time, said parent would have had to be about 50 when Paul was born. Which is possible but unlikely. A date of late 1950s or early 1960s makes much more sense. 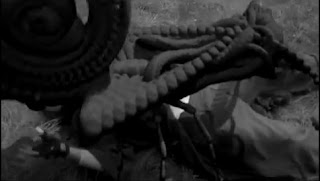 This could well have been shot over a period of months or even years, but as the creation of a single film-maker, you would think that it would at least have been consistent in its setting. Either you’re making a retro, historical picture or you’re telling a story in the present day. Make up your mind.

That one-man-band film-maker is Oregon-based Guy Gilray, whose only other movie is 2006 feature Scream of the Sasquatch (which shares several cast with this). He’s primarily a painter, having exhibited with some success at galleries in Portland in the 1990s. Specialising in ‘nocturnal urban landscapes’, he eventually got fed up of painting the same thing so turned his talents in other directions, thus: “First I made two independent feature films, losing about $17,000 in the process and eliciting many negative comments from the people who have actually seen them.” This was followed by an attempt to create digital illustrations for science fiction book covers and six CDs of instrumental music, neither of which projects could be accurately described as ‘successful’. Now he’s back painting again. I admire both his tenacity and his honesty. 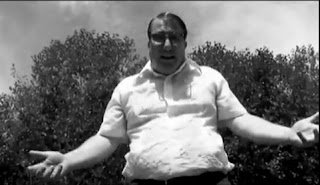 Produced in 2010, It Came… was posted onto Archive.com in October 2014 and has had 18,000 views to date. Two years later it was posted on a YouTube channel called Watch Public Domain Movies; this has been watched about 320 times so far. There are two other versions on YouTube which between them have generated 40 views. Which is not great but still 38 more people than bought the poor bloke’s CDs.