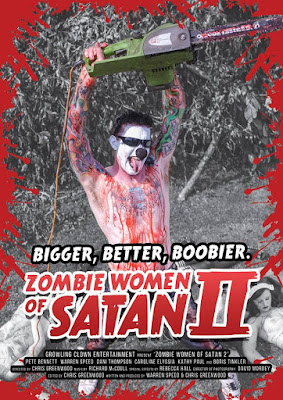 It’s just as puerile, no less vulgar and equally sexist. I bloody loved it.

Just like its predecessor, Zombie Women of Satan 2 is a sort of three-way bastard stepchild of Rocky Horror, Dawn of the Dead and Viz comic. It takes no prisoners, doesn’t give a wet slap what people think, and has no truck with concepts such as good taste or restraint. But at the same time, it has well-drawn, sympathetic characters, a coherent and well-structured plot and a solid awareness of its own limitations and how to work within them.

I love the ZWoS films, me. And I really love Pervo the Clown, a magnificent and surprisingly subtly nuanced character fully inhabited by young Mr Speed. Pervo is vain, childish, bombastic, arrogant, selfish, over-confidant, naïve, dependent, loyal, disloyal. He actually reminds me a little of Zaphod Beeblebrox, and I’ll explain why. 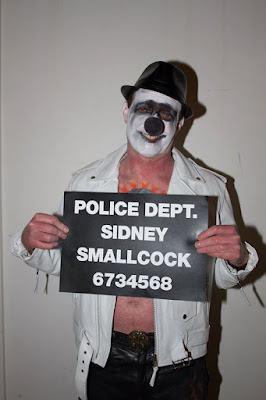 In my previous life as the world’s leading authority on The Hitchhiker’s Guide to the Galaxy (my book Hitchhiker: A Biography of Douglas Adams is available from all good charity shops) I came across a quote from Adams describing part of the inspiration for Zaphod. It was a Cambridge room-mate named Johnny Simpson (no relation) who put a great deal of effort into appearing really relaxed and chilled. In Hitchhiker's Guide that aspect of Zaphod is perfectly encapsulated in the scene when he realises one of the people being led up to the Heart of Gold bridge by Marvin is his semi-cousin Ford Prefect. Looking around the room, Zaphod ponders out loud: “Which is the most nonchalant chair to be discovered in?” (This is also, incidentally, a beautiful example of the Wodehouse-ian transposed adjective.)

In a similar vein, Pervo has a deep, many-layered personality, most of which is put to use deliberately making himself appear as shallow as possible at all times. Pervo is a character played by Sydney Smallcock (played by Warren Speed). When he puts on the face-paint and the nose, he becomes Pervo. He never removes the face-paint (and you don’t touch the nose). Pervo is an artificial construct, created to mask Sydney’s existence, and below the surface Sydney’s metaphorical duck’s feet are paddling frantically to maintain the consistent illusion of the egotistical, sex-mad rock-star clown. He puts a lot of effort into giving the impression that he never lifts a finger. He cares passionately about convincing people that he doesn’t care. It’s entirely possible that Sydney Smallcock no longer actually exists. Peter Sellers sometimes admitted to interviewers that he had played so many characters, inhabiting them so fully and making them so real – from Bluebottle to Inspector Clouseau and beyond – that he was no longer certain who he, Peter Sellers, actually was. One of the early biographies of Sellers was called The Mask Behind the Mask. I see very definite parallels with Pervo the Clown.

So what is Pervo up to this time? After the events of the first film, he became something of a media celebrity, feted by the trashier tabloids for his part in rescuing people from a zombie massacre. There’s a nice bit of recursive intertextuality in comments about a film, called Zombie Women of Satan, which dramatised these events and in which Pervo played himself. Or with himself. 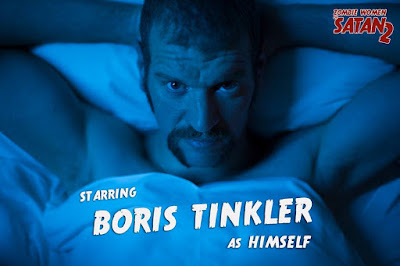 But the black-nosed one’s penchant for the baser things in life – drugs, booze, prostitutes, boozy prostitutes, snorting drugs off prostitutes who are drinking booze – has left him bankrupt. Between them his long-suffering PA Kat Meyer (Nadia Wilde: Mark Macready and the Archangel Murders) and his moustachioed bodyguard Boris Tinkler (“as himself” although the IMDb identifies him as this film’s stunt choreographer Ian Brown) keep Pervo’s life on approximately the right track. Kat is just a day away from ending her contract, while Boris is unaware that Pervo carries a bromantic, Brokeback torch for him. Actually Pervo is also unaware of this gay devotion, not because he’s repressing it but because his life is so chaotic and packed with sexual urges that one more just doesn’t register.

Salvation for Pervo comes in the form of Bertie Dumble, an eccentric millionaire nightclub owner who wants to throw our hero an enormous, boobs-filled party. Dumble is played with undisguised glee by Pete Bennett (credited as Pete Alexander Bennett) whom you may recall as that bloke on Big Brother who had Tourette’s and who is now a bona fide British horror regular. He’s in all three of John Williams’ features: The Slayers, The Mothertown and the forthcoming Crispy’s Curse. He’s in David VG Davies’ eagerly awaited zomcom Meet the Cadavers. And he’s in three Warren Speed gigs: this, Clown Syndrome and All Clowns Must Die (featured in a post-credits teaser here under its original title of Coulrophobia). 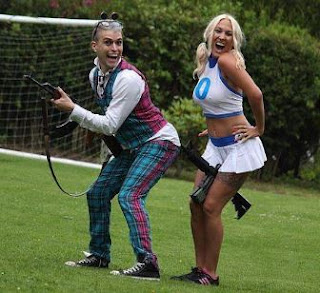 Anyway, what Pervo neither knows nor cares about is Bertie Dumble’s ulterior motive. Dumble is in a bizarre, fetishistic relationship with Octavia Zander (sometime ‘Satanic Slut’ Caroline Elyssia), surviving sister/daughter of the family who were killed in the first film. Out for revenge, she is working with mad Bertie, insane Cuthbert ‘Uncle’ Zander (Colin Cuthbert: Thugs, Mugs and Dogs) and pathetically loopy Florence ‘Mother’ Zander (Kathy Paul, reprising her role) who doesn’t want anyone to harm her “sexy clown man”. Octavia’s plan is to lure Pervo to the nightclub with the promise of a whole gaggle of ‘Pervettes’ then turn everyone into zombies with drugged punch. An anti-zombie spray will keep the Zander clan safe.

But that’s not the only danger facing Pervo. Fan-fave Dani Thompson (Banjo, Three’s a Shroud etc.) is Zara, leader of a squad of kick-ass, PVC-clad call-girls called the Bad Habits, hunting down a certain clown who owes them money for ‘services rendered’. It goes without saying that about halfway through, all hell is let loose – not to mention an entire coachload of sexy zombie women. The film does a grand job of whittling down the survivors in its action-packed second half, with people we care about and expect to survive falling prey to the topless gut-munchers. ZWoS2 is a hoot, a sexy, silly, subversive panorama of blood, boobs and over-the-top acting that will have fans of the first film grinning from ear to ear. It’s technically well-made with cinematography by David Mordey (The Making of Soul Searcher) and editing by Ben Davison Cannings and Chris Greenwood who shares writing, directing and producing duties with Speed this time round, the first film’s co-director Steve O’Brien restricting himself to an executive producer role.

The cast includes Kookie Katana, Moon Blake and Laura Jayne Carson (‘Laura Pandora’ in the titles, ‘Laura Carson’ in the credits) as the other 75% of the Bad Habits. Katana and Carson are scheduled to reprise their roles (or at least, do something similar) in a picture called Katana being prepped by Action Film and Photo, the company who provided this movie’s weaponry. Tammy Nowell plays actress Dahlia Von Rose, part of Pervo’s entourage, while Ash Robertson is Pervo’s nemesis, rock star Dikki Lixx. Stuart Adams (Soldiers of the Damned) is a psychiatrist; ‘alternative horror-streaked glam punk’ band Spit Like This perform a song at the party; Martin Palmer in his drag persona as ‘Crystal Meth’ is a TV show host; and one of the 50 or so zombies is Faye Ormston from Flowerman. 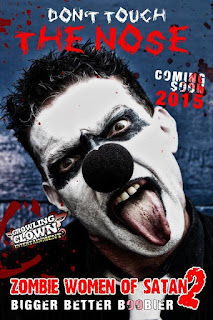 The Mighty Boosh’s Mike ‘Not Noel’ Fielding has a bit part as a Satanic high priest. Despite what the IMDB claims, Victoria Broom and Victoria Hopkins from the first movie are not in this one, although they did film scenes for it (included in the DVD extras) and are listed among the thank-yous. Rebecca Hall (Dark Signal, Ibiza Undead, Cruel Summer) was lead make-up artist.

Originally shot (at various locations around the North-East) in July 2012, the initial cut of ZWoS2 was reworked with new scenes filmed in August 2013, plus some final pick-ups in January 2014. It was eventually released on DVD in October 2016, initially available exclusively from Speed’s Growling Clown Entertainment website, with a festival premiere in January 2017 at Horror-on-Sea. A US release through Chemical Burn Entertainment is scheduled for February 2017, retitled Female Zombie Riot. The first film was released in Japan and I'm sure they'll go for the sequel too.

In a world where so many zombie or slasher films seem to be cut from the same cloth, Speed/Pervo provides a welcome and distinctive respite. I thoroughly enjoyed this film, though I do appreciate that some people will hate it. Fuck ’em.