Two things you should know, right off the bat. Although subtitled A Scary Movie, Stalking Hand is an out and out comedy and not actually scary at all. That is, I suppose, the joke. Also, the extraordinary and quite unique image on the front of the DVD sleeve is actually in the movie. It doesn’t make any sense but it’s a very cool make-up effect which has certainly never before been done so the hell with story and the laws of physics, let’s stick it in there.

A prologue finds two young folks making out in a car. Johnny (Bill Randolph: not the guy from Friday the 13th Part 2) wants a “just a kiss” (yeah, right) but uptight minister’s daughter Mary Joe (Emily Arner) doesn’t want to be touched. When he accidentally rips open her blouse, she runs home to Daddy. From this, we cut to a crime scene where the cops are investigating three dead bodies: the young man died from loss of blood after his hand was cut off, the young woman and her father were both strangled. And the odd thing is that the hand in question is missing...

But never mind all that because it’s time to meet our main characters: dumb jocks Derek and Kenneth (Kevin King and Chris Jenkins) and their girlfriends, cynical brunette Cassandra (Lori Morsch) and blonde bimbo Kiki (Danielle Krull). Bored with watching the guys play basketball, the girls demand that they do something special and a plan is hatched to hold a Halloween party. Part of the deal is that Derek and Kenneth will find a date for Cassandra’s spooky goth chick cousin (Leslie Levine) who calls herself Morgana and speaks with a dubbed, bass voice. The guys pick local spod Charles Drelman (Dustin Gilroy) but warn him that he and the goth must keep out of their way.

To get the girls ‘in the mood’, Drelman is persuaded to recount the story of Johnny and Mary Joe which happened exactly one year ago. A lengthy flashback sequence begins with a repeat of the two-minute prologue (which probably wasn’t necessary) and then the subsequent events. Mary Joe (who isn’t wearing a bra and never bothers to refasten her blouse) runs to her daddy (Doug Palmer) who gets a chainsaw, much to the consternation of his wife (Lena Miller). The mad minister is determined to take revenge on the boy for daring to lay his hands on Mary Joe so he revs up the saw and cuts Johnny’s hand off, resulting in copious quantities of fake blood squirting everywhere.

As the ‘party’ progresses, Drelman and Morgana find themselves locked out of the way in the basement. However, Morgana has only to make a call to Satan on her cellphone to conjure up the ... dah, dah, dah! ... stalking hand, which proceeds to wreak bloody vengeance on the cool kids upstairs. This includes a bathtub electrocution and a hilarious death-by-cigarette-lighter.

The situation is resolved by the arrival of two cops whom we have previously met, one of whom (played by Russ Hurley) looks vaguely like Elvis and tells everyone who will listen that he is the only true son of the King of rock’n’roll. The Elvis connection becomes more significant at the film’s climax. (The other cop is played by Levine’s father Art, while the make-up effects are handled by her brother David.)

Stalking Hand (which dropped The from the title somewhere during production) is good, harmless fun. It has been shot cheaply on video and the effects are distinctly budget-priced, with the ‘severed hand’ mostly represented by simply framing it so that we can’t see beyond the wrist. However, there are a few shots where the hand’s owner has been removed by green-screen or some other technique and these are surprisingly effective. The cast are mostly good and the weaker ones get away with it because of the broad burlesque nature of the script. Characters are fairly simplistic but there is a nice gag in understated homo-eroticism of the relationship between Kenny and Derek. It’s not quite Brokeback Mountain, but it’s leaning that way... There is also a truly weird interlude with a couple next door to the party house, the wife being an uncredited actor in drag with huge balloon fake bosoms. 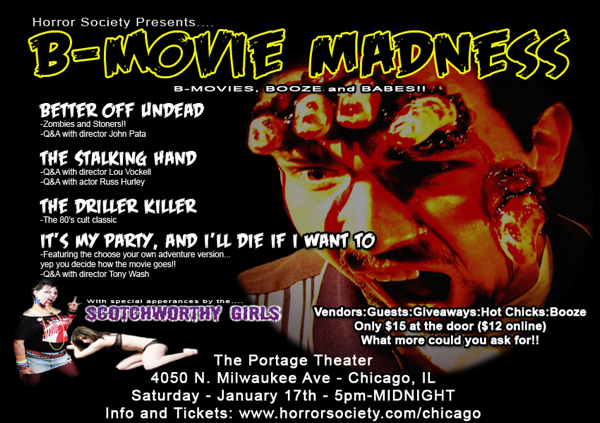 However, the oddest thing about Stalking Hand is the sound effects. I was surprised to find (although you won’t be, having read this review), that Vockell has peppered the entire film with cartoon-like foley work. Almost every movement is accompanied by a rattle, gurgle, squeak or similar noise. It’s a bit like watching the film with a couple of friends who stopped off on the way to the cinema at The Swannee Whistle Shop and Snare Drums R Us. This is a little overdone, to be fair, but it never becomes distracting and it certainly leaves one under no illusions about how seriously this ‘scary movie’ should be taken.