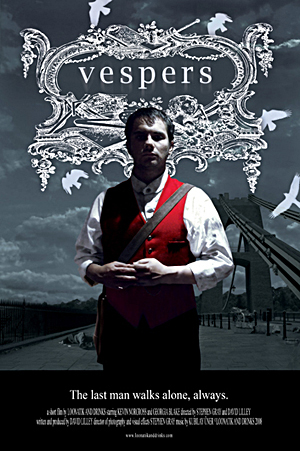 Vespers is a lovely little film. At just short of six minutes, it’s brief but not as brief as other Loonatik and Drinks shorts starring Mr McKinley or Lucy Spook. It’s not silent and not entirely wordless but you couldn’t really say there’s any dialogue. What there is - and it’s what we’ve come to expect from Messrs Lilley and Gray - is a stylish film with some superb visual effects that demonstrate what can be done for tuppence ha’penny on a home PC now.

Set in Bristol in 1880, this is a Victorian post-apocalyptic tale, something which I’ve certainly never seen before. In this sort of 19th century I am Legend, a solitary man (Kevin Norcross, normally employed as a graphic artist) wanders through the deserted city. Jackdaws and rats congregate around corpses in houses and in the streets, victims of a virulent plague which has wiped out humanity.

As the man searches for life, calling out in the desperate hope that he is not, in fact, the last man on Earth, he finds himself at the Clifton Suspension Bridge. The towers stand, the cable hangs between them and part of the span sticks out above the River Avon - but this is an engineering project never to be completed. This is a marvellous effect, shown from different angles in several shots, and is only marred slightly by the fact that the bridge was built in 1864. 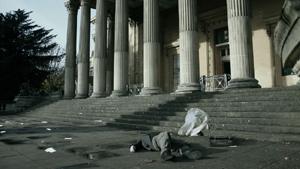 Then - miracle - he sees a woman. They run to each other and both become victims, in their own way, of the cruellest of ironies. To say more would be to give away the brief plot.

Jointly directed and edited by Steve and Dave, Vespers looks simply magnificent, every angle chosen - and, where necessary, manipulated - to create a thoroughly believable deserted Victorian Bristol. Mr Lilley wrote and produced while Mr Gray handled photography - assisted by camera operator Simon Fretwell (DP on Close Your Eyes) - and visual effects. Together they have created a thing of beauty.

While it’s more than the single-gag 'plots' of the Mr McKinley or Lucy Spook shorts, the ‘story’ of Vespers is just a moment, albeit a crucial one. Actually, that’s not fair. The plot is just a moment but it’s constructed in such a way that the story is obviously much greater. In that respect it also scores over L&D’s last short, The Hand. But the frustrating thing about Loonatik and Drinks films to date is that they are so brief. I like to think that this is the guys practising their skills, ready for something meatier. Adaptations of Conan Doyle’s ‘The Horror of the Heights’ and Poe’s ‘The Pit and the Pendulum’ are promised and with such source material a more cohesive and satisfying plot is surely assured. 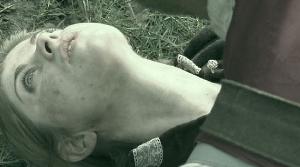 Georgia Blake plays the woman, credited only as ‘victim’ although Georgia’s CV reveals that the character’s name is Helen Winshaw! Rachel McWha (“creator of designer corsetry, costume and bridal couture”) was responsible for the costumes while the fantastically named Nikki Galan-Bamfield (Loyalty, The Return) handled hair and make-up. Kubilay Uner (The Hand) composed the music and Barry Parsons was the sound designer.

Vespers is an impressive, original, visually enthralling slice of retro-fantasy. More than that, it’s that rarest of things: a Victorian-set science fiction film which is neither a pastiche nor steampunk. All credit to those involved; now bring on the Conan Doyle and the Poe.