The Haunting of Baylock Residence 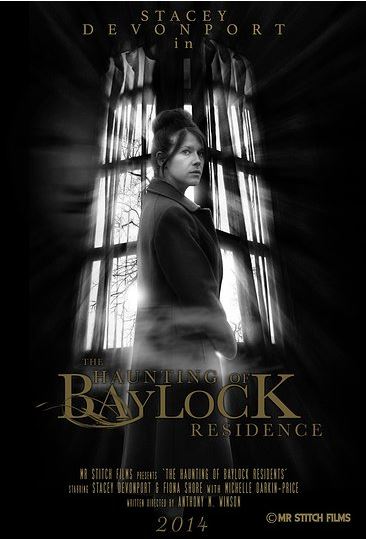 Baylock is not a common name. Wikipedia doesn’t bother having a ‘Baylock disambiguation’ page because there’s only one person of that name who has their own page - American jazz composer Alan Baylock (b.1967). I can find references elsewhere to baseball coach turned commentator Andy Baylock, Sydney University academic Brandi Baylock and an artist named Paul Baylock. But it is in no way a common name.

So it is a truly bizarre coincidence that spring 2014 saw the appearance of two British ghost films in which the principle deceased character was named Baylock. On the one hand, we have Darren Flaxstone’s Dark Vision, about TV ghost-hunters investigating the caves beneath ‘Baylock’s Folly’, named after medieval plague doctor 'William Baylock'. And on the other we have Anthony M Winson’s The Haunting of Baylock Residence, in which a much more recently deceased character is named 'Susanna Baylock'. What are the chances?

The only guess I can make is that both names were inspired by the character of Mrs Baylock in The Omen, the housekeeper who was played by Billie Whitelaw in the original and Mia Farrow in the remake. Still, it’s remarkable synchronicity given that more than 500 British horror features have been made in the last 15 years and, to the best of my knowledge, the name Baylock doesn’t appear in any of the others. (There is also a supposedly haunted house in Pasadena called the 'Blaylock Residence' - I don't know whether that may also have been an influence.)

In this film, Susanna Baylock (Lindsey Parr) lives in a three-storey Victorian villa with Annabel Blair (Fiona Shore) who is described as her maid but is arguably a housekeeper, if we’re being precise. Susanna starts the film by falling downstairs and breaking her neck, prompting the arrival a short time later of her estranged sister Patricia Woodhouse (stage actress Stacey Devonport making her feature debut).

The set-up here is, let’s make no bones about it, unbelievable. Patricia is said to be Susanna’s only living relative, yet she was evidently not informed immediately of the death, not invited to the funeral, and hasn’t even been told how her sister died. Yet she has somehow inherited the eponymous ‘Baylock Residence’. None of this makes a lick of sense but fortunately ‘set-up’ is all this is, and before long we progress to the good stuff – the haunting.

Winson does a great job of wringing real spookiness and fear out of very simple things. There are no digital effects anywhere in the film except for a couple of ghostly fade-aways. Everything else is done by suggestive noises off or simple physical tricks: a door closing by itself, a book knocked off a shelf, someone or something not being where we (or Patricia) think it is. At first, Annabel dismisses Patricia’s claims of supernatural phenomena but then she starts to witness them too. Patricia does some research at a local college and determines that the problem is not a ghost or a poltergeist but an ‘entity’, which is explained in some detail.

All of this is shot, for no obvious reason, in black and white. And here’s what puzzled me: I couldn’t work out whether this story was taking place in the present day or Victorian times. Annabel’s hair-bun and shawl for example make her look distinctly 19th century (and who has a 'maid' now?), but some aspects of the film were very obviously contemporary. Then, about half an hour in, Patricia visits Susanna’s grave and we discover that she died in – and therefore presumably the story is set in - 1971!

With that information, I started to appreciate a little more the impressive effort that has gone into the production design of this fiver-and-change motion picture. Patricia’s dress is suitably old-fashioned, without being stereotypically seventies. There are no DVDs on the shelves, there’s no TV and the radios on display are suitably vintage. Much of the house is decorated in a Victorian style but that’s okay. What people often forget is that, in any decade, much of the décor hails from earlier decades. There were certainly plenty of quasi-Victorian homes around when I was growing up (I was three in 1971), especially family homes because of course the older generation in those days actually were Victorians. 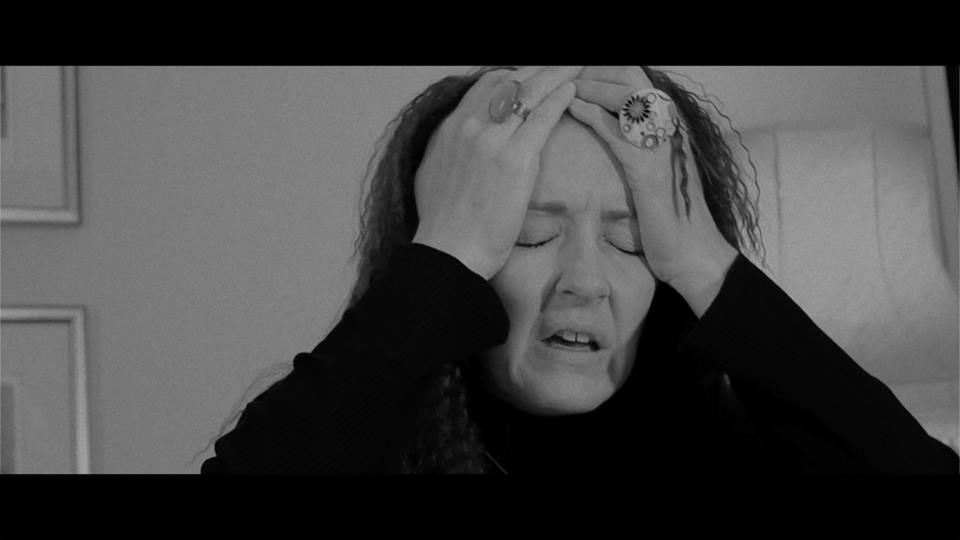 So in all fairness to Winson and his ‘Mr Stitch Films’ team, they have made a sterling effort to provide a 1970s ambience and for that are to be commended. Of course, there are always going to be little anachronisms which cannot be avoided without building a set from scratch. All the light-switches, for example, are of the modern ‘rocker’ type rather than historically accurate ‘toggles’. There is no disguising the smoke alarm on the ceiling, or the design of the ‘fire exit’ signs in the college, and a brief shot of Patricia on a train is very, very obviously a 21st century carriage. (There is also, for some inexplicable reason, a framed issue of Spider-Man Weekly in the bathroom, which is completely out of whack with the rest of the house’s largely post-Victorian furnishings. As any fool knows, this journal of renown did not begin publication until February 1973, thereby completely destroying any credibility that this story takes place in 1971. What were they thinking?)

Once we know the story’s date, things become, if not clearer, certainly less distracting and we are able to concentrate on the plot and characters. I am mystified why there is no opening caption identifying the year (the more so, in having seen this just a few weeks after Hacked Off, which managed to have a caption which was out by ten years, causing problems all of its own). The 1970s setting explains, I think, the monochrome photography since it is easier to hide the colour saturation of the 21st century than try to disguise or excuse it. What isn’t explained is why the story is actually set in 1971; I have wracked my brains and honestly cannot think of any changes which would be required were the film to be set in 2014… 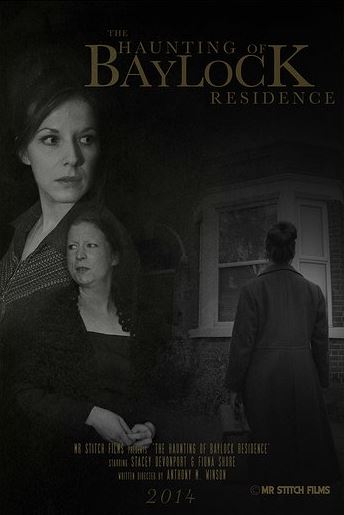 The plot to which we return, but which I don’t want to delineate in detail for spoiler reasons, involves Susanna’s husband Victor (David ‘dwyz’ Wayman, director of numerous shorts, music videos and fan-films) who was responsible in some way for the estrangement of the sisters and who apparently disappeared without explanation a few years ago. There are a number of ghosts seen in the house, including a little boy and a woman with a noose around her neck. In desperation, Patricia brings in Lilly (Michelle Darkin Price), the sort of spooky hippy who would have been a goth if we were not, in narrative terms, still 14 years away from the first Sisters of Mercy album. Lilly is genuinely psychic, it seems, but then the house is evidently genuinely haunted.

Together, Lilly, Annabel and Patricia uncover the house’s dark secret and find out (sort of) what happened to Victor. As so often, I’m not 100% convinced that it all fits together and makes coherent sense, but it’s a reasonably satisfying ending because some enjoyably bleak narrative strands are resolved (or otherwise), thereby adding to the overall air of British suburban supernatural miserablism.

Nottingham-based Winson has made several horror shorts over the past few years, gradually increasing in length, complexity and ambition. Apparently work on this film actually started several years ago, when it was entitled The Diary of Patricia Woodhouse, but all the footage was lost in an unfortunate computer error. Winson then concentrated on his shorts before returning to Baylock Residence in 2013. This picture, which had a premiere screening in February 2014 and was released onto YouTube two months later, is the first Mr Stitch movie to reach the magical (if arbitrary) 70-minute mark that still defines a feature, even in these post-Blockbuster days. A second feature film, Ominous aka House of Afflictions, is currently in post. 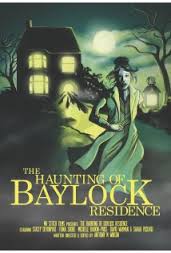 As is often the case in situations like this, he has built up a little rep company and many of the cast have been in one or more of his other productions; several were also in Zombie Hood. As is also often the case, this means that the director has cast based on the people he knows, rather than widening the net to find new, perhaps more suitable (or better) actors. In all honestly, some of the acting is really not up to scratch, while some is okay but won’t win awards. What really carries the film however is Devonport. She is terrific in the lead role, conveying real fear as the supernatural takes hold around her. In one scene she is even required to throw herself about on a bed as Patricia is physically assailed by an invisible force; this sort of thing is extraordinarily difficult to carry off without looking ridiculous, but through some combination of Winson’s direction and Devonport’s performance, the scene works, and works well.
Ghosts seem to be increasingly in vogue in British indie horror nowadays, with films like The Library, Dark Vision and Any Minute Now tipping their hats more towards Algernon Blackwood than George Romero. Perhaps this is a response to the success of NuHammer, a melding of traditional MR James-ian gothic ghost tales with a contemporary (or at least, non-gothic) setting. However, I for one much prefer something like this, made with real care, passion and affection for the genre, to the risible pomposity and by-the-numbers fake Gothicism of the over-rated Woman in Black.