Italian horror cinema has a long and proud history. In no other country has horror been such an intrinsic part of national cinema. Not fantasy (there’s plenty of that too but it’s best left alone) or science fiction (again, best avoided) but genuine, scary, bloody horror. Italian horror movies date back to the silent era but really came of age in the 1950s, just as horror was also coming to the fore in the UK and on the seedier side of Hollywood. Argento, Fulci, Bava pere et fils, Michele Soavi, even trash barons like Ruggero Deodato or good old Joe D’Amato - what other country has produced so many iconic scare merchants over the years?

I say let’s add Ivan Zuccon to that list. And let’s add him up there at the better end with Fulci, Argento (when he was good) et al. Because Unknown Beyond confirms that The Darkness Beyond was no flash in the pan. Zuccon is a major horror talent and he’s here to stay (for further proof, check out his third feature, The Shunned House). 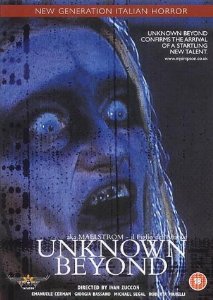 Darkness was written by Ivan himself but this semi-sequel was scripted by Enrico Saletti so there’s something of a change in tone, though it’s still unashamedly Lovecraft-ian. It’s a more complex story, with more characters - there’s more action and more interaction. Also a whole heap of religious iconography, stirring up that whole Catholic guilt thing that underlines some of the best Italian horror. The opening sequence is amazing as a stumbling soldier comes across a crucified man and, at his feet, a pram containing a crying baby which, on inspection, turns out to be a reel-to-reel tape recorder. Blood drips from the sky, then rises back to Heaven. What the jiminy is going on?

One thing which Unknown Beyond definitely shares with its predecessor is a dreamlike structure which plays fast and loose with causality and the sequence of events, indeed with reality itself. The Old Ones-engineered supernatural apocalypse that we glimpsed in the first film has enveloped the world, but now we are a generation on and Captain Ian Hicks (the ever reliable Emanuele Cerman) leads a small band of survivors hiding out in some catacombs.

Cerman was Private Randolph Carter in The Darkness Beyond - and Hicks is having dreams in which he is called by that name. Is he the same character? Who knows? Locked up in a cell in the catacombs is a painted-face witch, Keziah (Roberta Marrelli, who was Elena in the first film), who serves the Old Ones and seeks to seduce Hicks. Meanwhile two members of the group, Valerie (Liliana Letterese) and Pickman (Alessio Pascuti - Private Walker in Darkness) have gone missing. 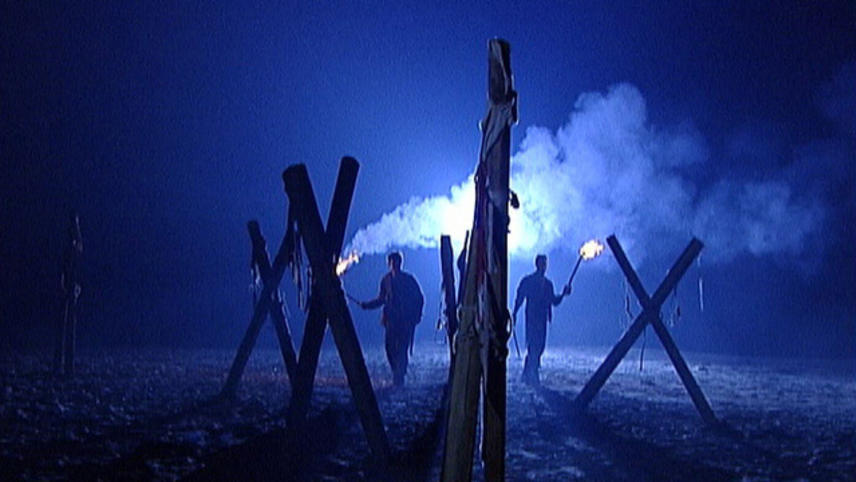 Walker turns up, transformed into a mad demon but roped and held by two of the soldiers. For a moment the film looks remarkably like the scene with the captive zombie in 28 Days Later but I’m sure that’s coincidental as it’s unlikely that Alex Garland or Danny Boyle would have seen Ivan’s film. Walker is locked up in another cell.

Valerie, wandering across the desert at night, is gripped by hands from under the sand and raped by something unseen. She subsequently slakes her thirst at a river of blood, from which she fills her canteen. A day or so later she is back with the main group.

Hicks has translated some surviving parchments (possibly the ones created by Al-Caleb in the first film’s prologue) and knows that the only way to defeat the Old Ones is to find the Necronomicon. He sets out with two comrades, Alan (Piergiorgio Schiona) and Boris (Francesco Malaspina - Darkness Beyond’s Sgt Clark). Back in the catacombs, the swiftly pregnant Valerie gives birth to an ultra-fast growing cocoon from which emerges, only minutes later, a full-grown man. Played by Michael Segal, the first film’s Lieutenant Salgari, this character is credited as ‘il figlio dell’Altrove’ - ‘son of the beyond.’ Indeed, the Italian title of this film is Maelstrom: Il Figlio dell’Altrove (the working English title was Call of the Beyond). He proceeds to bloodily slaughter his way through the cast. 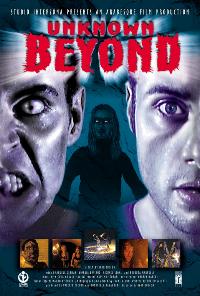 What the film is leading up to, via some quite startling imagery, is a three-way battle between Segal’s character and the unborn children carried by sole survivor Anouk (Giorgia Bassano - that’s not a spoiler by the way as she’s not identified by name until late in the film) and Keziah. Three will be conceived, the prophecy states, but only one will survive to become heir to the Old Ones...

With an extra twenty minutes’ running time over the first film, Unknown Beyond can cram more in and that may be why it seems slightly less languorous (or more hurried, depending on how you look at it). The main characters are well-defined and we care about what happens to them - although I’m still not certain about Keziah the witch. Marrelli comes close to overacting sometimes in a role which is, I think, a difficult one for foreign audiences to grasp.

There are some amazing setpieces, including a whole field of tortured souls on cross-frames, and also more action with some well-choreographed fight sequences. This film is more obviously shot on video than Ivan’s first movie, and is almost entirely set at night: a couple of scenes about 50-60 minutes in are the only daylight exteriors in the whole film. Sometimes initially confusing, the plot does unravel well, revealing hidden motivations: “Deception has always been evil’s stock-in-trade,” says one character, observantly. Although this film shares numerous cast and crew with The Darkness Beyond the actual plot connections are tangential and watching the first film is not necessary to enjoy this one. Though I would of course heartily recommend watching both just because they’re so good! (A tip of the hat also to Nicola Morali whose music perfectly creates the spooky, unnerving mood that the film requires. Nicola kindly sent me a CD of the Unknown Beyond soundtrack a while back and it’s a truly excellent piece of work.) 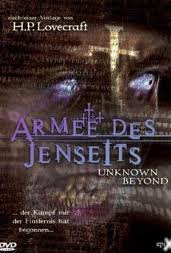 There was a time when Italian horror cinema was the finest in the world. But the last spaghetti scarer to really achieve international acclaim with critics and audiences was Michele Soavi’s superb Dellamorte Dellamore and that was nine years ago. Since then, what have we had? Pupi Avati’s obscure The Arcane Sorcerer, Sergio Stivalleti subbing for the late Fulci on Wax Mask, Massimiliano Cerchi’s laughably inept Creatures from the Abyss and Satan Claus, Argento treading water with The Stendhal Syndrome, Phantom of the Opera and Nonhosonno - and let’s not even mention the justifiably derided Fatal Frames. The genre needs a shot in the arm - and here it is.

Unknown Beyond confirms the arrival of a startling new talent. Ivan Zuccon is the best thing to happen to Italian horror, arguably to horror cinema in general, in a long, long time.