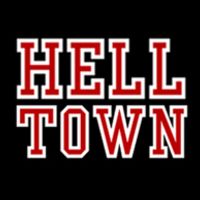 For those of us who have been following Steve Balderson’s career, Hell Town is exactly what we have come to expect, in that it is completely unexpected. For starters, it’s a horror film. A black comedy, certainly, but revolving around a serial killer, and some of the deaths are quite unpleasant and gruesome (in a blackly comic sort of way).

Steve’s work has bordered on horror before: Pep Squad was a tale of high school psychopathic murder dark enough to play at genre festivals like Fantasporto (where I saw it, and first met Steve’s producer father Clark). His sophomore work (and magnum opus), the stunning Firecracker certainly contained some disturbingly horrific elements, not least its Browning-ian use of real sideshow freaks. And before Pep Squad Steve even made an amateur, feature-length vampire film. But this is his first full-bodied horror flick.

It’s also a soap opera. Not figuratively or metaphorically but literally. Taking the concept of the three-act structure to its logical conclusion, Steve and co-director Elizabeth Spear have fashioned the story as three consecutive mid-season episodes of a fictitious TV serial, including opening and closing credits (inspired partly by the modern habit of watching TV episodes back to back in a ‘box set’). The acting is deliberately mannered (as is the direction) but not over-the-top or played for laughs. We’re not watching Acorn Antiques here.

The story concerns two families: the Manlys and the Gables. Trish Gable (Krysten Day, a regular at Wamego’s Columbian Theatre) is the perky, peppy blonde prom queen looking to give away her “other virginity” to the right guy. Her bitter, jealous sister Laura is played by BeckiJo Neill in ‘episode 7’ and then recast without explanation from ‘episode 8’ onwards in the person of Jennifer Grace (Marybelle in The Casserole Club), who looks almost nothing at all like her predecessor. Bobby (Blake Cordell) is their slender, effete brother who is not entirely out. Moody emo BJ (Sarah Napier) and their father (Jeff Montague) complete the family. (Montague is missing from the IMDB cast list, possibly because of… well, you can google the guy.)

The Manly boys do their best to live up to their name by wandering around shirtless for much of the film. There’s Blaze Manly (Matt Weight, also co-producer: Ian in Occupying Ed), his brothers Butch (Ben Windholz) and Jesse (Owen Lawless) plus sister Chanel (Amanda Deibert, standing out among a strong cast). Deibert was Tiffany in The Far Flung Star and Lucy in Occupying Ed; she has horror previous including Andrew Muto’s Blood Runs Black and was even in a Creep Creepersin movie! Chanel is Trish Gable’s nemesis and, in a running gag, works in every dining/retail establishment in town. Of course, it wouldn’t be a Steve Balderson joint without a role for Pleasant Gehman and here you get two Plezes for the price of one. She is ‘Mother Manly’, lying comatose on a bed throughout, and also the scheming nurse who cares for her.

Among all the unrequited crushes, backstabbing bitchiness, repressed sexuality, sibling rivalry and general small-town angst, there is the little matter of the ‘Letter Jacket Killer’ who is offing local youngsters in a variety of sadistic ways. Well, I say ‘youngsters’ but in the grand tradition of American movies, all these ‘high school students’ are clearly in their mid-twenties. And within the artificiality of the soap opera conceit, that is exactly as it should be.

The two-headed directorial beast that is Steve and Liz manages proceedings with an acute awareness of both soaps and slashers, never missing a trick for a camera cliché, a hackneyed line of dialogue or an overwrought bit of plotting. It’s a truism that you have to be very good at something in order to effectively lampoon a bad version of that thing without yourself appearing bad, and that’s certainly the case here (the sine qua non of this principle is, in my humble opinion, the Bonzos track ‘Jazz, Delicious Hot, Disgusting Cold' – what do you mean, you’ve never heard it?). Anyway, Steve is of course a hugely talented and experienced film-maker whose career I have been following for the best part of two decades. Elizabeth Spear is a new name to me.

According to the IMDB (and with all the caveats such a phrase implies) she has made seven previous features since 2003, including dramas, comedies, a documentary, a war film; some of them co-directed with other people. It would seem from Hell Town that she meshes well with Steve B. But then a real TV soap would have different directors for different episodes anyway.

I’m no soap-watcher but I do like a nice slice of horror and Hell Town works admirably as a pastiche of the slasher genre, benefitting (I believe) from having been made by somebody who normally works well outside said genre. Far too many ‘slasher comedies’ are lamentably unfunny and self-indulgent: of interest only to obsessive slasher fans, the sort who don’t care about character, only about deaths. By presenting the tale of the Letter Jacket Killer as a slice of soap opera, Steve and Liz foreground the characters. And although some of the minor ones outside of the two main families have little time to register before becoming bloody corpses, we can infer that we would have known them a whole lot better if we had seen Season One and the preceding six episodes of Season Two. (There is an opening caption explaining that the entire first and third seasons on Hell Town have been lost, and I really hope that Steve makes a lot more of this fictitious ‘real story’ behind the series when he starts publicising Hell Town, mainly because there’s so much fun to be had there.)

Jake Jackson supplied the excellent special effects make-up for the various kills. This is his second film gig following a thriller called Erasure; he has also worked on stage productions of Shrek, Young Frankenstein and The Tempest. Nancy Cox provided the regular hair and make-up.

Several of the supporting cast were also in Occupying Ed and The Far Flung Star. Michael Page, Connor Lloyd Crews and Chris Pudlo all receive ‘additional writing’ credits. Cinematographer Daniel G Stephens, who has previously worked with both directors, credited here with ‘special photographic effects’, lights every scene with a TV sensibility that doesn’t detract from the movie experience. And an extra special treat for long-time Balderfans is the return to the fold of the legend that is Betty O, for the first time since Stuck!, here appearing as a TV news reporter. [It has been pointed out to me that, the IMDB notwithstanding, Betty O is in Culture Shock and Occupying Ed. My Betty O Fan Club membership card and badge are hereby shamefully returned... - MJS]

Hell Town is a hoot to watch and gives every impression of having been a hoot to make, which I think is characteristic of Steve’s films in this  part of his career. It’s not quite up there with the wonderful Occupying Ed, partly because the soap opera conceit necessarily robs the film of a layer of sincerity. On the other hand, I much preferred it to Steve’s two lightweight international capers The Far Flung Star and Culture Shock. It’s a real treat to see Steve working within the horror genre and bringing that unique Wamego touch to the tired tropes and corny clichés that we all know and love.