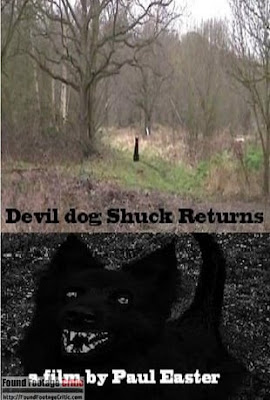 I have been familiar with the name and work of Paul TT Easter for some time. There are several of his films in my BHR masterlist. But this is the first one I have actually watched. And let me tell you, it’s bonkers

Not to put too fine a point on it, Devil Dog Shuck Returns is one of the most bizarre, distinctive, subversive, idiosyncratic, clinically insane slices of avant-garde cinema that has ever troubled my eyeballs. It really is like nothing that I have ever seen. Are all of Easter’s films like this? Jesus Christ!

For ninety minutes I wondered: “What the hell is this I’m watching?” But not in a bad way. This is an eye-opening film, not an eye-watering one. On the basis of this movie, I would venture to suggest that Paul TT Easter is one of those underground British auteurs, like Joe Wheeler or Tom Rutter, whose work will be rediscovered 20 or 30 years from now and hailed as pure cult cinema. Or, looked at another way, if Paul Easter had been making films like this back in the 1970s, there would be books about him by now and festival retrospectives of his career.

So what is Devil Dog Shuck Returns actually about? What’s it not about? It’s mostly shot POV, though I would hesitate to call it ‘found footage’ because there’s no sense of this being recovered film in the way that something like Exhibit A or The Dinosaur Project was (or indeed, Blair Witch or Cloverfield). There are references to the camera being used and indeed it’s often visible when we spot Easter’s shadow. But there are also more conventionally shot and edited scenes, as for example early on when Paul, playing himself, wants to buy a van off a bloke. Unable to reach a deal, the van driver departs and we see him in the cab talking with someone else on the phone.

Paul has – or has access to – a large area of overgrown land somewhere in the wilds of Norfolk were he and his mates can mess about with vehicles and junk. As indeed they do, the film turning into an East Anglian Jackass for a while as they skid cars, tow each other around the snowy ground on improvised sledges, and drive a car straight through the side of a large caravan, an unfaked stunt that some films would spend thousands on.

After some time, we watch Paul and one of his mates heading to a rave in the woods, except there’s no-one and nothing there. They do however find some clothes hanging on a tree along with an axe and a samurai sword.

None of this, I’ll grant you, sounds much like a horror movie. But the ‘plot’ as such has been set in motion by Paul receiving the startling news that he has a long-lost twin brother. And about half an hour in, we suddenly find Paul and his mate brutally slaughtered (off camera) by said twin.

Mr Easter spends the rest of the film, shirtless, playing his own retarded psycho twin brother who sets out to reclaim everything that was Paul’s, including his camcorder and his pooch, the eponymous and playful ‘Shuckie’. He enters Paul’s house, where Paul’s girlfriend is asleep on the bed, and gropes her in a scene which is the closest this movie ever gets to sex. But he also finds time to change his voice and do a spoof aftershave commercial when exploring a shed looking for a JVC camera charger. Probably oddest of all is that, while in his brother’s house, he puts on a DVD and watches scenes from earlier in the movie, including the incomplete van deal.

Being honest, Devil Dog Shuck Returns makes not a lick of narrative sense – but that is surely its strength. This is a trippy, unashamedly self-indulgent film, its very self-indulgence rendering it fascinatingly watchable as it offers an unadulterated view inside the mind of Paul TT Easter, an old-school auteur with a completely individualistic approach to cinema.

On an absolute scale, yes it’s complete rubbish and many people would turn it off after 20 minutes then head straight to the internet to register their disapproval. But cinematic appreciation is not absolute – that’s what keeps film critics in a job! Approached from the right direction this is a work of, not genius exactly, but certainly a work of maverick brilliance.

Devil Dog Shuck Returns was released online through Vimeo on Demand in February 2016. Paul Easter is now planning his own zombie epic which should be something to see…