Cleaver: Rise of the Killer Clown 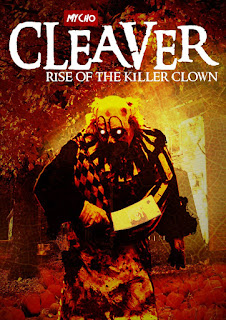 Director MJ Dixon and producer Anna McCarthy burst onto the scene in 2013 with the stylish (if occasionally formulaic) Slasher House. The always terrific Eleanor James was Red, a young woman being chased around a mysterious prison by three hulking cartoon psychos: a psycho with huge swords, a psycho with power tools and a clown psycho.

Big-swords-psycho got his own prequel the following year: the very entertaining and ambitiously structured Legacy of Thorn. Now two other characters have also got their own films, released simultaneously in August 2016. The young man who helps Red stars in Hollower (which I will watch and review shortly [And which turns out not to be about the Power Tools Psycho as I originally assumed - MJS]) but first here comes Cleaver: Rise of the Killer Clown.

Whereas Legacy of Thorn was Mycho’s homage to Friday the 13th, this movie openly references Halloween. In a small American town, on 31st October 1995, student Carley Lewis (Stephanie Price) misses out on a Halloween party in favour of a babysitting gig because she needs the money to pay her course fees. Carley offers to take her young charge Mary-Beth (Holly-Anne Dodkins) trick-or-treating but Mary-Beth’s parents say no – because of a recent murder. 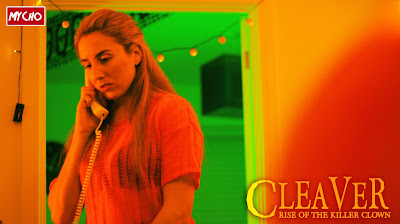 In a terrific prologue we saw another college student, Sara Allen (Kylie Slevin: Plastic Toys) getting brutally murdered by a clown-psycho. Her boyfriend Danny Jackson (Lewis Cooper) had just left – well actually he’s somebody else’s boyfriend which is why he sneaked out without being seen. Now he has disappeared and so he’s the prime suspect for the murder.

Sheriff Hatcher (Jimi Nix, a spear-carrier in The Hollow Crown) is on the case, assisted by his two deputies (Georgie Smibert and Gary Baxter). He thinks the killer could be Carlton Layton, a mentally unstable guy who became a children’s entertainer after he was laid off, then came home one day to find his wife being unfaithful. Well, of course it is Layton. He is Cleaver. And he is out for blood tonight. 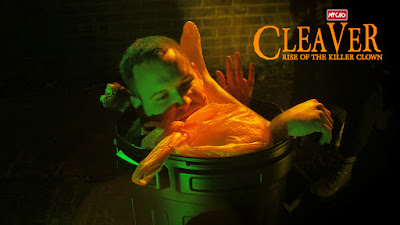 Like Dixon’s two previous released features (I don’t think we’ll ever get to see his debut Creepsville), Cleaver is drenched in almost Bava-esque colour - reds and oranges and greens - making every scene a painting. It’s a distinctive, attractive style which doesn’t distract from the storytelling. In fact, I think it adds to the film not just aesthetically but in heightening the unreality of what we’re seeing.

Because although this is set in the USA, it was filmed in England. And although Dixon and McCarthy do a sterling job of trying to convince us it’s the USA (and the cast generally manage pretty good accents; Price actually is American) the fact remains that it’s not the USA, we know it’s not the USA, we can see it’s not the USA. What it is instead is a cartoon USA, a slightly exaggerated, slightly hyper-real version of small town America. So yes, it’s a give-away every time we see a front door with a letterbox; yes, it’s a clue when shots of the Sheriff’s car are actually extreme close-ups of a dinky toy. But That Doesn’t Matter. This is not being presented as the real world, any more than Legacy of Thorn or Slasher House were. 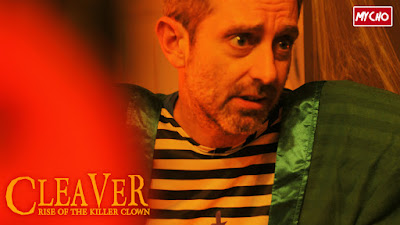 There is clearly some justification for setting this story in the States, although I’m not sure why it’s 1995. (Legacy of Thorn was variously set in 2008 and 2012). Again, I’m quite happy to say that It Doesn’t Matter.

Structurally this is less complex than Legacy of Thorn, limiting itself to flashbacks of Carlton Layton’s cuckolding – although all is not as it seems, even here. What appears at first to be a straightforward coulrophobic slasher turns out to have layers that are revealed in the third act. Not everyone is who we assume they are, or doing what we assume they’re doing. Plus of course there’s plenty of blood, decapitation and screaming. Interestingly, MJ doesn’t feel the need to play too much on Cleaver’s appearance. Where other clown-slashers might feel the need to show as much of their villain as possible, Cleaver lurks in the shadows. The prologue in particular is a very effective use of keeping clown imagery in the background and thereby actually increasing the horror. 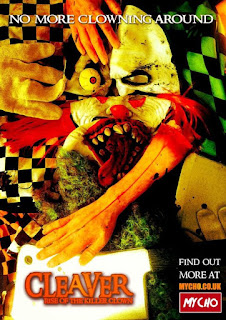 Although I probably enjoyed Legacy of Thorn slightly more, I think Cleaver is a more mature picture, with MJ honing his craft as his career progresses. It's certainly a cut above what the basic premise - nutter dressed as clown stalks town on Halloween - would suggest. Onwards and upwards now to Hollower and, after that, Slasher House 2.