Christopher Douglas-Olen Ray, son of Fred Olen Ray, gave me this e-mail interview in February 2007 after I reviewed his short film Time of My Life. 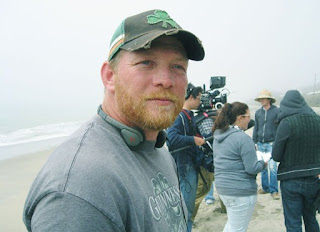 What circumstances led to the production of Time of My Life?
“Well, it actually was the most affordable short I could come up with. For a first time director I just wanted to see if I was able, ‘cause I am willing.”

What did you set out to achieve with this film and how well do you think you managed it?
“Wanted to show others what I could do. For a budget of 3K I feel like I accomplished exactly what I set out to do.”

What have you learned over the years from your dad and/or from working on his films?
“Patience. Lots of it. The willingness to adapt and overcome problems as they arise. But the key thing is to try and keep the cast and crew as happy as possible.”

What are the advantages and disadvantages of the ‘Olen Ray’ name, and any perceptions that might go with it, in trying to make it in the film business?
“Well that’s a good one. I have been asked recently if there was any relation. I guess the person I was meeting with was a fan of my dad’s. So I spent the next half hour talking about him. When I sit down and think about it there really isn’t any downside to it. He has been doing this for so long that people assume I have picked up something along the way.”

Why is now the right time for you to start making your own films?
“Well I have been trying to do something for the last two years. Just wasn’t happening. As a family, myself and my wife Robyn, we decided I needed some sort of reel to show. It wasn’t a matter of why now but why didn’t I do this sooner. I work for the government as an editor/photographer, so I travel a lot. That still is an issue but I am working it out.”

Now you’ve got my money, what are you going to do with it?
“We are working on a script now called Shadow of a Doubt. Don’t want to talk too much about it. As it stands right now we have raised a little over 2K. We are hoping to have raised enough money some time by this summer to start pre. We will see...”

Email ThisBlogThis!Share to TwitterShare to FacebookShare to Pinterest
Labels: 2012, director