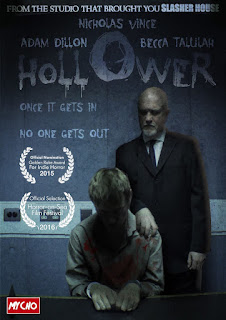 Released in August 2016 alongside Cleaver: Rise of the Killer Clown, Hollower is the fourth entry in the Mycho Cinematic Universe, an ambitious shared world of loosely connected characters, scenarios and stories which began with Slasher House and continued with Legacy of Thorn.

Right, that’s the links out of the way.

Hollower is MJ Dixon’s most mature work to date, less cartoonlike than the previous three and more interested in using characterisation, narrative and atmosphere to generate fear than simply being scary. It’s principally a three-hander, or rather a brace of intercut two-handers. Our framing story sees Nathan (Adam Dillon) - battered, bruised and handcuffed – questioned in a police interview room by Detective Miller (Nicholas Vince: Hellraiser, The Day After Dark). A sequence of flashbacks visualise Nathan’s responses and show how he formed first a friendship and later a romantic/sexual relationship with his neighbour Isabelle (Becca Talulah, who was a cheerleader in Legacy of Thorn).

Nathan is the young man who worked alongside Eleanor James' Red in Slasher House (which means that my assumption that this would be about the third psycho, the one who isn't Cleaver or Thorn, was wrong - sorry). He is agoraphobic and hasn’t left his flat in two years, ordering all his supplies online. His life is repetitive and small, his only pastime (apparently) being the creation of slightly creepy dolls. Isabelle, on the rebound from an abusive relationship, moves in across the hall. She’s attracted to the shy, reclusive guy opposite, especially when he stands up to her angry ex (Joe Hughes, a barman in Cleaver). 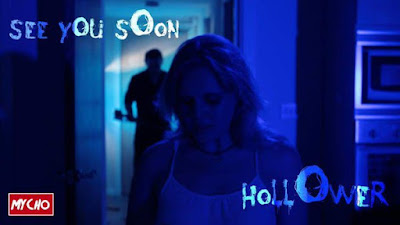 Slowly, very slowly, Nathan starts to engage with Isabelle, gradually making progress in dealing with his own mental health problems. It’s a sweet, romantic tale laced with occasional moments of delightful humour (his attempts to cross the hall to leave a present outside her door are a hoot) and scored with a variety of faux-sixties pop songs.

But always we cut back to the interview room and Detective Miller. We don’t know what it is that Nathan has done (or at least, is accused of doing) but it’s probably not good. And it probably involves Isabelle.

Dixon employs his trademark colour schemes, albeit with less startling tones, to emphasise the contrast between the two stories. The interview room is a chilly blue while Nathan’s flat is a mix of orange and reds. It may just be my old, rheumy eyesight but I got the impression that the flat eased gradually towards more natural shades as the Nathan-Isabelle relationship progressed. Apart from the hall and a couple of scenes right at the end, these are the only two locations. 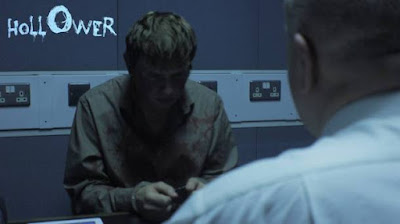 As the story progresses – at 90 minutes this is the longest MCU movie yet but it doesn’t feel stretched – we start to get clues about what this terrible crime might be. Nathan says he can’t remember anything, and Detective Miller doesn’t go into detail. But it’s in the flashback scenes that we start to get our first hints. Unremarked, in the background, just occasionally, we can spot something significant, something disturbing.

To say more would be unfair and spoiler-ish. I will note that, like the other Slasher House prequels, this works as a stand-alone horror film and you don’t need to have seen any of the others. Frankly it’s more than three years since I watched Slasher House and my knowledge of it relies almost entirely on the review I wrote at the time. (I’ve watched and reviewed a lot of films since then…) 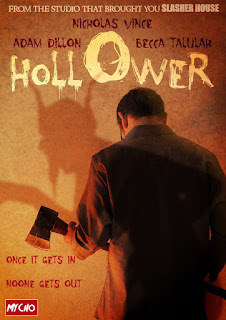 Stylish, spooky, slick and seriously disturbing in its finale, Hollower is an accomplished piece of film-making that shifts the Mycho team of MJ Dixon and Anna McCarthy up a gear. Still to come from Mycho are Slasher House II, Mask of Thorn and Return of the Killer Clown, plus who knows what other delights. You don’t have to watch every entry in the Mycho Cinematic Universe – but I’m glad that so far I’ve been able to enjoy them all.