In April 2006 I had a great time hanging out with Mike Regan, Mitch Coughlin and Blake Bolger on the set of Pumpkinhead III. I remember Mike saying, “Come and hang out in the make-up effects trailer - it’s the coolest place to be.” And it was. A couple of months later I did a phone interview with Mike. 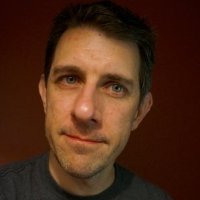 Did you, Mitch and Blake volunteer for this or did you get assigned to go out to Romania?
"A little bit of both. All three of us were on the build at Gary Tunnicliffe’s shop. We’ve all worked for Gary before and we’ve all been out to Romania before. I was in mainly because I did the mechanics. Having worked for Gary before, he chose me because I could repair and I’d been out here before so he trusts me. I’ve worked for him for ten years. Mitch, same thing: he’s been working for Gary a long time and done a couple of projects in Romania. And Blake, just being an extra hand and being someone he could rely on who had been out here before. So those were kind of the criteria: people he was comfortable sending out here to take care of this."

Howe long were you out there for?
"I think Mitch was there a week longer than us but it’s been about two months. We flew out on 11th March, this is the end of May and we’re flying back tomorrow. Mitch was out the week before us so about ten weeks."

Let’s talk a bit about the suit. How heavy is it?
"That’s always kind of a tricky one because it’s different pieces. If you’re talking about the suit, the stilt variety, the stilts themselves are pretty heavy but it was made that way. You can’t really walk in them, they were bolted down long legs. Then the normal, walking around version, you have a foam suit and the head. I think the head is maybe six to eight pounds and the suit itself is about the same, maybe ten. It’s kind of hard to tell, the way it’s spread out over your body. The mechanical head is the heavy part. The stunt head’s not too heavy because there’s really nothing in it." 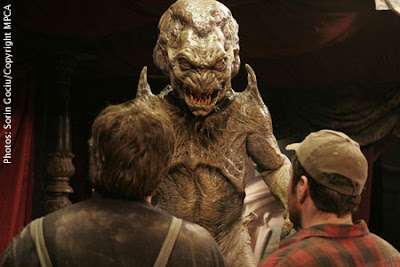 Are there several complete suits or do you just mix and match pieces?
"It’s kind of two complete suits. Basically we knew, this time around, that Romania wasn’t really going to give us the option of wire work for walking. The suit was built as one suit that’s a head-to-toe thing with the leg extensions and everything. There’s the option to have one leg free. You can take one step at the start of a walk. Then there’s a second suit that is right down to the performer’s feet and then basically you walk on a two-foot high platform that simulates the height of the legs. That allows you to frame the performer from his ankles to the top of the head. Of those two configurations, the hands could be swapped from one to the other, the head obviously could be swapped back and forth. It’s basically all overlapping pieces. There’s legs, a torso that fits from crotch to shoulders, hands that cover the arms - and a head. So two suits that are different configurations."

Is Pumpkinhead actually in the films much? How much use did the suits get?
"It was pretty active. I think the shoots were 25 days each or something. I know on Jake West’s film we pretty much shot every day with maybe just a day here or there off. And I think on Mike Hurst’s film Mike had a different shooting style and he tended to backload a lot of Pumpkinhead shots. There would be days when all we did was Pumpkinhead stuff and I think we had about a week off towards the end. That was to allow them time to shoot a lot of the dialogue stuff before doing the finale which was out in the rain so they wanted that to be the very last day, in case the suit was damaged." 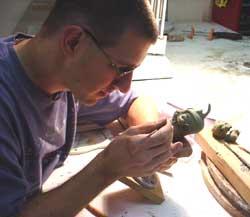 Has the suit been knocked about a lot?
"It’s taken some damage but it’s survived enough. We have to take it back to LA and scan it. I think the CG guy Stephen is slated for about ten shots in each film of the CG Pumpkinhead, which will take care of things like emerging from a burning church, some walking shots or climbing up onto the roof. Things like that, we just couldn’t do in a suit. To the CG guy’s credit, I talked with him a lot about physical stuff and he’s in favour of using physical as much as possible or augmenting physical with digital. I asked him about how they do the digital and he said the model is basically going to be built the way we would do a suit. It’s going to be scanned from the suit so his hope is that, being based on the suit it should pretty much look like the suit. Hopefully you won’t be able to tell the difference." [You can. You really can. - MJS[

How do you actually go about shipping something like that from the USA to Romania and back? Any problems with customs?
"No, not really. A lot of the suit pieces were shipped out in crates, along with the other artefacts and supplies we needed. We took a couple of pieces with us but usually when they run them through X-ray machines it doesn’t show up because it’s foam. Occasionally they’ll ask us to open stuff, like the head could look weird because of all the wires in it. But you’d be surprised, usually when you open up stuff in an airport, people are kind of interested: ‘That’s cool. What’s that?’ It’s always fun." 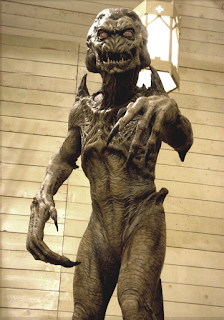 Apart from Pumpkinhead himself, what other effects have you had to do?
"In both films we’ve done the new version of Haggis, the witch who resurrects Pumpkinhead. Obviously lots of blood and guts and killing. We did some transformation stuff for Lance Henriksen because in one of the films the idea is that, because he was the last one to summon Pumpkinhead then his remains are obviously used to bring it back to life. There’s an intermediate stage where it appears as Lance and then goes from there into Pumpkinhead. So we did transformation pieces for that. There’s a beheading, lots of things getting squashed."

How long did Haggis’ make-up take to apply?
"The very first application was three and a half to four hours and towards the end it was down to about three. It’s a three-piece make-up and then a hairpiece."

When I was out there you were burying skeletons in mud, which looked like the least glamorous thing you could do on a film set.
"Pretty much, yes. They always say that it never rains in June here and it seems that whenever we’re here in June it just won’t stop raining. We’ve had lots of wallowing around in mud that we really didn’t plan on doing. This morning, to celebrate the end of filming, I actually threw away the pair of shoes that I wore: they are just beyond repair. But burying skeletons in mud is part of the plotline in III. The doctor of the town, in order to subsidise his free medical care to the community, he’s harvesting organs and stuff from people in the town that die rather than giving them proper burials. Obviously, when a family member discovers this they decide to call up Pumpkinhead because they don’t realise it’s the doctor, they think it’s this family which owns the mortuary. They decide to get revenge for the improper treatment of their kin. 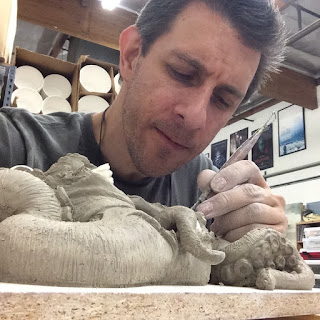 "The skeletons in the bog are the remains of the people; the furnace hasn’t worked so they bury them in the bog. So yes, my glamorous task was to hunker down and make it look like they’ve been buried there for a while. The problem was actually pulling them back out and cleaning them off. The worst part of it wasn’t even that. We had an actor on it who basically is submerged in it, to represent them disposing of bodies. They submerge him in it - and I can tell you, that actor was coughing up real bog water that got up his nose and into other places where you wouldn’t want water."

Did Jake and Mike both work well with you guys?
"They both have very different shooting styles. Mike tends to be very fast and have a very clear train of thought and vision. Jake tends to be a bit more artistic and sometimes it was tough to know exactly what he wanted until he was there and had seen something. I think maybe the short schedule hampered his style. He would have a grand vision of something and have to cut back to get it done in the time he had. But I saw a cut trailer for it and it looks fun so it will be interesting to see how they both turn out. I’m hoping they’ll be a lot of fun.”
Posted by MJ Simpson at 18:27