In June 2006, two years after our first interview, Robert Pratten sent me some photos of preparations for his second film, MindFlesh (adapted from the Buddhist horror novel White Light by William Scheinman). He also kindly answered some e-mail questions about the project. 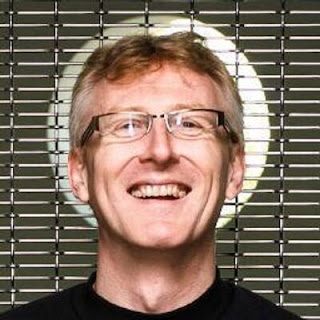 What made you want to film this book and have closely have you followed it? (Presumably you have moved the story from San Francisco to London...)
“I met Bill (the author) in Phoenix at the World Horror Convention in 2004. I read a couple of his short stories and they were brilliant. I asked for more and liked them and when Bill told me he was working on a novel I said I wanted to be the first to read it! So, around November or December 2004 when I got Bill’s novel White Light, I just couldn't put it down and I called him to option it straight away. Since then I've been working on the adaptation to the screen, moving the story from San Fran to London  - which was easy - and translating the characters' thinking and internal dialogue to visual images and actions - which was hard!

“Then, at Cannes 2005, a producer and I pitched the project to Thai production companies to get the film made out in Bangkok. We struck lucky and on July 7th, while the bombs were going off in London, I was in Bangkok discussing how we were going to shoot the film there - having rewritten the script and set it in Thailand. By November 2005 it became clear that, although we had half the money from Thailand, the other half from the US wasn't going to come through and I decided I would shoot in London again! So it's been a long process but I have to say quite an enjoyable and exciting one.”

What exactly is ‘Buddhist horror’?
“Well, I could say ‘anything horrific written by a Buddhist’ which sounds like I'm being a smartarse but I mean it's a horror film or novel by someone with a different world view - a Buddhist point of view. There are various Buddhist views expressed in the film but I guess the key one is the idea that our minds create our own reality and that a single thought can change our environment. Bill is actually a bona fide practising Buddhist who, among other things, teaches meditation to prisoners in San Francisco. I'd like to be a Buddhist but I'm just not disciplined enough!”

What cast/crew names can you give me at this stage?
”The lead male role hasn't been cast yet but we do have our goddess - a French actress called Carole Derrien - and Chris Fairbank (Alien3, The Bunker) will play a character called Verdain who's a rather nasty parapsychologist. On the crew side, I'm delighted to have Patrick Jackson (London Voodoo) on cinematography, Arban Severin (Steven Severin's missus) composing and, of course, Sangeet Prabhaker as our prosthetics wizard!” 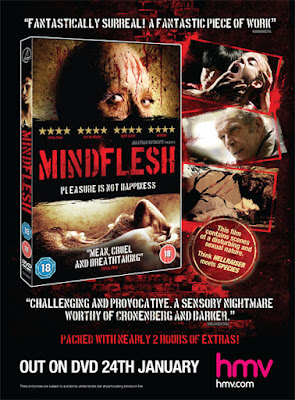 With the monster, why have you gone for a good old-fashioned suit instead of the CGI that one might expect?
“However much money you spend on CGI, the monsters still look like CGI monsters. With prosthetics I can get a monster that better integrates with the photography but also with the action. Inside the suit is an actress called Charlotte Milchard who is absolutely fantastic. It's still early stages - there's about another three weeks of work on the suit - but Sangeet and his team (Satinder Chumber, Andy Fordham and James Adams) have crafted a work of art. It's been very rewarding discussing the character and backstory of the creature and seeing how Sangeet has interpreted that into his sculpture.”

What did you learn from London Voodoo that you are able to apply to this project?
“Well, everything really - none of that experience is lost. What's different about MindFlesh is that it's very effects heavy including stuff shot against green screen so technically that's interesting and challenging in equal measure.”

When do you expect to start shooting and when might we expect to see the finished film?
“First day of photography is October 2nd 2006 but I'm aiming for a January 2008 release date. It'll take about a year in post-production - probably about six months just rendering the effects!”


Behind the scene on Mindflesh