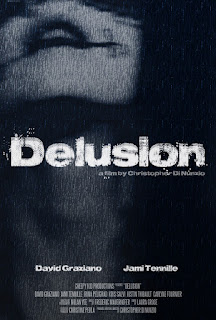 Delusion is a laudably enigmatic and ambiguous ghost story. Slow-moving and gentle for the most part, it eventually reaches a bloodily brutal climax but without any sudden shift or jump. I quite enjoyed it.

David Graziano is terrific as Frank, a middle-aged bloke whose wife Isabelle died three years ago. He has her ashes in an urn but we’re never told how she died. As the film kicks off he has received a letter from Isabelle that has somehow taken three years to reach him. This gives Frank a sense of closure which has been missing up to that point and he finds himself able to look for a new relationship.

A mysterious figure in a suit and red tie, who has something of the demonic about him, seems to be following Frank, who starts having bad dreams. He begins a relationship with a younger, very forward woman named Mary (Jami Tennille: American Poltergeist, House of Shadows) but there’s something not quite right about her. Frank goes to see a local psychic who reads some tarot cards and is concerned by what they foretell. 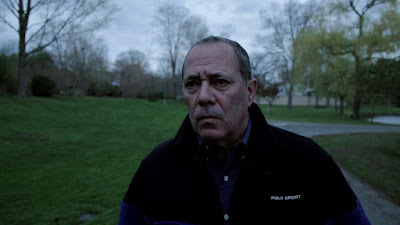 There’s a sense of magical realism to all this, a feeling bolstered by some Mexican-style ‘Day of the Dead’ facepaint. But what gives me pause, and makes the film work, is that we know Frank is taking some sort of medication. Meds which he loses, then finds, then throws away.

Without those pills, this is a fairly straightforward romantic ghost story, with Isabelle (Carolyne Fournier: The Last Halloween) watching over Frank from beyond the grave and Mary as some sort of succubus. But when we consider Frank’s medication, the story shifts so that it straddles the line between the occult and mental illness. Is Mary really a demonic entity? Or just a woman onto whom Frank’s psyche is projecting ideas and (mis)perception? Is she real at all? How corporeal, if at all, is Isabelle’s ghost? How imaginary is she? What about the sharp-suited guy? Is he real, or just an artefact of Frank’s broken psyche?

I always enjoy ghost stories based around supernatural/psychological ambiguity. The final violent scenes of this film can be viewed in a literal way if this is fantasy but offer much more scope for interpretation and debate if we consider that some of what we have seen hasn’t been real, in which case what is the real nature of this violence?

(To be fair, when the psychic hears actual voices that does tend to suggest a supernatural angle. But she thinks she’s psychic so of course she thinks she hears voices. That proves nothing.) 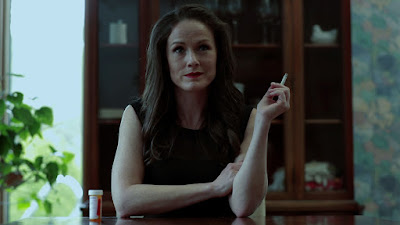 A solid cast and some good photography combine with unpretentious direction and a good script to create a fine slice of thought-provoking horror cinema that raises questions about what is on screen and follow-on questions about the nature of reality and ideas of mental health. A special note is due to Jessy Rowe who provides a lovely, characterful supporting role as a diner waitress with a passion for film noir.

Filmed around Massachusetts and Rhode Island, Delusion premiered at the Hudson Valley Film Festival in August 2016 with a VOD release two months later. Christopher Di Nunzio previously made an award-winning thriller, A Life Not to Follow and some interesting shorts (with some of the same cast and crew). 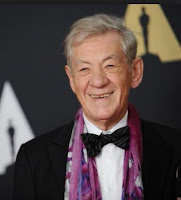 website: www.mckellen.com
Posted by MJ Simpson at 17:46 No comments: