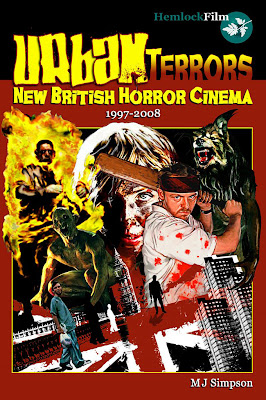 By the late 1990s, the Golden Age of British Horror Cinema was long gone. But like all the best monsters, the genre has risen from the grave and in the 21st century is going from strength to strength.

Developments in video technology and changes in distribution have seen a ten-fold increase in the number of British horror films made and released each year. From major studio pictures like 28 Days Later and Shaun of the Dead to cult indies like Freak Out and The Last Horror Movie, the new millennium is a boom time for home-grown horror. And many of these new films are contemporary, socially-relevant tales reflecting life in modern Britain; instead of creepy castles, their monsters and psychos stalk housing estates and tower blocks...

Urban Terrors: New British Horror Cinema is the first book to fully examine the British horror film revival, documenting and analysing 114 movies which were commercially released between 1997 and 2008. It reveals how changes in technology have enabled more people to make films, how changes in distribution – from VHS to DVD to VOD – are enabling more people to watch them, and how the mainstream media has failed to spot and comment upon this phenomenon. And it examines how these new kinds of horror films have dealt with issues like disenfranchised youth, class division and social exclusion...

Index of titles
Index of people