I had a chance to speak, very briefly, with Michael Praed when he was filming the thriller Dangerous Obsession (aka Darkness Falls) on the Isle of Man in 1997.

How did you get this role?
"I worked with [director] Gerry Lively on Son of Darkness, when I was a vampire with the teeth and everything, so Gerry wanted me in this. I'm also quite good mates with Oliver Tobias and Ray Winstone. My character is called Blue Eyes, which is kind of intriguing as I have hazel eyes. I appear briefly at the start and the end, so I'm only working on the film for a couple of days. This is the first time I've done a cameo role like this.”

What else have you made recently?
"I've just done a film called This Town in America. I suppose I will always be Robin Hood to some people. My first big break was The Pirates of Penzance, which was exciting for a whole range of reasons.” 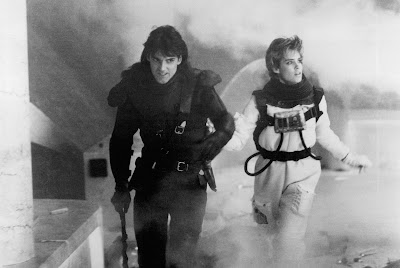 What was the story behind Nightflyers?
"Nightflyers? Oh Christ! That's an interesting story for all the wrong reasons. I liked the script, but the week before shooting, the director gave us a completely revised script. It bore no relation at all to the original! Instead of bailing out, we stuck with it. In the end, he took his name off the film - he shouldn't be allowed to get away with that.”

Do you prefer film or TV work?
"I don't mind whether I do film or TV or theatre, in Britain or America. I'll go where the work is. Acting's a tough game."