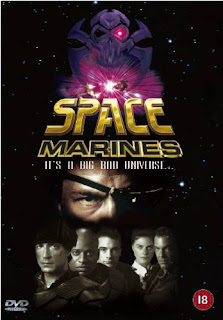 I’m sure John Pyper-Ferguson has done other stuff, but having seen this and his role as ‘Enoch Sean’ in the risible Osiris Chronicles, I can now only see him as an intergalactic pantomime villain. In Space Marines he is a space pirate (and embittered ex-marine) named Colonel Fraser. With his little Van Dyke beard, twirlable moustache ends, flouncy long hair and debonair dress sense, plus an impish delight in making poetic threats, he comes across as a cross between Lord Flashheart and Doctor Evil.

There is also, in an extraordinarily and atypically subtle moment near the start, a shared glance between himself and an underling named Lucky (Kevin Page: RoboCop, Dark Angel) which clearly implies a homosexual relationship. Lucky isn’t much to look at although Fraser’s main henchman is a muscle-rippling, square-pecced Germanic behemoth named Gunther (Michael Bailey Smith) who actually sports an eye-patch. Smith played ‘Super-Freddy’ in A Nightmare on Elm Street 5, was the Thing in Roger Corman’s Fantastic Four movie, and was also in Cyborg 3, Men in Black II, Monster Man and The Hills Have Eyes 2.

The picture opens with a space cruiser carrying some sort of secret cargo that even the blue-collar crew don’t know what it is. Gunther and his goons board the ship, steal the cargo and kidnap the VIP passenger in charge of the stuff, Vice Minister Adams (John Mansfield). The prisoner is taken back to a planet where Fraser’s compound is besieged by a squad of space marines, clad in body armour and helmets which owe a lot to Starship Troopers (released slightly after Space Marines but well into pre-production when this was made). 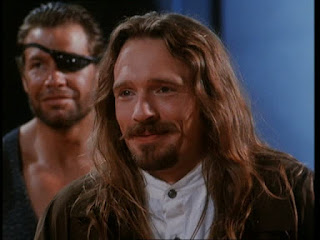 Commanded by seasoned veteran Captain Gray (Edward Albert: Galaxy of Terror, Sorceress, Mimic 2, Demon Keeper and the voice of both Daredevil and the Silver Surfer in 1990s Marvel cartoons), these include TBG Rudy (Sherman Augustus: The Young and the Restless), loquacious techie nerd Hacker (Bill Brochtup: Rockula, Ravenous), avuncular sergeant Mike (Matt Topkins, who was in several episodes of canine literacy series Wishbone, as were numerous other minor cast members), rookie Tex (Blake Boyd: Dune Warriors, Dark Planet) and, we eventually discover, the movie’s main character Zack Delano (Billy Wirth, whose ridiculous floppy hair makes him look like a young Keanu Reeves, only with even less acting ability). There are also some unnamed, non-speaking members of the squad - in some scenes - who are very much there to make up numbers like the second row of the Walmington-on-Sea platoon. They all fly around in a spaceship piloted by a guy called Hot Rod although as he is never seen in the same shot as everyone else, it takes a while to realise that he’s meant to be in the same vehicle.

The attack is aborted on the orders of pole-up-her-arse Commodore Lasser (Meg Foster: Masters of the Universe, They Live, Stepfather II, Shrunken Heads and both Oblivion movies) aboard the battle-spaceship USS Missouri, whose demeanour and hairstyle show that she is channelling Captain Janeway from Star Trek: Voyager. Before the marines retreat, Sergeant Mike takes a hit because of Tex’s inexperience, leading to bad blood within the squad, later seen bubbling to the surface during R&R in a holographic strip-joint, apparently somewhere aboard the Missouri.

The United Planets (or United Federation of Planets - it varies from scene to scene) want to try a diplomatic approach and send in Ambassador Nakamura (James Shigeta: The Questor Tapes, Die Hard, Mulan) accompanied by his diplomatic aide Dar Mullins (Cady Huffman, who guest-starred in episodes of Frasier and Mad About You). Zack is disguised as a diplomat, partly to accompany them but mostly in order to kick off a love-hate relationship with Mullins. 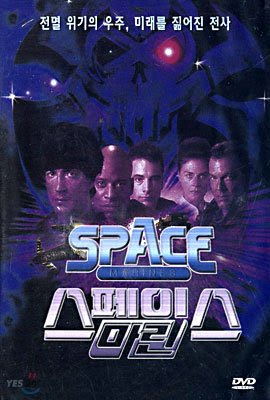 Fraser releases (then kills) the Vice-Minister and takes the other three hostage instead then piles into a spaceship and disappears through a Babylon 5-style temporary wormhole jumpgate star portal thing to an asteroid where his pirates are busy stockpiling antimatter (or something).

Gray and the other marines board the abandoned freighter from the prologue, hunting for the black box flight recorder - for some reason. Possibly my favourite moment in this uniformly silly film is when, on removal of the black box, a warning voice announces that the ship will self-destruct in two minutes and the marines spend a good thirty seconds simply standing around debating what this means. A subsequent raid on Fraser’s asteroid HQ (identified because it is the only mining operation in the sector, apparently) releases Dar and Zack amid a blaze of machine-gun fire but that rascally pirate has already escaped with man-mountain Gunther and the Ambassador, into whose body has been implanted a whole kilo of explosive antimatter.

This sequence really epitomises Space Marines and its skewed priority of action-sequences-before-sense: not only is every single person in Fraser’s HQ equipped at all times with a powerful weapon, whatever their role - and remember that this is a secret base on a lonely asteroid so they are unlikely to have many visitors - but also, despite advances in space travel way beyond the dreams of current technology, the weapon of choice for both pirates and space marines remains the M-16 automatic rifle.

Using Nakamura as a shield, Fraser and Gunther are able to make it to the home planet - and indeed the central council chamber - of the United Planets, where they demand a fortune in gold, or else they’ll detonate the bomb sewn into the Ambassador’s stomach. The Missouri follows them, refusing to answer all the (very reasonable) requests for identification and Gray’s marines, with Dar Mullins in tow, simply race through the council building, guns at the ready, and burst into what must therefore qualify as the worst guarded council chamber in the history of sci-fi politics.

Zack makes a move on Fraser but crumples to the floor because - eh? - he too has something inside him. Why this should make him crumple to the floor at this point is of less concern to the bemused viewer than how Zack Delano, having had plenty of time to shower and change since his release, nevertheless failed to notice the huge new scar on his abdomen. Eventually Tex redeems himself by shooting Fraser with a pistol but dies in the process. Somehow. 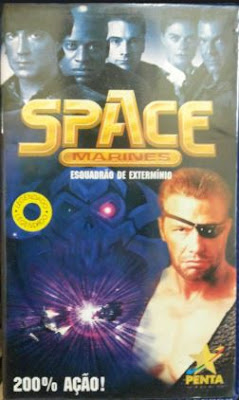 All this is presented with a po-faced seriousness (Pyper-Ferguson aside) that belies how silly and camp the whole thing is. This is an action movie without a great deal of action, a sci-fi film without any science fiction beyond a few generic trappings. So the marines are in a spaceship, so what? They could just as easily be in a lorry and it would make no difference to anything. The pirates stealing antimatter could just as easily be stealing nuclear material. The fact that they covet gold and use machine guns shows how firmly rooted in prosaic action motifs this film is, while giving only lip service to the idea of science fiction.

Space Marines is unimaginative, by the numbers, B-movie sci-fi which is only distinguishable from stuff made ten years earlier by dint of CGI spaceships rather than models. It is flatly directed from a dull script with cardboard characters. Having a leading man who doesn’t come to the fore until quite some way into the picture is a disadvantage but not as much of a disadvantage as casting the astoundingly wooden Billy Wirth (whose other genre credits include The Lost Boys, Body Snatchers, Seven Mummies and Last Lives). He gives the impression of having simply wandered onto the set, found there was a movie being made and joined in because he has an hour to kill. It’s impossible to care about him, or indeed anyone in a film where none of the characters are given any space to be themselves. As for the subplot about rookie Tex and his guilt over Sergeant Mike’s death, which looks at first like it might be important, that is completely ignored by the film (and forgotten by the audience) until the denouement.

John Weidner’s short directorial career includes two actioners - Midnight Man and Private Wars - and some TV episodes alongside more regular employment as editor on a batch of other DTV thumpers, such as Fists of Iron and Ring of Fire II. Robert Moreland’s other produced screenplays are aircraft thriller Ground Control and, in a slight change of pace, computer animated feature Happily N’ever After. However the creative ideas behind Space Marines lie with neither gentleman, but rather with the producer, Talaat Captan. 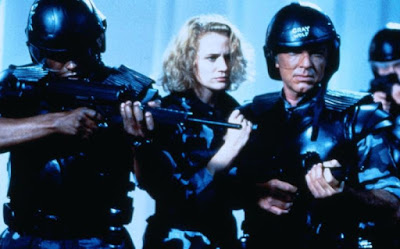 This was the last of a quartet of DTV sci-fi films produced by Captan when he founded Green Communications at the start of the 1990s, following Prototype, APEX and Digital Man. He had been working in distribution since 1983 (handling, among other things, Night Shadow, StealthHunters and kid-friendly horror anthology The Willies) and caught onto the tail-end of the DTV boom but it looks like these films were a means to an end, establishing Green Communications enough to move onto more serious fare. Oddly, he now seems to concentrate on aircraft-related thrillers; as well as the previously mentioned Ground Control he has given the world Jim Wynorski’s Crash Landing and James Becket’s Final Approach. The IMDB also credits him with a brace of hour-long, Christian musical productions in 2005. It must be the same guy, right? There can’t be two Talaat Captans.

Special make-up effects are credited to JM Logan whose sequel-heavy resume include Texas Chainsaw Massacre IV, The Dentist I and II, Children of the Corn IV, The Prophecy II, Curse of the Puppet Master, Python 2, Species IV and all three Wishmaster sequels. Visual effects supervisor David Hopkins worked on National Lampoon’s Men in White, Power Rangers Lost Galaxy and the title sequence of Reptilian, the US version of Yonggary! Another make-up effects guy, Anthony C Ferrante (Arachnid, Scarecrow) worked as unit publicist and shares credit with two other people for creating Gunther’s eyepatch.

Also in the cast are Angie Bolling (Murphy’s wife in all three RoboCop movies) as the Missouri’s navigation officer - who has one line - and TJ Myers (Time Chasers, Repligator, Bio-Tech Warrior) as a holographic pole dancer. 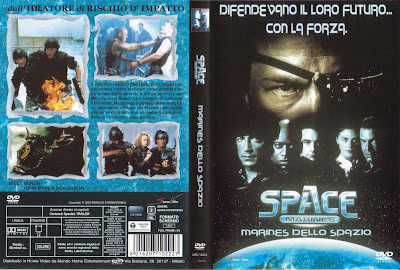 Quite why the UK release of Space Marines has been saddled with an 18 certificate is a mystery. The violence consists almost entirely of wild machine gun blasts, the sort that can take out a bad guy at a hundred yards when he’s hiding behind a barrel but which miss a good guy in plain sight at ten feet. There’s no nudity, no swearing and no drugs. Perhaps the BBFC official on duty that day was a fan of Billy Wirth and simply took exception to the fact that his name is spelled wrong on the sleeve (on the plus side, it does at least include the Token Black Guy in the cast photo).