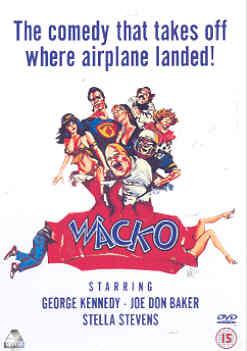 I can’t explain it, I can’t even excuse it, but I find something compulsively watchable about this desperately, desperately, desperately unfunny horror spoof. It’s like a car wreck. Every joke falls so completely flat (even the one or two that, handled properly, could actually have been funny) that it is difficult to tear one’s eyes away from the screen. In many cases, they’re not even real jokes, just jokoids: something which has the shape of a joke but isn’t actually humorous. Wacko comes from the school of comedy which says it’s enough to simply make a reference to something or recreate an image from another film - you don’t actually have to spoof or lampoon it in any way or, you know, inject any wit or anything.

A prologue set thirteen years ago sees High School student Pam Graves (Claudia Lonow: Knots Landing) preparing for the Halloween Pumpkin Prom. Her date drives her to the High School car park where the two of them are brutally killed by a long-nosed. pumpkin-headed maniac armed with a petrol-powered lawnmower. This is witnessed by Pam’s little sister Mary and her friends Bambi, Rosie and Johnny, all of whom are trussed up in the back seat. 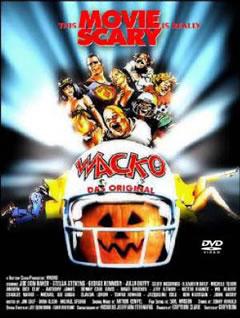 Thirteen years later, Mary (Julia Duffy: Battle Beyond the Stars, Charlotte’s Web 2) is about to attend her own Halloween Pumpkin Prom at Alfred Hitchcock High School, where her date is a young man named Norman Bates (Scott McGinnis, who was in Star Trek III and Sky Bandits and directed episodes of Angel). Yes, he’s called Norman Bates: that’s the level of satire on show here. And of course he has a dead mother whom he pretends can talk. But there’s just nothing intrinsically funny about having a character called Norman Bates unless you do something with that name, use it to make a point - or at least make a joke. But it's not a joke, just a jokoid, as is the school name. There’s even a banner up announcing that weekend’s big football game between the Hitchcock Birds and the De Palma Knives. Oh, spare me.

Mary is the only Virgin in the High School. Rosie (Michele Tobin, who must have been very young when she made her debut in an episode of The Wild, Wild West) is a glamorous pricktease dating tight-trousered Travolta-esque Tony Schlongini (notoriously unfunny comedian Andrew ‘Dice’ Clay, just credited as ‘Andrew Clay’) while Bambi is a squeaky-voiced cutie who lacks a date, played by squeaky voice artist EG Daily (credited as ‘Elizabeth Daily’).

Scuzzball detective Dick Harbinger (Joe Don Baker: Leonard Part VI, Cape Fear remake, Mars Attacks! and three Bond films) is convinced that the Lawnmower Killer will strike again, but he has so many suspects to choose from. There’s the hilariously named Harry Palms (Jeff Altman: Highlander II), evangelical Vice Principal of the school who punishes wayward students who indulge in ‘vice’ (get it?) by squeezing their heads in a large vice (get it!!!). There’s a bald escapee from a mental hospital, tastefully credited as ‘The Looney’ (David Drucker). There’s geeky loner school gardener Zeke (Anthony James: Return from Witch Mountain, Howling IV, Mortuary Academy) and science teacher Dr Moreau (Victor Brandt: Neon Maniacs, Sliver, The Cat in the Hat and two episodes of classic Trek) who injects the school football team with a chemical that turns them into beastmen, giving them their first victory in years (something we don’t actually see, presumably because it would cost too much to stage a whole ball game). 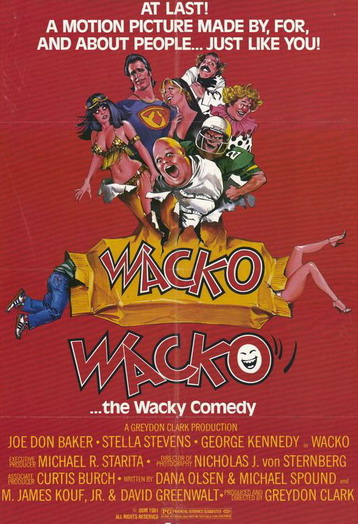 Back at Mary’s house, there’s her father, Dr Graves (George Kennedy: The Naked Gun, Monster Makers, Demonwarp, Death Ship) whose sub-Benny Hill lustings for young women are rendered distinctly dodgy by the fact that said young women are his teenage daughters. When caught in the act of spying he always claims to be “mowing the lawn”. Stella Stevens (The Nutty Professor, Invisible Mom - ah sod it, you all know who Stella Stevens is) plays Mary’s mother and Michael Lee Gogin (Critters, Munchies, Spy Hard, Fear and Loathing in Las Vegas) is her weirdo younger brother Damien who, with typical lack of subtlety, has three sixes on his forehead. There is also a strange bloke, credited as ‘The Weirdo’ (Sonny Davis), who keeps trying to catch Harbinger’s attention.

The sad part is that, though they may tick every comedy stereotype box, none of these characters are actually funny. Nor does the ‘plot’ make much sense; there’s one particular scene where Rosie and Tony are in the school cafeteria and moments later they’re in the back of a car. You might say that such sloppy story construction can be excused by the fact that it’s a hot-rod car used for school driving lessons which then chases another hot-rod car across the football field before one vehicle crashes and the other flies into the sky (in the manner of Grease), but frankly it can’t.

Filmed in 1981 but not released until two years later, Wacko is one of those films that tries to be a non-stop barrage of jokes but whereas that worked with Airplane (to which the video sleeve tries to compare this crap), it doesn’t work here because none of the jokes are even slightly funny. There are tick-the-box gags spoofing The Exorcist and Alien, neither of which is worth even a smile. The whole thing is just terrible beyond belief.

I could watch Wacko over and over again (as long as there’s a gap of several years between each screening). It’s compulsively awful in a very 1980s way but not really ‘so bad it’s good’ (as the much abused cliche has it). It’s just crap frankly. But I must be achieving some sort of meta-entertainment because I’m certainly not enjoying it in any conventional sense. 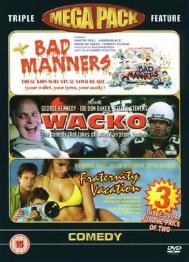 The three-way script credit is shared between Jim Kouf (The Hidden I and II, National Treasure, Rush Hour and a producer on Angel), Dana Olsen (Memoirs of an Invisible Man, George of the Jungle) and Michael Spound (presumably the actor who went on to be in The Ring, though this seems to be his only writing credit). I’m guessing that one of them wrote the script, the second inserted jokes into it and the third one had some Tippex. Greydon Clark - who is right up near the top of my interview wishlist, I don’t mind admitting - also brought us the likes of Without Warning, Dance Macabre, Dark Future and The Uninvited (which also starred George Kennedy). Cinematographer Nicolas von Sternberg is, bizarrely but not unexpectedly, the son of Josef von Sternberg. A regular Clark collaborator, his credits also include Slaughterhouse Rock, Hospital Massacre and Dr Alien.

I’ve always had a fondness for the surprisingly extensive subgenre of lawnmower horror movies (no honestly, there’s loads) and maybe that’s the reason why I enjoy Wacko despite its status as a comedy vacuum. Plus it has the deeply wonderful EG Daily (the voice of Babe in Babe, Tomy Pickles in Rugrats and Buttercup in The Powerpuff Girls), one of the very few actresses I could legitimately claim to have a crush on. Neither of those things completely explains my appreciation of this awful film, but they must be considered as mitigating factors, m’lud.