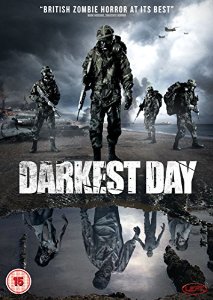 Looked at objectively, on an absolute scale, Darkest Day is a run of the mill zombie feature. Since 2000 there have been more than 80 feature-length zombie films made and released in this country (plus hundreds of others around the globe). Do we really need another?

Yes. Yes, we probably do when it’s this good and this interesting. Darkest Day is a labour of love that reflects every ounce of time and effort – and the few hundred quid – that has gone into it. Brilliantly integrated CGI effects make it look like it cost a hundred times its actual meagre budget.

There isn’t, it must be admitted, a great deal of story. Nor is there a great deal of depth to the characters. Let me qualify that: they’re not sketchily drawn stereotypes. We just don’t get to know them very well. What there is – and this matters to this reviewer at least – is a bleak, depressing atmosphere throughout the film. When I sit down to watch a zombie picture, I expect it to be stark and cheerless. Unless you’re actually making a zom-com, like Shaun of the Dead or Stalled, then an effective zombie picture needs to serve up nihilism, despair and a hopeless vision for the (non)future of the human race. That’s what I enjoy watching. 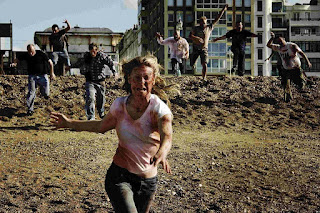 Oh, and squaddies. You’ve got to have squaddies. It’s a tradition or an old charter or something.

Writer-director Dan Rickard stars as Dan, a young man who wakes up on Brighton beach with no memory of anything, not even the recent zombie apocalypse. He is taken in – with varying degrees of warmth/caution – by a group of twentysomethings who have, for reasons that are never clear, decided to stay in their house when absolutely everyone else has been evacuated to ‘safety camps’.

I can’t say I particularly warmed to this group, who look, behave and live like students. When deadly, fast-moving, ravenous ghouls are roaming the streets, spending your evenings drinking beer and larking about doesn’t strike me as terribly sensible behaviour. I’m not actually quite sure how many people there are in the house, although in the film’s favour the ones with least character/presence are generally the ones that get killed first and the ones we get to spend time with and bother about later in the film are more clearly defined.

As for the zombies in this movie, they are very much post-28 Days Later. They are ‘infected’ rather than reanimated, and they run very fast, with little co-ordination, desperate to munch down on any living thing. And there’s a lot of them - up to 50 or so in some scenes. 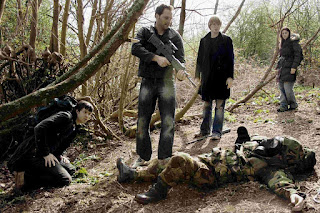 As well as avoiding the zombies, Dan and his mates have to avoid being caught by roving squads of soldiers in full camo and gas masks. While the army do seem to be on the look-out for the gang in the house, they’re really looking for Dan of course. With the film being shot and set in Brighton this put me very much in mind of Project Assassin, but since no-one’s ever seen that film and most of this lot were still at nursery when it was made, any resemblance is entirely coincidental.

There’s really not much to the story, as I say, but this is a film where you metaphorically leave the cinema whistling the post-production. An enjoyable and informative half-hour Making Of gives some insight into the film which started life as a short, then a remake of the short, then a feature, shot in fits and starts over about four years. Most of the dialogue is improvised, which is not really a problem as there’s not much narrative to drive; in fact there’s a sense that parts of the story were pretty much made up as the team went along.

Rickard has done an absolutely magnificent job of turning his locations into a deserted, broken down city. To be fair, he was starting with 21st century Brighton so was already closer to a derelict, inhospitable wasteland than he would have been in many nicer towns. Nevertheless, the visual effects here are stunning. Smashed windows, abandoned cars, rubbish and fires. All applied to footage shot on the fly, early in the morning or just in gaps between the traffic. When you think of what Danny Boyle and his crew were able to do with umpteen million quid a decade or so ago, and now what one guy can do literally in his bedroom, it's astounding. 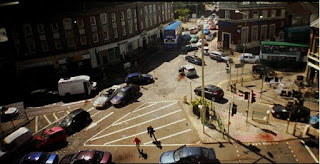 Beyond the mise-en-scene though, there’s the use of computer effects – CGI and matting – to populate the story. Rickard only had access to three army uniforms, yet there are scenes with a dozen or more squaddies, composited together from multiple takes of the same three actors (hence the gas masks!). There are military vehicles on the roads, and frequent shots of a Chinook helicopter. I was both amazed and delighted to find that some of these vehicles, including the Chinook, are not fully CGI but Airfix kits, shot against a green screen and then matted in. It’s a real joy to see practical miniature effects used – and used very effectively - in a micro-budget picture like this.

Rickard has some experience in this field as he was special effects supervisor for the Ford Brothers’ magnificent The Dead, one of the very best zombie films ever made in my humble opinion, and also its India-set sequel. He also did effects on a few shorts including Edilberto Restino’s metaphysical WW2 drama Red Letter and Andreas Ksoll’s comedy Boiler, plus cinematography on Dead Air, a sci-fi short by Darkest Day producer Simon Drake (Drake, who also appears on screen, has various low-level crew gigs on his CV including Philip Ridley’s Heartless and a brace of Mark Gatiss TV jobs, The First Men in the Moon and Crooked House.) Composer Richard ‘Wilx’ Wilkinson (who also scored Ross Shepherd’s Heathen) is also in the cast. 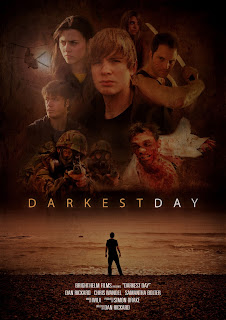 As an example of bedroom creativity above and beyond the call of duty, Darkest Day is unprecedented. Immediately after watching the Making Of, I was borderline considering whether I should award this an A+ for being so much better than it had any right to be. But on reflection, I couldn’t do that for a film that was so vague in terms of story and characters. Not emptily, disappointingly vague, but certainly not particularly gripping or compelling. Don’t get me wrong, I enjoyed Darkest Day very much. But it’s not The Dead, let’s put it that way. It’s not a powerful social statement about imperialism or racism or globalism or even about Brighton. It’s just a good zombie film. And fair play to Rickard – that’s what he set out to make. And I feel really bad for criticising the film in this way. But them’s the breaks.

Completed over several years, Darkest Day had a brief theatrical release in May 2015, playing a few venues in London and Brighton, ahead of a DVD release that same month from Left Films.