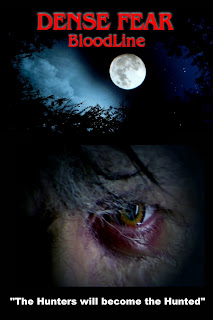 Here’s an obscure entry in the small but fascinating subgenre of British werewolf features. Dense Fear Bloodline was a labour of love, shot for peanuts over six years around Gateshead by Tony Gardner and eventually ‘released’ via YouTube. And you know what, it’s pretty damn good. I think we can all name werewolf pictures considerably worse than this.

Gardner plays (sans dialogue) Paul Johnson, a tragic lycanthrope on the run after killing his psychologist. Theatrical agent, casting director and former Byker Grove bit-parter Geoff Dunlavey is Chief Inspector Ryan of Tyneside CID, charged with tracking him down. An early scene introduces us to Detective Wendy Hale (Michelle Bayly aka Louisa Hart: Zombie Women of Satan, Mirrorvael) and there’s an absolutely wonderful chemistry between the two coppers. Ryan is bitter, weary, professional but occasionally accident-prone (a later scene with a car alarm is a corker!) and his demeanour contrasts beautifully with Hale’s joyful, teasing flirtatiousness. I was really hoping that the movie would be about these two, but sadly although Ryan has further scenes, Hale only reappears once and that’s on her own. If Dunlavey, Hart and Gardner are up for it, they should certainly consider a spin-off based around those two characters. 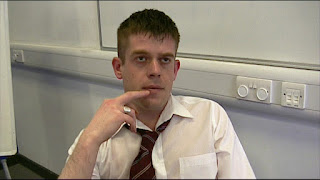 I was also impressed by the ingenuity in the production design demonstrated by this scene. Dressing up a room to realistically look like the office of a busy senior CID officer is a hefty task. Other films have failed miserably at this (Deadly Pursuit notoriously used the changing room at a boxing club!). Gardner has simply tweaked his script to explain that Ryan is in a temporary office, hence its spartan appearance. Indie film-makers take note: this is how to do it.

Sadly, we have to leave the two plods and meet our principal ensemble, a bunch of squaddies hunting Johnson in the woods, hoping to catch him before nightfall when the full moon comes out. (As so often with werewolf films, the script ignores the rather basic fact that there’s only one full moon every four weeks. So if Johnson transformed last night and ripped his psychologist’s guts out, he can’t also be transforming tonight.)

Actually I say ‘squaddies’ because these are guys in camo with guns, but they’re not regular army, rather they’re mostly ‘ex-military’ (according to introductory captions). One is now a zoologist (there’s an interesting career path!), one’s a former royal bodyguard etc. Joining them is Layla Price (Shannon Grey), a feisty, no-bullshit MI5 operative with a talent for kickboxing. She says she’s 21 but, since I’m pretty sure you need a degree to join MI5, her field experience must be pretty limited. William Bain plays the squad leader, Marcel. Also under his command are grizzled Gulf War vet Jackson (Dave Newsome); paranormal expert Roberts (Michael McDermott); bolshy Scot Ford (Alan Clennell) and animal behaviour expert Dylan (Mark Salem). 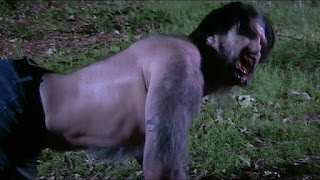 Despite the natural difficulty in distinguishing between a bunch of men all dressed in camo, there are some lovely moments of characterisation and interpersonal relationships. The combination of ‘squaddies + werewolves’ can’t help but draw comparisons with Dog Soldiers (which must have had a thousand times this film’s budget). While the script, acting and production values on show here obviously don’t approach Neil Marshall’s film, they are respectable in their own right, given the nature of the production, and bolstered by Gardner’s adroit direction and editing.

One thing that Dense Fear Bloodline has very much in its favour is the actual werewolf (characters don’t shy away from using both the W-word and the L-word). There is a transformation scene at about the halfway point which is a master class in how to handle on-screen transmogrification. There’s no CGI, no lap-dissolves, just a succession of shots of Gardner on all fours intercut with some smart physical effects and – here’s what makes the whole thing work – a great foley track of unpleasant-sounding snaps, crackles and pops as muscles, bones, sinews, tendons, flesh, nails and hair rearrange themselves in ways that nature never intended. The mightily impressive special effects were supervised by Mark Danbury whose other gigs include Bloodlust, Coulrophobia, Wire in the Blood, Zombie Women of Satan and The League of Gentlemen. 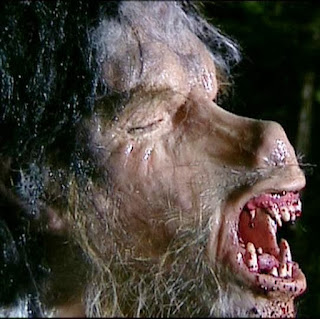 On top of which, Johnson is played for the remainder of the film by (a succession of actors in) an absolutely awesome home-made full-body werewolf suit. Shaggy fur, fearsome (movable) jaws and sharp claws exacerbate a fantastic performance of quasi-lupine body movement. Clever lighting and editing lets us get a good view of the beast while covering up any unavoidable deficiencies in the costume (such as the non-moving eyes). Pumpkinhead-style stilts in the legs raise the creature to a good seven feet tall. Low-budget UK werewolves have been poorly served over the years, from the glove puppet of Full Moon Massacre to the joke-shop fangs and fuzzy sideburns of Strippers vs Werewolves to the complete absence of lycanthropes in Lycanthropy. Gardner is a major-league werewolf fan and has constructed a terrific costume around which he has then crafted a very watchable micro-budget feature film.

Once transformed, Johnson becomes the hunter and the squaddies are the hunted, despatched with some gruesome gore effects. Watch out for the brilliantly clever but actually very simple ‘snapping the neck’ shot. In a possibly unique take on lycanthropy, victims who are severely injured but not actually killed swiftly return as second-level werewolves (with fuzzy-face’n’fangs make-up that is sensibly kept largely obscured). This requires characters to cold-bloodedly shoot injured colleagues, just as they would if the threat was zombies. Also worth noting is that Tony Gardner (who pulled additional duty as cinematographer) shot all these night-time scenes actually at night. Major kudos for that – it makes a helluva difference. 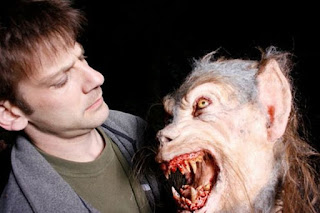 This hugely impressive five-and-change production is sometimes listed as Dense Fear II Bloodline and indeed turns out to be the sequel to a 50-minute sub-feature, Dense Fear, which Gardner shot in 2000 and finished in 2003. Certainly one doesn’t need to have seen Part 1 to understand and appreciate Part 2; there are enough references to events in the first film to get the gist of what has happened up to now. The only real mis-step is something about a hooded figure who was the original lycanthrope and now protects all werewolves (or something). This figure does turn up towards the end but it’s an unnecessary, confusing additional level of fantasy and probably could have been ditched. But it incorporates quite a groovy visual effect so, hey-ho.

The feature had a local premiere at a club in Gateshead a few days before Halloween 2012 (‘optional fancy dress’!), followed by live streaming the following night, complete with an online chatroom. Gardner then posted the whole movie onto YouTube in November. And, although I described this film at the top of the review as ‘obscure’, in less than three years that YouTube version has had more than 300,000 views (and 300+ comments). Okay, those viewers may not all have watched the entire movie from soup to nuts, but nevertheless that’s way more people than would ever see a low-budget British film in even a well-publicised theatrical release. And probably more than most micro-budget horror films manage in DVD sales. Distribution is a different world from what it was 15 years ago (ironically about the time Gardner started making the original Dense Fear).

That said, this undoubtedly is obscure because who the hell has ever heard of it? I first came across Dense Fear Bloodline when I was checking cast credits for my review of Legacy of Thorn. So far as I can tell there is not a single review anywhere online, apart from a couple of typically effusive customer reviews on the IMDB. In April 2015 Gardner updated the film’s website with a promise of “information about the DVD release very soon” so a more formal release is indeed on the way, to include a Making Of, bloopers, deleted scenes and all manner of delights. The version on YouTube, while eminently watchable, is certainly a very long way from HD, although one has to wonder to what extent that reflects (a) the budget and (b) how long ago the fellow actually shot this thing. 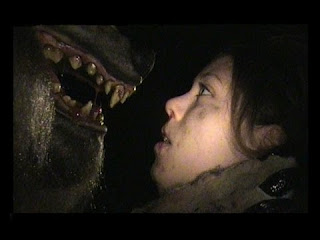 Also in the cast are Sam Hampson (Soldiers of the Damned), Simon Craig (The Last Zombi Hunter, Legacy of Thorn, Blaze of Gory) and William Scott Johnson (A Home for the Bullets, Feast for the Beast). Paul Palance gets a ‘special guest’ credit, perhaps on account of having played a drunk in one episode of Auf Wiedersehen, Pet, which probably marks him out as minor royalty in Tyneside.

I take my hat off to Tony Gardner. On a budget that wouldn’t buy a crate of Newkie Brown, he has created a genuinely enjoyable and exciting feature-length werewolf movie that stands as a significant title within the British Horror Revival. It just goes to show what gems are out there when you look.