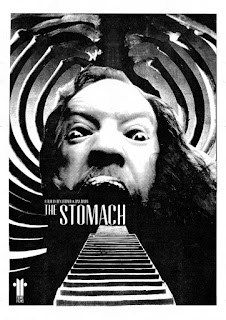 It has taken me a ridiculously long time to review this 15-minute masterpiece of British horror. But I wanted to do it justice.

The Stomach premiered at Fantastic Fest in the States in September 2014. I saw it at Fantastiq in Derby the following May. In August 2015, Ben Steiner was kind enough to send me a screener, at about the same time that the film appeared on iTunes. All this time it has been touring the genre and mainstream festivals of the world, playing well over a hundred gigs, amassing more than 20 awards and impressing all who see it. Meanwhile, a major project at the University kept me working evenings and weekends (and exhausted when I wasn’t working) so that it is only in October 2015, five months after first seeing the film, that I have been able to find the time to watch and review it.

Please understand, folks, that a quarter-hour film doesn’t take a quarter of an hour to review. And frankly, in this house, just finding a quarter of an hour of uninterrupted viewing time can be a bleeding miracle. But I’m not here to write about my home life. I’m here to write about The Stomach. To explain why it’s one of the very best British horror shorts of recent years, why it has been such a popular choice at festivals, and why you should take the trouble to watch it. 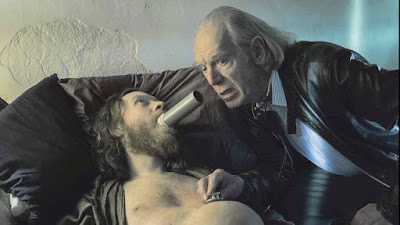 The Stomach is a beautifully original idea. Not for Steiner and his Fume Films partner Dan Dixon the standard tropes of zombies, ghosts, psychos, vampires and so on. This is a tale of mediumship gone awry, of communing with the dead. So it’s a supernatural tale, but it also ticks the ‘body horror’ box because of the unique way that brothers Tom (Ben Bishop: Whitechapel and the 1999 Doomwatch TV  movie) and Frank (Simon Meacock: Slash Hive, Pirates of the Caribbean 2, lots of TV including Poldark, Outlander and MI High) do that communing – via Frank’s torso. A customer provides an item relating to the deceased. Lying in bed, stomach bare, Frank takes this, and then puts a wide tube into his mouth. His belly distends. The customer can then commune with the deceased by speaking into the tube in Frank’s mouth while listening to his stomach through a stethoscope.

It’s a disturbing, even repugnant vision, made all the more unpleasant by the shabby bedroom in which Frank lies, straggly of beard and pale of face. You have to wonder, first, what sort of sick mind comes up with a cinematic idea like this, and second, how Frank and Tom discovered this ability…

Tom, dressed like a seedy working men’s club compere in a velvet jacket that adds nothing but irony to their situation, is the organiser and the money man. The brothers are close; there’s no suggestion that Tom is ripping off or using his brother, though clearly he is the dominant partner while passive, prostrate Frank is the one suffering through these gastric séances. There is also no suggestion that anything is fake. This is genuine communion with the dead.

Most of their customers are rather sad old ladies like Mrs Bird (Jennie Lathan: Gangsters, Guns and Zombies, The House of Silence) who visits regularly to chat with her late friend. The problem arises with the arrival of Mr Pope (Peter Marinker: The Martian Chronicles, Nightbreed, Judge Dredd, Event Horizon and numerous voice dubs including Ben in Star Fleet!), an unsavoury, criminal character looking to contact his younger brother. There is more to Pope than meets the eye. 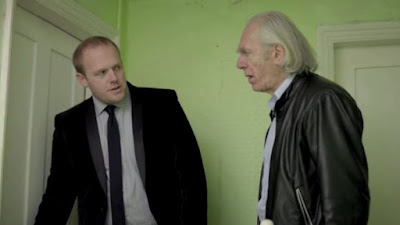 To say more would be to spoil a film which is at once startling, revolting, fascinating and thought-provoking. Steiner’s script is a fine, self-contained slice of horror which tells us everything we need to know about these people and this world. He has then directed the story with an eye for detail - the fish tank, the coughed-up blood – that makes this more reality than metaphor. What I really, really loved about this film – even above the script, the direction, the superb sound design (by the enigmatically named ‘Z No’)  and the terrific acting by all concerned – is Nicola Wake’s production design.

The combination of Wake’s design with Dominic Bartels’ cracking cinematography creates a seedy, working class, very British world. It’s not the stereotypical world of geezer gangsters (despite Pope’s dodgy motivation) but instead it’s the world of kitchen sink drama, more A Taste of Honey than A Day of Violence. It’s a prosaic (under)world of old bed-linen and peeling paint. This is exactly the sort of horror-meets-social-realism film which exemplifies the strengths and distinctiveness of the British Horror Revival.

Britishness is also key. It’s hard to think of any other country where this would work in the same way. Maybe Germany or Scandinavia, but that would be a different film. This is probably unintentional but it occurred to me that, in combining spiritualism with crime, The Stomach harks back to one of the forgotten bedrocks of British horror cinema. That’s At the Villa Rose, the AEW Mason novel which was written in 1910 and filmed (with extraordinary regularity) in 1920, 1930 and 1940. What goes around comes around.

The fine cast is rounded out by Kiki Kendrick (Grave Tales) and Neil Newbon, whose pop culture immortality is guaranteed by having played the waiter in the original Goodness Gracious Me ‘Going Out for an English’ sketch! Editing is jointly credited to producer Dixon and Jacob Proctor (The Borderlands, The Scar Crow, um, MasterChef). Jon Revell (Belly of the Bulldog, The Forgotten, Scintilla) designed the costumes; Dicken Marshall composed the effective music; Jodi Cope designed the make-up. The prosthetic effects on which the whole story rests were supplied by Dan Martin (Sightseers, In Fear, The Sleeping Room, The Devil’s Chair, Salvage, F, Isle of Dogs, Little Deaths, The Devil’s Business, Nina Forever, Ibiza Undead…) and damn good they are too. 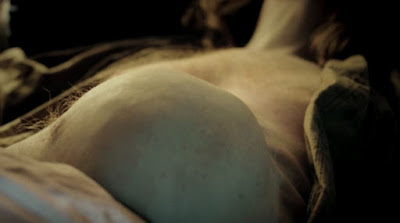 Steiner and Dixon’s previous short was The Flea, an eight-minute vampire film which played Frightfest in 2008 and is now available on YouTube. Before that. Steiner made one segment of 2008 half-hour mini-anthology HorrorShow. Both of those also starred Meakin. Dixon’s day-job in visual effects has garnered him credits on a number of blockbusters including Pirates of the Caribbean 4, Godzilla and Avengers: Age of Ultron. The pair are now developing a slate of four Fume Films features including an expanded version of The Stomach.

Wasting neither a second of screen-time nor a pixel of screen, The Stomach is a little slice of horror perfection. A film you must see and, having seen, will not easily forget and will want to see again.