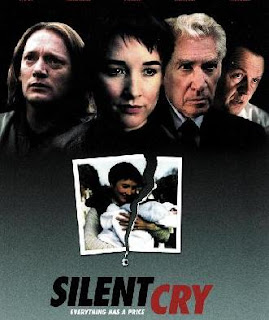 Silent Cry is the 'lost' Julian Richards film. Shot in 2002, it remains unreleased outside Germany (not the first British film to find itself in this situation - see Project Assassin) although it did receive a belated UK premiere at the National Museum of Photography Film and Television in 2004.

Strictly 'work for hire', Silent Cry falls chronologically inbetween Darklands and The Last Horror Movie. While it certainly doesn't have the innovation and cult appeal of the latter, it shares certain stylistic/thematic traits with the former, notably an urban conspiracy based on corruption at the highest level and a protagonist whose accidental involvement in the situation proves to be anything but. I thoroughly enjoyed Darklands, being able to see past Craig Fairbrass' astoundingly wooden performance, but I'm aware that some other folk were less enamoured of Julian's debut feature. So I'm loathe to suggest whether or not Silent Cry is better than The Wicker Man Comes to Newport; I can however confirm that it does not have Craig Fairbrass in it which should be recommendation enough. 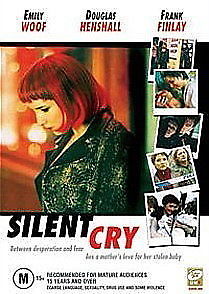 Emily Woof (also in the unjustifiably obscure Pandaemonium) is terrific as single mother Rachel Stewart whose baby dies only a few hours after he is born. But through her distress, Rachel realises that when she visited the baby in the hospital nursery on that first night - when he seemed to be perfectly healthy - she saw consultant Dr Richard Herd (Kevin Whately: Inspector Morse, Auf Wiedersehen Pet) up to something; he seemed to be switching ID tags on two babies. Was one of them hers? I may be reading too much into this but the sense that something was seen but not really registered brings to mind Argento movies such as The Bird with the Crystal Plumage.

Returning to the hospital, Rachel finds herself stalked by menacing, six-foot Police Detective Betts (Clive Russell: Neverwhere, King Arthur) and in escaping she unwittingly involves hospital cleaner Daniel Stone (Douglas Henshall: If Only..., Kull the Conqueror) in the situation. In short order, Rachel's world falls apart through the Terminator-like determination of the ruthless Betts. All she has to go on is the name of the mother of the other baby, ‘Joanne Dreyer’.

Rachel and Daniel's desperate search for the missing baby takes them into the seedy depths of London's nightlife, pursued at every turn by Betts who will stop at nothing - including cold-blooded murder - to silence them. Fortunately Daniel has friends in low places who provide unexpected help, including one scene where Betts is forced to back down which seems to owe a little to the old Amicus movie Tales from the Crypt.

Also in the cast are Frank Finlay (Ghosthunter, the 1977 TV Dracula) as Rachel's family doctor, Craig Kelly (Beyond Bedlam, Queer as Folk) as a colleague of Betts, Stephanie Buttle (Urban Ghost Story) and Richard Lumsden (from sitcom Is It Legal?) as Rachel's friends and Steve Sweeney (Lock, Stock and Two Smoking Barrels) as a friend of Daniel's. 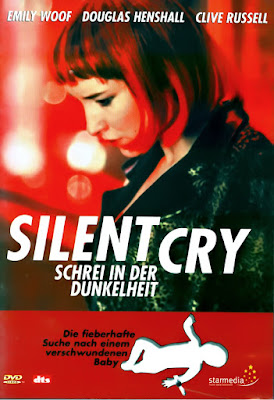 Silent Cry is a cracking little thriller, very tense and - in its third act - shockingly brutal. Julian Richards' direction is confident and effective. The biggest criticism one can make is that Simon Lubert’s script does depend on a maternity unit following practises that British hospitals haven’t used for some years now, such as keeping new-born babies apart from their mothers in a nursery, and other hospital-related aspects - such as easy access to a maternity unit - are pure fantasy. Evidently Lubert’s initial idea for the script came several years ago when this sort of thing could still happen.

Christ alone knows why this gripping, very watchable picture hasn't been able to find a UK release on either big or small screen, considering the rubbish that does make it into distribution.

Email ThisBlogThis!Share to TwitterShare to FacebookShare to Pinterest
Labels: 2002, UK