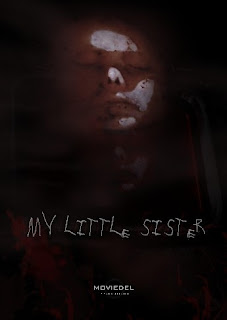 This is the third feature from the del Piccolo brothers who previously brought us the British The Hounds and the Anglo-Italian Evil Souls. This one is solely Italian although the dialogue is all in English (with a variety of accents).

As such, we can count this as part of the Italian Horror Revival, a reinvention of traditional cinematic conventions as groundbreaking – and as consistently ignored – as the more familiar (to readers of this site) British Horror Revival. Just as 21st century British horror film-makers have reacted against the gothic tradition, refusing to slavishly copy creaky old Hammer tropes, themes and imagery, so too have their Italian counterparts marked out new territory, unbeholden to the works of Argento, Bava et al.

To put it simply, we don’t need any new Argento films because we already have the old Argento films, just like we don’t need any new Hammer films because we already have all the old Hammer films. And yet vast amounts of print and pixels are devoted to each new feature from Dario (with Alan Jones inevitably touting it as a return to form, apparently assuming people will forget he said the same thing about the previous flops…) just like the press fell over themselves to lavish attention and praise on The Woman in Black, hailing it as some sort of rebirth of British horror cinema when it was actually an anachronistic throwback artificially bolstered with a stuntcast leading man.

To put it even more simply: film-makers in Italy are making terrific movies that you’ve never heard of, just like film-makers over here are. Principal among these are of course the films of my pal Ivan Zuccon but he’s absolutely not a lone voice. There are a lot of horror movies being made in Italy right now, many of which have little or no impact outside of their home territory. You have to search for these things.

The Brothers del Piccolo certainly have an advantage over many of their compatriots in how their British connections increase their visibility on the global horror stage. I’ve still not seen The Hounds but I enjoyed Evil Souls and I enjoyed My Little Sister also. Here’s why.

Truth be told, there’s not a great deal of story in this taut, 75-minute slasher. There’s not exactly a huge amount of characterisation and really very little dialogue indeed (even if your definition of dialogue includes screams). What you will find here is lashings of tension, some real horror and a refreshing attitude towards the clichés that bedevil so many similar films.

One image in particular stands out. You may remember (or you may not; on the balance of probability the latter is more likely) that in my review of The Other Side of the Door I bemoaned the tendency of horror film soundtracks to emphasise spooky imagery with music stings. As a monster scuttles across the corridor in the background, a massive chord always seems to crash onto the soundtrack, ostensibly underlining the horror but actually robbing the imagery of its intended effect. Well, there is a shot in My Little Sister, inside a tent, in which we see an unidentified silhouette, carrying an axe, cross the rear canvas. It’s only brief, the characters don’t notice it and thankfully neither does the composer. And the very absence of any sort of musical recognition makes it much, much more frightening than it would be if there was an accompanying orchestral “D’naaaaa!” Horror movie soundtracks: less is more, folks. Less. Is. More.

So: a young couple go camping in the woods. They are expecting to meet three friends in the selected clearing but, though the tents are there, the folks are not. A creepy guy with an axe warns them to pack and leave because of a local (male) psycho named ‘Little Sister’ but they dismiss his concerns. They have also spotted (and laughed at) a mad woman with bandaged wrists wandering around the forest.

Those three friends, we may reasonably surmise, were the three folks whom we saw tortured by a nutter in the prologue. He wears a padded anorak and a mask made of human skin and likes to peel people’s faces off. His name is Igor, and he is our protagonist.

Well, before too long, Igor/Little Sister has the boyfriend trussed up, ready for a face-slicing. The middle act is a very well handled game of cat and mouse as the girlfriend creeps around Igor’s house and outbuildings, trying to avoid him while staying close enough that she might be able to effect a rescue. 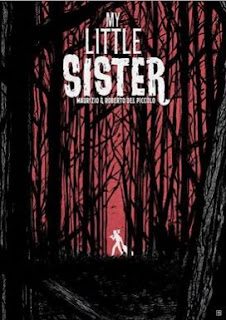 Igor’s back-story is revealed in some convenient home movies which are being watched by a silent figure in a wheelchair. Over the course of the film we gradually learn more about Igor’s family and background, without any need for dialogue or explanation. The whole thing culminates in one of his victims taking a gamble on doing something utterly horrific in an attempt to trick Igor, taking advantage of his diminished mental faculties. It’s an audacious move for both character and film-makers which helps, along with other clever twists, to distinguish this from the many generic rent-a-slasher features out there.

The solid cast includes David White (Apocalypse Z, Zombie Massacre 2) and Holli Dillon (who was in Evil Souls and Steve Look’s 2011 zombie short Night of the Loving Dead). The brothers’ regular DP Tommaso Borgstrom does his usual fine work. The make-up effects are by someone named Chiara MechanicDoll!

My Little Sister is a superior slasher and a fine addition to the brothers' steadily building body of work, as well as to the Italian Horror Revival. If your idea of Italian horror is some creaky old giallo from the 1970s, here is a chance to see what modern spaghetti nightmares are really like.

No distribution has been announced yet.