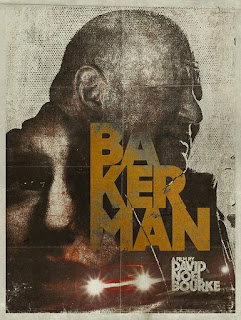 Some film-makers pump out their movies like there’s no tomorrow: two, three or more every year. And there’s nothing intrinsically wrong with that. Danish film-maker David Noel Bourke is more of an artisan. There was a six-year gap between his first two films, Last Exit and No Right Turn. Seven years further on, here comes his third movie, Bakerman.

It’s a drama with thriller elements. It’s not as bleak as the Scandinavian drama you see on TV, but it’s not a comedy. Serious but not grim. It’s very good. Not obviously commercial, but good and definitely worth watching if you like a movie that makes you think.

Mikkel Vadsholt is Jens, a middle-aged, overweight, balding man who lives alone in a cottage in the woods and works in a small bakery in the city. Once a week he referees amateur football. He occasionally goes out drinking with his younger colleague Brian (Brian Hjulman) who is a bit racist, a bit sexist and not unsuccessful with the ladies. Jens’ sister Anna (Mia Lerdam) runs a bicycle shop – very Danish that – although (unless I missed something) we only find out about halfway through that she’s his sister. 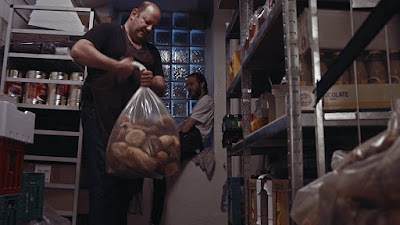 One day, Jens finds his car vandalised. When it happens again, he confronts three cocky youths who were fairly obviously responsible. Two walk away, sneering. The third stays and Jens, who’s quite a big fellow, despite his beer-gut, kills the guy with a tyre-iron.

Emboldened, and having taken the youth’s phone, he tracks down one of the others and kills him too. By now, Jens has something of a purpose in his life: he’s a vigilante. When he sees a man attacking a young woman, he punches the guy and rescues her. She is Mozan (Siir Tilif), who has neither family nor friends so ends up living with Jens in his cottage. Mozan tidies up for him; he shows her how to make bread. A friendship develops. Eventually he feels bold enough to take her to Anna’s birthday party, which may just be too much.

Apart from a couple of moments of violence, and a little tension as Brian explains how the police have been round asking questions about a local murder, there’s nothing obviously gripping here. But this is nevertheless a thought-provoking, thoroughly engaging film. And like many of the best films, it has a subtext. 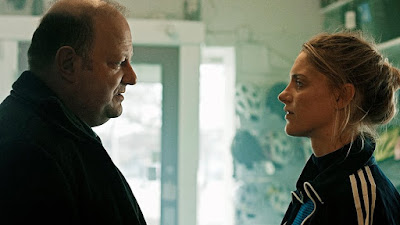 At first glance, that could be a subtext about immigration and racism. The youths are immigrants, so is Mozan. The bakery has recently been taken over by a middle-eastern guy (Pejman Khorsand-Jamal) who has reduced the quality of the ingredients, caring only about profit margins not baking skill or customer satisfaction. Jens doesn't like him and he doesn't like Jens.

But no, the underlying theme here is heroism. Bakerman is a meditation on the nature of heroes and heroism. Jens feels like a hero when he starts taking out the city’s lowlifes, and especially when he rescues Mozan. Anna calls him a hero just for giving her a lift in his car. At Anna’s fancy dress party, Jens wears a generic superhero outfit. Even the film’s title is an allusion to heroics: he’s not Superman or Batman or Iron Man or Spider-Man, he’s Bakerman, Eventually Jens realises that life’s not about being a hero, it’s just about decency, understanding and caring. We don’t need heroes, we just need decent human beings. Opening yourself up to someone and letting them into your life – and letting them let you into their life – is heroic enough.

That, at least, is what I took away from this fine motion picture. It’s a serious, thoughtful, dramatic - in places, very touching - take on an aspect of the human condition. Vadsholt is excellent in the lead role, the supporting cast are all very good too, and Bourke both writes and directs with a deft hand and an observant eye. The film is in Danish (obviously) with word-perfect English subtitles. Since Mozan doesn't speak Danish, conversations between her and Jens are in English. 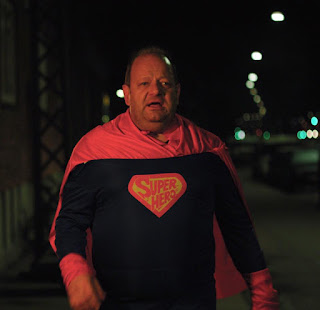 As produced, Bakerman is very different from the original concept, which was called White Pig and touted as 'Nordic noir'. Back in 2013, the synopsis for that read: "White Pig is the story of a series of grisly murders that shakes up a whole country. Told through the eyes of both the bad guy, Jens, who is the murderer and the good guy/girl, Mia, who is the police officer and how they both end up dangerously crossing each other and ultimately how they alter each others fate forever..." There are no police officers in Bakerman and the murders that Jens commits (for, like it or not, he is technically a murderer) don't shake up Denmark. It's interesting how films change during developmen. On the basis of Last Exit and No Right Turn, White Pig would probably have been a cracking 'Nordic noir' crime thriller. But I'm glad that David explored a different direction for the character and the story, creating something unique and fascinating.

David Noel Bourke movies are rare things and only come along very occasionally. But they are worth waiting for. You will enjoy and appreciate Bakerman.

Email ThisBlogThis!Share to TwitterShare to FacebookShare to Pinterest
Labels: 2016, Denmark