These box-outs accompanied the SFX article '1977: The Birth of Generation X-Wing', originally published in 1999. 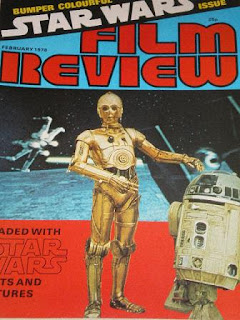 The first ever reviews of Star Wars were in two daily Hollywood trade mags on 20 May 1977, which both considered it “magnificent”. “Lucas combines excellent comedy and drama and progresses it with exciting action in tremendously effective space battles,” gushed The Hollywood Reporter, while Variety deemed it “the kind of film in which an audience, first entertained, can later walk out feeling good all over.” When the movie actually opened, the Washington Post called it “the kind of sci-fi adventure movie you dream about finding, for your own pleasure as well as your kids' pleasure” while the New York Times lauded “the most elaborate, most expensive, most beautiful movie serial ever made.”

Time called it “the year’s best movie”; Analog thought it was “a galactic Gone With the Wind”; Box Office magazine said “few fantasies have been made with such a sense of humor”; and Films in Review commented “it offers an amusing blend of past and present, combining fairy tale with science fiction, medieval hocus-pocus with modern gadgetry” while noting that “except for one bit part, Princess Leia is the galaxy’s only female”.

Screen International admitted: “The story is so-so, with written-down dialogue which emphasises the strip cartoon nature of the characters and situations. But it is this very simplicity which is the secret ingredient in the successful formula.” Film Review summed up the whole phenomenon with: “There has never been a film like Star Wars - not for sheer fun, mindboggling spectacle and overwhelming popularity.”

Of course, a knee-jerk reaction was to be expected from some quarters. The Listener pondered: “Star Wars is great good fun and cleverly made, but what is there about it that has created this hysteria? It can only be its marriage of sci-fi knowingness with something it is hard to resist calling religious nostalgia.” A typically clinical review in the Monthly Film Bulletin said: “It could scarcely be termed science fiction at all, but… a simple space adventure, now overlaid with sterile nostalgia and multi-levelled movie puns.” Time Out employed no less a person than JG Ballard to review the film: “It is engaging, brilliantly designed, acted with real charm, full of verve and visual ingenuity,” he wrote. “It’s also totally unoriginal, feebly plotted, instantly forgettable and an acoustic nightmare.”

Film Comment offered two opposing reviews. On the one hand, Star Wars was: “an antimodern message in an ultra-modern wrapper: what could be more stylish? What could be more fun?” On the other: “The survival chances of Star Wars are slim. No matter how one looks at it, George Lucas has not only made a movie which is mindless where it would be mind-boggling, he has made a movie which is totally inept.”

“I cannot see what all the fuss is about regarding Star Wars,” said a hilarious letter in the May 1978 Film Review. “There were better space stories over 40 years ago in such publications as Boys’ Magazine, of which I have many copies.” The following month, the nation’s dullest 14-year-old wrote to say: “I just don’t know how adults can sit and watch Star Wars. I went to see it and I thought it was a very boring film.” But first prize for missing the point must go to Take One magazine which mentioned “the disastrous casting” and “the bad acting” before concluding: “There is no sense of wonder or magic in the film.” 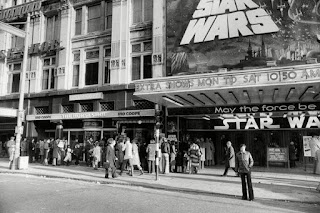 The first place outside the United States to see Star Wars, in late June 1977, was (somewhat bizarrely) the Philippines, and by the time the film opened in Britain, it was also already playing in some European markets. SF lore has it that Star Wars opened in London on Boxing Day 1977, then opened nationally one week later on 2 January 1978, the same day that the first episode of Blake’s 7 was broadcast.

However, a study of trade papers from that time shows that the UK premiere was actually on 27th December. Star Wars opened on that date in two West End cinemas, the Leicester Square Theatre and the Dominion, Tottenham Court Road, where it took a record-breaking £117,690 in its first week. (The previous London opening week record-holder was Jaws, which took £90,655 at four cinemas.) Other SF films showing in London that week included: Dark Star, Demon Seed, Escape to Witch Mountain, Futureworld, The Giant Spider Invasion, Godzilla Vs the Cosmic Monster, The Island of Dr Moreau and Flesh Gordon!

Star Wars continued to play exclusively at these two cinemas for over four weeks, with police clamping down on touts who were selling the £2.20 tickets for up to 30 quid a throw. Then on 29 January it opened in twelve major cities around Britain, followed by a further 16 cinemas in Greater London the following week.

Two other science fiction debuts in Britain in January 1978 were Blake’s 7, as mentioned, and Doctor Who’s chamois-clad assistant Leela, who made her first appearance in Chris Boucher’s story 'The Face of Evil.' The first season of The New Avengers was drawing to a close on television, while the second season was already in production. Depending on your ITV region, you could also be subjected to Logan’s Run, Man from Atlantis, The Six Million Dollar Man and/or The Bionic Woman.

Meanwhile, the first radio series of The Hitch-Hiker’s Guide to the Galaxy was being recorded, and a new writer called Orson Scott Card was receiving acclaim for his debut short story, 'Ender’s Game'. Scariest of all, the BBC had broadcast an SF pilot on 13 December 1977 which convinced them that it would be worth making a whole series of Come Back Mrs Noah!
Posted by MJ Simpson at 14:08