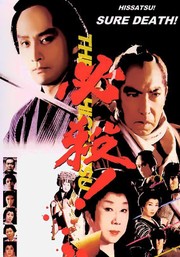 This is an enormously entertaining way to pass a couple of hours and wonderful insight into a rarely seen part of Japanese popular culture, but if I said that I could follow what was going on in any significant way, I would be a lying git.

The print used by Artsmagic has the original on-screen English title The Hissatsu. Now, Hissatsu (‘determined to kill’) was a Japanese TV series which ran for several years in the 1970s in various incarnations, and which has spawned various movies, of which this seems to be the first.

In mid-19th century Edo, a group of professional assassins find that someone else is picking off their number one by one. And, um, that is the sole extent of the plot that I was able to work out. One of the assassins has a day-job as a corrupt cop, and there is some sort of comic subplot involving his wife and mother-in-law. A famous puppeteer is also involved in some way, and a couple of assassins work as roofing tilers, their preferred method of despatch being a well-thrown, sharp-edged tile. There’s a local gangster who runs an illegal brothel where he mistreats the girls, one of whom wants him dead because he killed the only thing she cared about in the whole world, a little kitten. 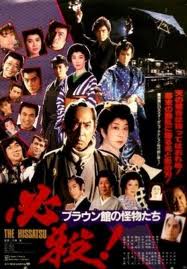 But as for who is who, who does what or why, I am stumped.

It’s a fantastic film to look at. The cinematography is gorgeous and the use of colour and geometric shapes in the compositions sometimes takes your breath away with its audacity. Though made in 1984 and based on a series which ran from 1972, the film looks much more like a product of the 1960s, especially in terms of editing, title sequence and music, which has a very spaghetti western feel to it.

What I suspect is that there’s a lot of comedy in this which just doesn’t make it through to this subtitled version. Without being silly or wacky, there is definitely a slightly tongue-in-cheek element, as in a sequence where they look to recruit other assassins and we meet one guy who runs a pet shop and has trained a small bird to peck poison onto people, and another who is a professional earwax remover and uses a concealed needle to stab people in the brain. Another assassin uses the ‘mole’ technique, of burying himself by corkscrewing straight down, then burrowing up to his victim before leaping out. This part of the film reminded me of the audition scene in Mystery Men. 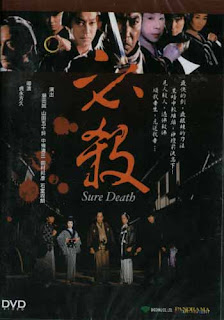 But if there’s any element of humour in the dialogue it does not make it through to the English subtitles, and any character comedy is entirely lost on a British audience by our unfamiliarity with these characters. Because this is a spin-off from a popular TV series, there’s just no explanation of who anyone is; it’s aimed fairly and squarely at fans of the show.

A terrific, exciting piece of period drama, but completely mystifying. Don’t expect the DVD notes to put the film in context or explain anything, because I wrote them and you can see precisely how little I’ve been able to find out about the film!

Email ThisBlogThis!Share to TwitterShare to FacebookShare to Pinterest
Labels: 1984, Japan