The Day After Dark 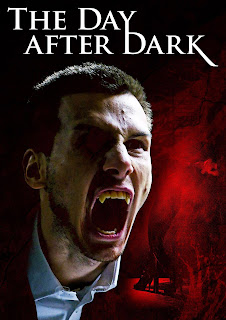 The Day After Dark is a half-hour vampire short from Damian Morter, director of the terrific Book of the Dead (aka The Eschatrilogy) and the impressive but unreleased Bicycle Day. It’s a good-looking, well-produced picture with a solid central performance from Dawson James, but it’s not exactly overburdened with plot.

James (whose own short films include the sci-fi pictures HUD and Scale Down) plays Christian, a young man staying in a hotel for unspecified business reasons. His creepy boss Robert (Nicholas Burman-Vince, credited as just Nicholas Vince: Chatterer in the first two Hellraisers, more recently in Ashley Thorpe's Borley Rectory) calls him from a dodgy nightclub to explain that he has arranged a visit from an ‘escort agency’ for his star employee. A young lady (Sarah Dunn: The Stone: No Soul Unturned, House of Sin) duly turns up, clad in provocative red, gives Christian a lap-dance and then munches on his jugular – which would probably be a shock if someone came to this blind but most viewers will be aware that they’re watching a vampire film so will be fully expecting this. (They will also be wondering whether Robert's clearly visible red drink is just a Bloody Mary or whether the guy is actually in some sort of secret vampire establishment sipping type AB negative.)

(A quick note on Sarah Dunn as there are several performers with this name. This is the blonde lass from Manchester who sang 'Barbie Girl' on The Voice. Also does gigs as a Kylie tribute and does parties as Elsa from Frozen. Not to be confused with Sarah Dunn the former Miss Essex who plays Angelina Ballerina on stage and does gigs as a Jessie J tribute; or Sarah Dunn who was on X-Factor in 2010 as part of girl group Rococo; or the lead singer of American country and western act the Sarah Dunn Band; or indeed Sarah Jayne Dunn off of Hollyoaks. Anyway she's actually credited on screen as Sarah Cragg, which seems a sound professional move.) 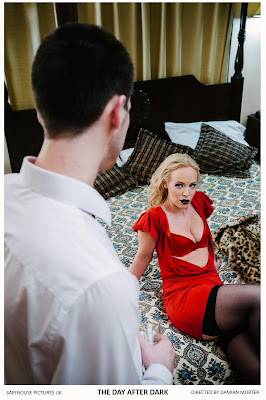 The next day Christian awakes with confused memories of the day before, an aversion to sunlight, increased strength and a hankering for raw meat (there’s a nice little comedy scene with a waitress: “Well, I’ll ask the chef…”). However this is actually quite confusing because, Christian having just awoken and gone down to the hotel dining room, we assume he’s having breakfast. But he orders “the steak” and other people are drinking wine so - what, is it now lunchtime?

Wandering around afterwards, he despatches a couple of muggers before an encounter in a late-night car park reveals what he has become (which is fairly obvious, let’s face it) and why (which is a bit vague and unsatisfying, to tell the truth). He has a moral dilemma at the end, a choice which he sees as "no choice", then there's an unexplained, very brief final scene somewhere else, the significance of which is not clear.

The problem with The Day After Dark is that it’s all set-up. It feels like the first act of a feature or the pilot for a TV series. What will (or might) happen to Christian afterwards promises to be more interesting than the frankly generic story presented here. There is a sort of three-act structure admittedly: the phone call and lap dance; the breakfast and the muggers; and a very static, talky last ten minutes or so as Robert explains what’s going on. But we never find out anything about who Christian is or where he is or why he’s there or what he’s doing. He’s a completely blank canvas and consequently very difficult to empathise with.

The fact that his boss makes business-related calls from a pole-dancing establishment strongly implies (to this reviewer at least) that the two are involved in some seedy, probably illegal operation but if this is the case then it’s not touched upon. This is again problematic: is Christian a decent, honest bloke whose boss has decided to ruin his life (for his own Machiavellian ends) by ‘turning’ him; or is he a well dodgy minor gangster who deserves everything he gets? Christian doesn’t seem to have any serious qualms about calling a hooker recommended by his boss, and he evidently knows what’s expected when she gets there. So is he a good boy or not? Is he an innocent victim, or paying the price for getting mixed up with whatever nefarious business Robert runs? 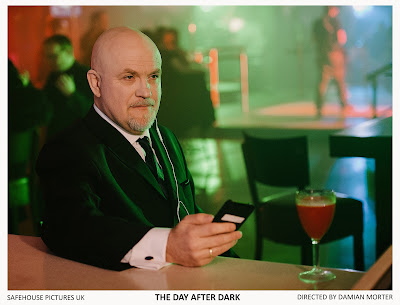 Technically and artistically, The Day After Dark is some good, solid work (as one would expect from writer-director-editor Damian Morter), albeit bedeviled with a few pedantic, distracting background snafus. Christian’s phone seems to appear and disappear between shots; Robert asks him to look in the bedside drawer but it’s actually a cupboard; and in the restaurant scene an extra playing a different waitress, taking the order of a guy with a really stupid haircut at the next table, is still standing there a couple of minutes later. Well, she’s not going to last long in that job, is she?

The plot here is, in a nutshell: man gets turned into vampire. But that’s not a story, that’s an incident. I’ve recently been working on some two-minute scripts for The Impact, a project that Chris Jones (of Urban Ghost Story and the London Screenwriter’s Festival) is organising, and it got me thinking about what constitutes a story. It seems to me that a story, in its simplest form, is when something happens because of something else. There has to be both cause and effect. And that’s what’s missing here. If Christian being vampirised is the effect, we don’t have the cause. Robert’s explanation essentially boils down to him thinking that Christian is the sort of bloke that the vampires should have on their side, but there’s no justification for this: Christian isn’t special in any way: why him, why now? Conversely, if Christian’s vampirisation is the cause, then we’re left to guess the effect - on Christian and on Robert’s vampire society - as the credits roll.

‘Man gets turned into vampire’ is all well and good but it's only ever going to be part of a story. Furthermore we need to meet the man beforehand so that we can see the difference. We know absolutely zip about Christian, hence we’re looking everywhere for clues. Is he a gangster? Is he a shoe salesman? Is he married or single? Gay or straight? Does he have any friends or social life? Is he a workaholic? We look, but there’s nothing to see – and it’s quite possible that this enforced, unfulfilled attention to detail actually impairs the movie by increasing our likelihood of spotting irrelevant minor goofs like the moving phone and the static waitress. 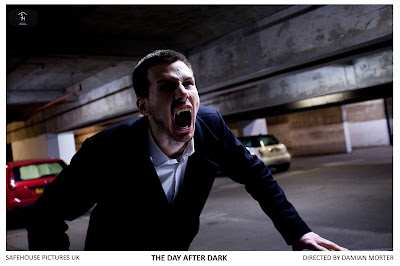 The cast also includes Clay Whitter (Banjo, The Lost Generation), Zoe Simone (Bicycle Day), Kris Sommerville (Cockneys vs Zombies, Shame the Devil, Eve's Demons) and Tim Grieveson. All of those were also in Book of the Dead. Rock guitarist Mik Crone is a policeman; Sandy Slade (Wasteland and assorted Philip Gardiner pictures) is in the epilogue; one of the pole dancers in the opening scene is Jane Haslehurst from Legacy of Thorn.

I enjoyed The Day After Dark. It's well produced and deftly directed - but I couldn't help but be disappointed at its lack of narrative ambition.