After reviewing the extraordinary short film The Stomach, I had to find out more about the film and the guys who made it. Writer-director Ben Steiner and producer Dan Dixon were kind enough to answer some question from me in October 2015. 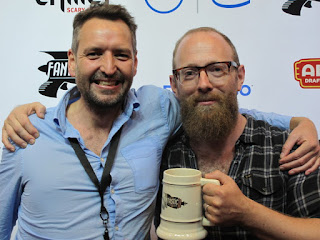 Where did the bizarre central idea come from: a medium communicating with the dead via their stomach?
BS: "My first short, made twelve or so years ago, is about a cannibal human-meat salesman who develops the so-called 'shaking disease' common among habitual cannibals, and dies. I was ruminating on that short and got to thinking: 'what if, instead of a disease, he was tormented by the souls of the people he'd eaten, haunted from inside?' At the time I was reading Beyond Black by Hilary Mantel which is about a spirit medium, and also the bleak British crime novels of Derek Raymond, and all those threads combined into the idea for The Stomach."

What was your background in film-making before this?
BS: "I'm a self-taught writer and director. I used to do a lot of drawing but now don't have the time alongside my filmmaking and family commitments. My day job is advertising writing and I've written a few TV ads including a Gocompare campaign that Ben Wheatley directed."

DD: "I was first producing and directing in TV, and then moved over to visual effects production working at places like MPC, Framestore and Aardman. I most recently producing at The Imaginarium, Andy Serkis’ motion capture studio in London on the last Avengers film and Godzilla. I made some shorts at university but haven’t been inspired to get involved in anything else much until I met Ben; I loved his previous films and thought The Stomach was a brilliant concept..." 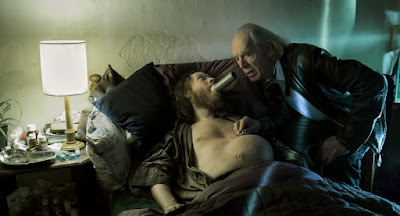 Can you tell me a little about the practicalities of the production: budget, schedule, locations etc? Did it all go smoothly?
BS: "We shot The Stomach in three and a half days, the film cost £15K to make (which we self funded as we could afford it at the time and didn't want to wait around for funding bodies to give us permission - or more likely not). We had the usual stresses of a low budget shoot but post production really did drag on - finding the right people was tough. We kissed a lot of frogs, so to speak. But we did work with a lot of great people across all departments, quite a few of whom we're hoping to work with again."

DD: "Something specific that the film required was for the lead (Simon Meacock playing Frank), to gain a more emaciated look than he does in normal life. As Ben had worked with Simon several times over the years and the part was written with him in mind, he was always going to play the role. This certainly helped as he was able to get his weight down over time, and then keep it low during prep. Our prosthetics guru Dan Martin, had to take a body cast of Simon (as well as requiring several subsequent fitting visits) and used this as a template for making four different versions of 'The Stomach': flat, mid size, full and then ‘empty’; so we needed his weight not to change while these were being made so that everything would fit properly during the shoot. Simon lost about 1.5 stone over 4-6 months by eating less, cutting back on the carbs and booze, and exercising more."

The film has played a lot of festivals: what sort of reactions has it had from audiences? Is it too weird for some people?
BS: "We've been amazed by the reaction the film's got. We're proud of the film, particularly the originality of the core idea, but we would never have dared to imagine it would go down as well as it has. Obviously, we're delighted. And it suggests that audiences want to be challenged and want to see horror taken in unexpected directions rather than riff on the same old tropes. Which is lucky for us as that's exactly how we feel."

DD: "Winning awards has been great for us and the film (22 so far), and we’re fortunate enough to have a few audience awards amongst them, two of which are from non-genre festivals, so I guess it demonstrates that audiences, genre or not, are able to connect to the film which is a fantastic result for us." 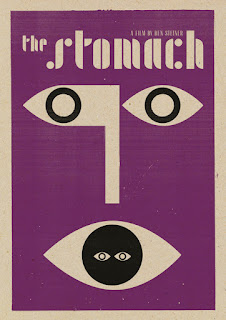 How will the proposed feature version of The Stomach expand on the story of the short?
BS: "It doesn't expand on the story in the short as such: it starts the same way but then goes somewhere else. The worst thing we could do in the feature is just show the stuff that's implied in the short. I don't want to say too much about the plot of the feature but the intention is to retain the vibe of the short but explore new territory (figuratively and literally)."

What other projects are you developing?
BS: "We have three other feature projects: a fresh. modern and extremely disturbing haunted house film called Dead Windows; a hallucinatory occult thriller called Mr Sundown and a mind melting account of a real-life vampire hoax that gripped Britain in the 1970s. We're pushing forward with all four and seeing which one flies first."