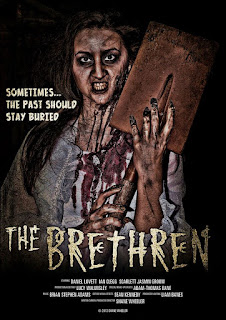 The Brethren looks gorgeous, is finely crafted, has an original and suitably disturbing plot, and I haven’t the slightest clue what it’s actually about.

It’s always difficult to synopsise a ten-minute film without just describing the whole thing. But here’s the basics. A young man wakes up, goes into his garden, digs a hole in his lawn and removes an old wooden box. Inside are six sealed glasses of liquid. He drinks each one in turn, and something weird happens after each glass.

I could tell you specifically what happens, in the sense of describing what is on screen, but what would be the point of that? The film’s on Vimeo. It’s ten minutes long. Watch the damn thing yourself. Then tell me what you think is going on.

I have no doubt that director Shane Wheeler knows what’s going on, but frustratingly that’s not communicated by the film itself. Which wouldn’t be so bad if this was a cheapo piece of silliness but clearly great time and trouble has gone into this. And the results look great. But every film brings together three elements: the artistic, the technical and the narrative. Full marks on the first two; see me on the last. 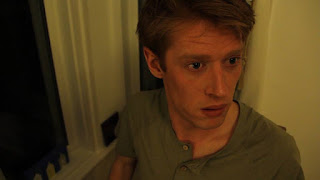 Let me give you an example. The film’s synopsis says “A young man awakens from a vivid dream, compelled to go outside and dig in his garden.” But what we see is: a young man wakes up in the middle of the night, goes out to his garden and digs a hole. We have no way to know that he is doing this because of some compulsion, and certainly not that he has had a vivid dream. He could be digging up his lawn at half past one in the morning for a number of reasons. Maybe he was instructed to do so by someone last night. Perhaps he meant to dig up the lawn yesterday evening, forgot to do so and has woken up thinking “Oh shit, I’ve left that wooden box under the back lawn.”

Perhaps this was deliberate: he knows there’s something down there and wants to dig it up while none of the neighbours are watching. Perhaps he’s fulfilling a prophecy. Perhaps he’s just a nocturnal gardener. We don’t know any of this. We just know he digs up a box. We don’t know if he buried it, if he knew it was there, if he has been searching for it for years or just dug randomly on a whim.

The Brethren is a succession of impressive images but the narrative is too obtuse to work. I’m a great believer in ‘show don’t tell’ but what you show has to do the telling instead. This isn’t a film like Devil Makes Work which was basically a film poem, a pop video without the music. I’m sure there is a narrative in these 12 minutes and I’m frustrated at not being able to access it. Why is the box under the lawn? Why does he drink the liquids? Who actually are 'the Brethren'? Damdifino. 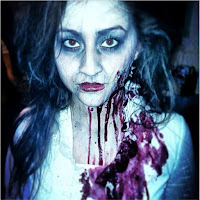 For most of the cast and crew, this is their first IMDB credit and it’s a good showcase. Adam-Thomas Bane, a freelance body-painter and stilt-walker, provided the make-up on Scarlett Jasmin Groom whose ‘conjured spirit’ is seen briefly but features prominently in the publicity.

I feel bad criticising a film made with such care and passion, but a film rests on its script, and the script here is too full of ellipses to actually tell a story. Still, I very much look forward to seeing what Shane Wheeler does next.