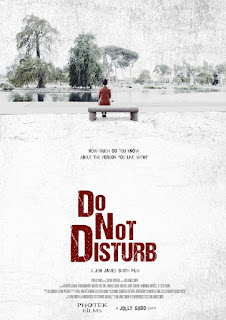 Well, here’s an absolutely terrific little short that ticks all the right boxes. Do Not Disturb is a skilfully crafted thriller with a twisty-turny plot and really the only criticism I can lay against it is that, once it has subverted our expectations a couple of times we no longer believe anything it tells us. Which unfortunately makes the final twist completely predictable. But this is so well made, in every respect, that this really, really doesn’t matter.

Running just 14 minutes, this is tautly plotted; not a word of dialogue, not a shot or edit is wasted in telling us an actually quite complex story. I’ve seen films that took 30 or 40 minutes to tell a tale simpler than this.

George (Ron McMahon: The Witch Chronicles) is a married businessman with a penchant for motels and hookers. When his latest rental proves more interested in violence than passion, he’s forced to tell his wife Margaret (Kathryn Leeman) to empty all the bank accounts as ransom for his release. And more than that it would be remiss of me to tell you. I came to this film completely blind; I recommend you do so too. Only to note that the other main role, Detective Forbes, is played by Richard Shelton who used to be Dr Forsythe in Emmerdale and is now a Hollywood actor and Frank Sinatra impersonator! 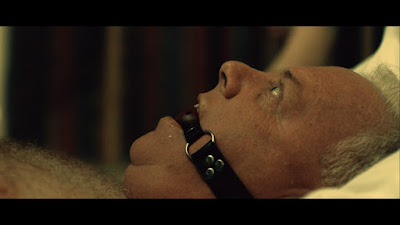 It’s Jon James Smith’s attention to detail that really impresses. After a night tied up, the first thing that George’s kidnapper does is pour a little water into his mouth. A scene on some baseball bleachers has one other person sitting there: no-one would have sent the wrong signals, as would multiple background extras. Just that one guy, in that one place on the screen: that’s what good mis-en-scene is all about.

The camera-work by Leonardo Agrizzi Netto (Harry and the Succubus, Making a Monster) is bang-on, in both the lighting and the crucial framings which are as much a part of the story-telling as the actors and the script. And a big thumbs-up for sound mixer/recordist Elizabeth Avalos whose work is a huge part of the film’s success. It’s clear that writer-director-editor Smith and producer Alexander Glenn Prather have pulled together a talented cast and crew who have synched perfectly.

Smith is a British director/cinematographer whose DP credits include Anthony Powell’s short Slashimi and Jason Croot’s original Le Fear (but not its sequel). His previous shorts as director were Spira (horror) and Linen White (sci-fi). For Do Not Disturb he travelled out to LA with a mixture of British and American crew, and he considers this a UK/US co-production – which is good enough for me. 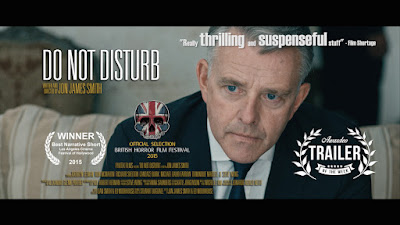 Do Not Disturb has won a bunch of awards including some at the 2015 British Horror Film Festival, and is scheduled to screen at the 2016 Horror-on-Sea. Which is slightly odd because, apart from the opening scene with the prostitute (who owns a Stanley knife) there’s nothing approaching horror here and I certainly wouldn’t class this as even a borderline horror film.