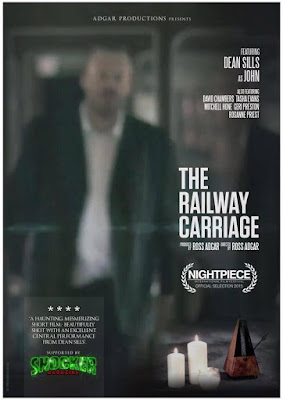 I seem to be getting sent a lot of non-narrative films recently. Or at least films which are so obtuse in their storytelling as to be effectively non-narrative. I don’t mind. I’m not some reactionary old duffer who believes that a film must have a beginning, a middle and an end (in that order), although I can’t deny I do like a good hero’s journey. Even if it’s just the old climbs tree, falls out of tree, is he alive (comedy) or dead (drama) hero’s journey.

The Railway Carriage is ten minutes of imagery which is probably meant to be allegorical or metaphorical or symbolic but comes across more as hallucinatory. We have an old church, containing a few candles and a metronome. And we have an old-fashioned railway carriage (empty, stationary) containing a framed photo and an old-fashioned portable radio. The photo is of the two teenage children of our protagonist, John. The radio carries a news story about a father (presumably John) abducting his children from his ex-wife and killing them.

In some way, this railway carriage and this church are the same place, in that when John steps out of the church we cut to him in the carriage and vice versa, although naturally our initial assumption is that there is an edit there and he has travelled between the two. Like I say: hallucinatory. The two children appear intermittently in the carriage, dressed as they are in the photo. 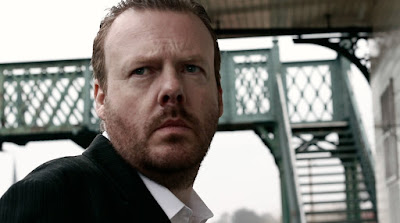 Eventually John wakes up somewhere else, although I’m not sure whether that’s meant to be a return to reality or more of the dream. If the former, it raises the unanswered question of why he has a metronome on his bedside table, which is an odd thing to have. (As indeed is a very collectable vintage radio.)

The Railway Carriage is competently and sincerely made, but I’m afraid that it left me cold. Does it just represent the anguish in the head of a man who has lost – either literally or metaphorically – his children? That’s the only interpretation I can come up with, but that’s a bit clichéd and obvious. There must be more to it than that, surely. And: apart from being a nice location, what is the actual significance of the railway carriage? Or indeed of the metronome?

I’m not looking for pat, simplistic answers, but that’s probably because The Railway Carriage didn’t really raise any questions. A film like this should make the viewer think, but it only makes me think about this film - What does it mean? – instead of making me think about the subject of the film, whatever that might be.

The Railway Carriage bills itself as a horror film but that doesn’t come across. Dean Sills (Blaze of Gory, Cleaver: Rise of the Killer Clown, Xmas Creep Tales) delivers a solid, largely wordless performance as John but he seems only confused, not frightened. The film is dreamlike but not nightmare-ish and I really couldn’t say in what sense it could be considered ‘horror’ except in the very basic sense that (a) our protagonist doesn’t know what’s going on, and (b) there are references to two kids being killed.

Writer-director-producer Ross Adgar set out to tell his story in an ‘unconventional way’ which is very laudable, but conventions exist for good reason. Conventions aren’t clichés, they’re tools that allow a storyteller to tell a story without getting bogged down in details and allow audiences to concentrate on what's important. If you leave out the conventions you’re working without your best tools. 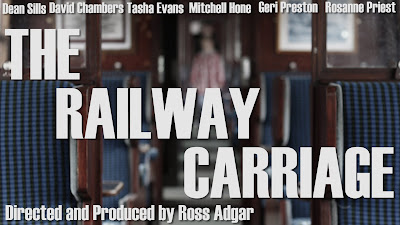 Rarely am I completely ambivalent towards a film, but I’ve watched The Railway Carriage twice now and it has just washed over me. I felt no involvement, I took no interest, I found no empathy. Sorry. Nevertheless, it has been picked up for a couple of festivals and Ross Adgar shows definite promise. But for his next film he needs to explore how cinematic conventions can help and support him, if used skilfully, rather than aiming for something abstract which renders itself inaccessible and hence unsatisfying.