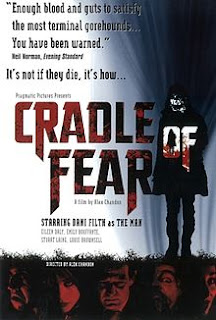 Alex Chandon, the enfant terrible of British independent film-making, has scored a definite bullseye with his latest feature, the gory, violent and hugely entertaining anthology Cradle of Fear. Dani Filth, the voice of Dominator and lead singer of goth metal band Cradle of Filth (for whom Chandon directed two very dark and disturbing promo videos), is The Man, an enigmatic figure in the control of a convicted child killer who provides the link between four stories in which not terribly pleasant people are killed in particularly nasty ways.

A girl who picks up a stranger at a nightclub experiences a sudden, hideously fatal pregnancy; two other young women who rob an old man’s flat get their just deserts; and there’s a terrific spin on the old transplant-from-a-murderer scenario - a sort of The Leg of Orlac. The final tale in the quartet is possibly the first internet-based horror story ever successfully presented on film; the deeply unpleasant images on view here actually look like they’re on the web, rather than what some know-nothing designer still living in the 1970s thinks a website might look like. 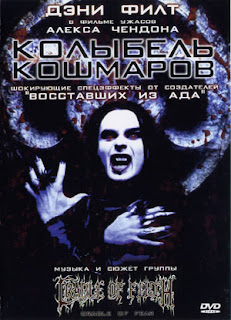 Whereas Bad Karma wore its low-budget on its sleeve, and the effects in Pervirella were deliberately cheesy, with this third feature Chandon has really come into his own, utilising all his resources to make a film which looks like it cost twenty times what it actually did. There’s blood, dismemberment, monsters, freaks and general weirdness aplenty, and all looking much better, more effective and more horrific than most modern so-called horror films.

The anthology structure (a tip o’the hat to the old Amicus films) means that Cradle of Fear doesn’t drag, despite being two hours long. The BBFC being what it is, Alex initially distributed the film from his website in an ‘unrated director’s cut’ although it is now available in shops.

Heartily recommended, this is the first great British horror film of the 21st century.

MJS rating: A
review originally posted before November 2004
Posted by MJ Simpson at 19:31