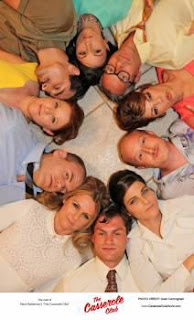 The Casserole Club is only 95 minutes long but when it finished I felt like I’d travelled a million miles. It ends with the Moon landing - well, a Moon landing - which is the third external event to intrude into the lives of its principal characters. In the first act, it’s the death of Judy Garland (22nd June 1969 to save you a trip to Wikipedia), in the middle act it’s the Charles Manson murders of Sharon Tate and others.

This seems a somewhat random trilogy of events from a year that wasn’t exactly short of significant happenings but in retrospect I think I see what Steve Balderson and screenwriter Frankie Krainz (who also penned Stuck!) are doing here. This is a film about a descent into chaos, a group of people becoming more and more self-obsessed, more and more detached from anything external to their plastic and astroturf world. So at the start, something as relatively innocuous as the accidental death of a famous film actress shocks them to the core. In contrast, their reaction to the horror of the Manson Family is almost blasé. And the final line about the Moon is, well, a stroke of genius, one of the great pay-off lines of indie cinema, a zinger that sent me scurrying to YouTube just to verify that the archive footage I had just seen was what I thought it was. Which it was.

The Boy Balderson has done it again. Another awesome film that is completely different to what he has done before yet fits into his overall body of work. If I didn’t rate this, I wouldn’t praise it. Seriously. I didn’t rate Steve’s work-for-hire belly-dancing documentary and I said so. But The Casserole Club is magnificent, another tour-de-force by the best kept secret in American cinema.

This is the tale of five couples in perfect Californian suburbia (for some value of perfect). It’s a world straight out of Better Homes and Gardens. Neatly trimmed hedges, tastefully arranged ornaments, modern but not radical furniture, pool in the back yard. No kids, no pets, no outside world. Absolutely no black people. A brief scene on a golf course is the only time we ever leave the street where these ten people live. Two other couples intrude briefly into this world but only to show how insular it has become. Punk poet Iris Berry in a non-speaking cameo role credited as ‘The Broad’ is the fifteenth and final member of the cast. 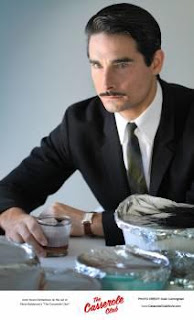 Tellingly, we are never given any clue as to what the husbands’ jobs might be. We don’t know if they even work together. But we know what the five women do. Though they may be different - innocent Marybelle, wild Florene, wholesome Kitty, wry Jerome, honest Sugar - they all live basically the same 1960s, middle class, WASP existence, cooking and cleaning for their husbands. They are - please forgive me, for I have been waiting nearly two hours to type this - disparate housewives.

Florene’s (Balderson regular Pleasant Gehman) husband is Burt (Hunter Bodine: Starship Troopers, Flying Virus) and they’re a totally liberated couple, entirely suited to each other and enjoying the benefits of the swinging sixties in a very literal way. In direct contrast are Kitty (Starina Johnson: Watch Out, Stuck!) and her husband Sterling (co-producer Garrett Swann), who don’t even share a bed. Not through any tension or frigidity, it’s just how comfortable they are with each other. Florene and Burt are very public in their displays of affection; Kitty and Sterling are just as overt but more discrete. But both relationships seem to be based on mutual respect, certainly much more so than Sugar and Connie. 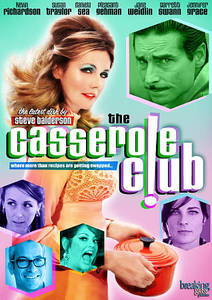 Marybelle (acclaimed stage actress Jennifer Grace who gets an ‘and introducing’) is concerned about her make-up but through insecurity, not vanity, while her husband Max (Michael Maize: National Treasure 2, Power Rangers in Space) seems a straight-down-the-line guy: not as callous as Connie, not as blatant as Burt and not as starched as Sterling. Finally there’s Jerome (Daniela Sea: The L Word), who is something of a lush, and her honest, regular husband Leslie (Mark Booker: Watch Out and a horror movie called Bane which isn’t this one) who tries his best to fit in with this crowd even though he obviously doesn’t, in his heart of hearts, fit in.

Trying to sum up each of these characters in a few adjectives and the occasional noun is a hiding to nothing because they are all too complex. And as we discover over 95 minutes how complex they were to start with, they get more complex still, both individually and in the way they relate to each other.

The film could have been called Three Parties and an Aftermath (though I’m glad it wasn’t). The whole of the first act, a full half-hour, is that first casserole club get-together. It all starts innocently enough but the scotch and the martinis are flowing and gradually things get more, well, bawdy. There is discussion over the dessert of why ‘cunt’ is such an emotive word. There is no male equivalent suggests one husband but another argues that the male equivalent is ‘fag’ and there is some etymological discussion of both words. This sequence will pay off later in at least two different ways.

After dinner, there’s games which become more physical until, when Kitty’s tits accidentally fall out of her dress, she decides it’s time for a midnight skinny-dip and finally the flood-gates are opened. Bodies writhe together, in and out of the pool. We can’t always see who is with who but the point is not so much the individual pairings, rather the variety. It’s the breakdown of civilisation - or as close as anyone could get to civilisation in the artificial, teflon-coated hell of 1960s Californian suburbia. 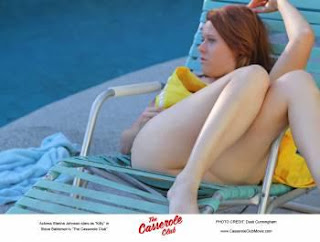 And in the morning, things have changed but people try to pretend that they haven’t. They sheepishly don their underwired bras and their tighty-whity underpants and head home to carry on as normal. Unwisely, the Casserole Club decide to meet again, to try one more time to have a civil, civilised dinner party. But Florene has other ideas. What happened in Act One was normal for her and Burt; they don’t see the harm. So instead of a casserole, Florene has baked some very unusual cookies as appetisers. They’re delicious, quite more-ish: “Oh my, is that ginger I taste?”

No, of course it isn’t (though Steve and Frankie have enough sense not to explicitly state anything: show, don’t tell).

And so it all happens again, only more so. People push the envelope that bit further. Some enjoy it, some think they enjoy it, some don’t understand how much they enjoy it, maybe some don’t enjoy it. In among the almost random coupling and cross-coupling, Max and Sugar are locked away, locked together. He’s a real man, giving her what Connie can’t while Connie is giving it to others beside the pool.

Now everything has changed, now the sense of denial has metamorphosed, dangerously, oh so dangerously, into a sense of acceptance. Now these people believe they’re fucking invincible.

That first party was a full half-hour (less a few minutes for the opening titles), the second is 20 minutes, now things start moving faster. A third party. New people introduced into the group (one of them is Balderson’s lucky charm, pop goddess Jane Wiedlin). Some accept the strangers, some don’t like the idea. The strangers themselves don’t all realise what’s going on at first. It’s out of control. It’s more, faster, better, worse, pushing the limits, pushing every limit, pushing people over the edge. We know it’s going to end badly. And it does. 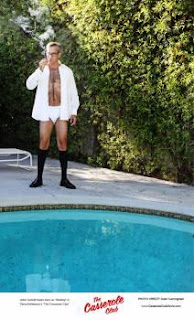 The third act is the shortest of the three as everyone comes to terms with the consequences of their actions. Or doesn’t. For some it’s self-loathing, for others it’s just loathing. And for other’s it’s arguably just self.

People have been changed forever, to greater or lesser degrees, but no-one is the same. Some people have become further trapped in the world they have created for themselves, others finally see a way to escape. It hasn’t killed them so it must have made them stronger. Some couples are further apart, some are closer. Nobody is the same. And there’s the Apollo Lunar Module, that step onto the surface, those words. No, not those words, those other words.

And the viewer leans back, exhausted, feeling like he or she has also been through something and also come out the other side. I honestly can’t see how anyone could walk away from this powerful, emotionally draining film without a head full of thoughts fighting for space, ideas clashing like gladiator’s swords.

The cast are uniformly magnificent and work together brilliantly. Steve’s direction is faultless. Rob Kleiner’s score is literally note-perfect, seamlessly blended with a selection of spot-on faux-sixties songs. Production design, costumes, hair and make-up, all exactly right. That is, I assume they’re right for the period (I was one, and several thousand miles away, in 1969) but I know they’re right for the film.

This is a Steve Balderson joint after all and if there’s one thing that unites Steve’s movies it’s a very slightly heightened reality. It’s a mixture of design, script and camera-work all just turned up to, if not eleven, maybe ten and a half. It was there in Pep Squad, in Firecracker, in Watch Out, in Stuck!; it's what was missing from Underbelly; it’s very definitely there in The Casserole Club. From the opening shot, Steve’s photography is colour-drenched, creating a world that’s not just technicolour but effectively Technicolor. There’s nothing pastel here, just blocks of vibrant colour: the clothes, the furniture, the water ... the skin... 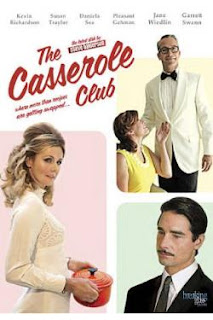 And as before, the only reason I’m not giving this A+ is because I want to see what Steve Balderson can come up with that is even better.

Email ThisBlogThis!Share to TwitterShare to FacebookShare to Pinterest
Labels: 2011, USA