Michael Clark, producer of (and actor in) Scottish sci-fi feature The Planet, kindly answered some e-mail questions in October 2007.

The film cost £8,000 - what did that money actually buy for you?
“Speaking as the production design and props chief, the budget I was allocated was possibly a third of the amount. With it I had to create everything seen in the movie that wasn't animated or speaking. The weapons and many of the props were scratch built, the costumes (German Flecktarn camo) probably ate up most of the rest of the allocation. The transport, space pod and HQ tent were donated, so didn't come off the budget.

“Other production costs were for software and media (hard disks, IT etc.) which took another large bite out of the budget, followed by running expenses for the 11 day shoot. The full £8,000 figure includes advertising and marketing, so the actual movie was created for much less than the final cost.”

Was there anything you wanted to do in the film but were unable to?
“Spacecraft sets were way out of our capabilities and budget at the time. We had initially planned on building a few, but the limited budget and space meant using virtual sets and blue screen instead. Also, the mile-wide debris field of burning metal from the crashed spaceship never made it past the storyboard - that was a shame.”

With such a small crew, how was the work allocated?
“Initially the whole production was split into two, between Mark Stirton and myself, luckily when Kerwin Robertson and Nicky Fraser came on board that changed. Mark, as company chief, allocated the workload, but still ended up doing most of the work. Mark - writer, director, editor, digital effects, creature animator and sound design. Me (Mike Clark) - producer, production designer, props, animation and marketing. Kerwin Robertson - co-producer, modeller, animator and super IT guy. Nicky Fraser – composer.”

What aspect of the film are you most pleased with?
“From the aspects I was involved with, the outfitting of the mercenaries and their weapons worked out well. I’m also happy with the look of the spacecraft and environment. Even though it now looks a bit Babylon 5, it was still miles ahead of what Kerwin and I could do before starting on the movie. My favourite bits though are the planet shots from space; from a purely personal point of view, it’s some of the best stuff I’ve done.” 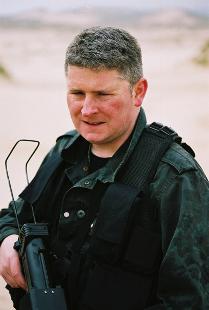 If you had to make the film all over again, perhaps with a slightly larger budget, what would you do differently?
“Make it in a warmer country with proper catering facilities! Use real firearms and prop fit them for the shooting scenes, that would save the months of post-production Mark had to go through making them fire. Shooting in 35mm, or at least 1080p, hiring a professional digital effects crew and also a few named actors.

“The cast we had on The Planet worked really well and we are currently using a couple to lead in the latest production One Day Removals, but casting a few names doesn’t harm the box office returns any. Basically, most of the movie would be done differently, but the basics would stay the same. We’re still really pleased with the original.”

What has the response to the film been like from audiences and critics?
“On the whole we’ve been really surprised by the response. We’ve never pretended the movie was anything it wasn’t and I think people have appreciated that. So far we’ve had very few negative comments from reviewers and critics; most are surprised at how little a feature length SF movie - that doesn’t totally suck - was made for. The production values, cinematography and sheer effort involved have received praise from public and many industry professionals.

“At a time when huge budget Hollywood films are getting increasingly derivative I think people are happy to see something original, that doesn’t explain everything, and perhaps may even make them try and think.“