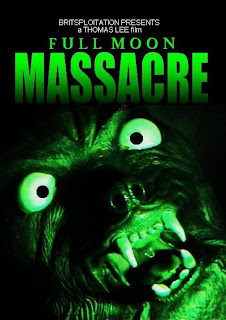 Full Moon Massacre is the debut feature from teenage director Tom Rutter who makes films as Thomas Lee and posts on forums as ‘britsploitation’. It’s barely feature-length at 65 minutes but that’s still longer than recent Full Moon pictures (if you discount their glacial end credits) and is commendable brevity for a picture of this type.

Tom shot this for as close to no budget as makes no odds. Most of the cast are his mates or family, most of the locations are around his home and his werewolf is a rubber mask/handpuppet with pingpong ball eyes for which the adjective ‘unconvincing’ would seem to have been purposefully created. But this is a likeable and enthusiastic horror spoof with some suitably silly, Troma-esque gore effects and a few genuine, deliberate laughs (“Was it a poodle?”) in both the dialogue and the direction.

Lee’s full tally of credits is director, writer, producer, editor, photography, special effects creator and puppeteer; he also plays the main character (named Tom) but nobly and sensibly keeps his name off the list of actors on the sleeve.

Attacked by a werewolf in Newcastle, Tom returns to Birmingham where he meets up with his pal Jay (James D Messer) who has a new girlfriend named Kate (Toni Bird). Tom owes money to local wannabe gangster Dino (Dean Greatbatch) but has bigger problems in his regular lycanthropic attacks, which leave a trail of zero-budget death and destruction across the West Midlands. Into this mix comes Ken Mood, reprising his Axel Falcon character from A Home for the Bullets and its zombie-filled sequel A Grave for the Corpses (which I haven’t seen). The director of those two films, SN Sibley, gets an executive producer credit here.

Shot over a considerable period of time, reflected in the changing hair-lengths of some actors, Full Moon Massacre incorporates some footage from an abandoned zombie project, mostly around the Jay/Kate romance. This shows up briefly towards the end when the young couple are cowering in a garage from Tom’s lupine monster and talk about the threat as “them”. But on the whole, considering that this film was shot mostly on the fly with no real script and incorporates parts of another, unrelated film, Lee has done an impressive job of making some sort of sense out of the whole thing.

There is the expected over-the-top, tuppeny-ha’penny effects: arms ripped off, a tongue pulled out by the roots etc. It won’t fool or scare anyone but it’s all great fun. The director’s influences are obvious in the large collection of videos and DVDs in his bedroom, including numerous titles produced by Lloyd Kaufman or Charlie Band.

Lee keeps his camera tight on his subjects in many scenes, cutting backwards and forwards but rarely indulging in a two-shot or over-the-shoulder shot-reverse-shots. I suspect this could be because some of the dialogue scenes were probably filmed with the two actors separated by a considerable distance and a lengthy amount of time.

Andrew John (62 Pages) has a brief role and gets an ‘additional photography’ credit while the director’s mother has a cameo as a taxi driver (with one terrifically apt line: “This isn’t a taxi.”). Also in the cast are Colin Cuthbert, David J Nock (who was production assistant on The Killin’), Sean Kenney, Phil Wilden and Yours Truly as TV reporter Griffin Dingley. I certainly had a good time shooting my scenes and I hope that comes across (most of my stuff is halfway through the film but I also crop up in the end credits and you can catch even more of me in the gag reel on disc 2!).

Nobody is ever going to mistake Full Moon Massacre for a professionally made feature film. On the other hand, it’s a few steps up from the Dad-can-I-borrow-the-camcorder school of film-making. The characters are distinguishable and sympathetic, the sound is clear, the lighting is competent, the pacing is kept up and the fun and enthusiasm which went into making this film comes across. Being completely honest, this is going to appeal to friends and family of the people involved and werewolf or British horror completists. But far, far worse horror movies have been shown at little local film festivals around the UK.

Every director has to start somewhere, every director has to make that first feature. You learn from experience. Thomas Lee clearly has the talent and the determination to make movies and will, if he sticks at it, go on to bigger and better things. His debut is good, gory fun which, while it certainly doesn’t overcome is deficiencies, at least manages to distract the viewer’s attention from them.