Feast for the Beast 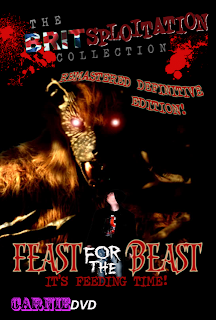 Thomas Lee Rutter’s third feature is in some ways his best to date - as one would expect - but not in every way.

Full Moon Massacre featured a werewolf, Mr Blades was about a masked psycho; Feast for the Beast has elements of both. Well, not actually a werewolf. I think it’s supposed to be a demon of some sort. But it’s a werewolf costume, it’s black, sightless eyes a considerable improvement over the ping-pong balls in Massacre.

Wayne Davies stars as Stuart, a heavily tattooed, apparently unemployed young man who returns to his home town of Kidderminster to get his life back together. He takes an upstairs bedsit in a dingy Victorian villa. His landlord, who asks to be called ‘Sir’, is an unnerving, rubber-faced weirdo, played quite brilliantly by unnerving, rubber-faced actor Luke Coates. ‘Sir’ seems curiously eager to rent out the room, even without any money in advance.

Yes, I did say Kidderminster. The town itself features quite prominently in this film. Nothing wrong with Kidderminster, it’s just not the first location you think of when British horror films come up in conversation.

Stuart’s bedsit includes an armchair where someone was murdered several decades earlier and from where a creepy, masked figure briefly appears to frighten him (and us) before vanishing. Down in the building’s cellar is the lupine, bloodthirsty Beast of the title who exerts some strange psychic influence over Stuart, requiring him to bring the demon a regular supply of young women which the Beast bloodily slaughters. ‘Sir’ was the previous slave of the Beast and has only escaped by finding his master a replacement. However, he doesn’t leave Kidderminster and continues to crop up throughout the film. I think he feels guilty about having sacrificed his wife to the Beast after they first bought the house, but it’s not clear.

Powerless to resist these cruel demands and unable to leave Kidderminster - as we see when he tries but fails to board a train - Stuart make the best of his situation. He sets up a music system downstairs which will drown out the girls’ cries (I think).

Meanwhile, author Lloyd Hickox (Richard Rowbottom) arrives in Kidderminster to research his family tree and takes a (much nicer) room in a different house. We also meet Chloe (Katherine Venables) and Alice (Jemma Guest), two girls whose idea of a good night out is, apparently, a local council-organised(!) seance. Lloyd also attends this, having been invited by a local librarian (Ian Crompton).

Chloe doesn’t turn up at the seance - because she has been abducted by Stuart and murdered by the Beast. Alice is amazed when Lloyd starts talking with her friend’s voice. He subsequently tells her that he has been having recurring dreams about a young woman being murdering, and a rough biro sketch which he draws looks like Chloe...

This is all an intriguing set-up but the problem with Feast for the Beast is that it doesn’t do anything with it or really go anywhere (except to Kidderminster, obviously). Alice is abducted while waiting for Lloyd to pick her up; he finds some research papers which she dropped and reads them while driving at night before crashing his car (an admirably achieved effect considering the tuppeny-ha’penny budget). Apparently the original killer was his great grandfather. Er, so what? That neither explains nor concludes anything.

There’s an extraordinary final sequence where the Beast, now very visibly a baggy fur suit, like a Fozzy Bear costume with the wrong head, leads Stuart (on all fours) around Kidderminster on a dog-leash. I can’t make head nor tail of that and its silly, almost zany tone seems at odds with the rest of the film which is played straight. There is also a partially successful sequence earlier on where Stuart accosts a vicar who thinks his description of the Beast is a metaphor for drug addiction but who realises his mistake when confronted by the demon in the cellar.

In fact the vicar sequence, though it suffers from poor dialogue and the vicar himself is not a credible character (the actor is named only as ‘The Rev’d Tool’), is in a way the closest that the film gets to exploring its central premise. In any story about a serial killer (which is what Stuart is forced to become, effectively) the interesting point is not the abduction, abuse and death of the victims, it’s what is going on inside the perpetrator’s head.

I was hoping that we might be asked to question whether Stuart is really the slave of a semi-lupine demonic entity or whether he is a psycho who justifies his evil acts through delusions of a non-human ‘master’. But, the vicar’s suggestion of drug abuse aside, there’s nothing in this direction.

We’re never in any doubt as the existence of ‘the Beast’, although its nature, its purpose and its reasons for its actions aren’t ever touched upon. Where did it come from? Why does it require young women? Why does it need a human to bring them to the house? How was ‘Sir’ able to escape from this one-sided quasi-Faustian slavery by finding a replacement (and why does Stuart not attempt the same)? Presumably the masked figure is the ghost of Hickox’s great grandfather but was he the first slave of the Beast or was the Beast created through his evil ways? Why does Hickox have dreams about Chloe but none of the other victims?

There are a whole host of unanswered questions here which leave the viewer unsatisfied because the film has no real resolution. This is a piece-meal collection of ideas, many of them displaying an originality rare at this level of film-making, but there is no cohesive narrative binding them together. There’s not even a clearly defined central character: is it Stuart, Lloyd Hickox, Alice? So without an evident hero, there’s no hero’s journey. And the hero’s journey isn’t just a pretentious film studies metaphor, it’s a summation of the ideal narrative structure which successful stories either emulate or react against.

Ultimately, it’s difficult to say what Feast for the Beast is actually about. If it’s about a young man trapped in servitude to a demon, then it doesn’t work because we never find out what it’s like for Stuart to do what he does. If it’s about an author who discovers a dark family secret that is terrorised a town (Kidderminster!) then it doesn’t work either because Hickox only finds that information by accident (from notes which Alice has made during an internet search - not exactly an exciting thing) and he then does nothing with it. Matters aren’t helped by the fact that these two characters, who most closely fit the requirements of protagonist and antagonist, not only never meet but are not even aware of each other’s existence.

On top of all this is the constant, niggling worry throughout the film that if Stuart can’t leave Kidderminster but is forced to abduct girls from the street (as he does several times in the film) for murderous purposes, then Kidderminster should very rapidly become the scene of the biggest police investigation since the Yorkshire Ripper. In fact, if this has been going on for seventy years, with a succession of men serving the Beast’s appetite, then there should be seven decades’ worth of unsolved disappearances in Kidderminster. And surely somebody is going to notice that.

Just to add to the confusion, every ten minutes or so we have a brief, unexplained shot of a youth in a green hoodie waking up. This has no obvious connection with anything.

These story problems are a shame because technically this is Tom’s best film: a step up from Mr Blades which was itself an improvement on the rough-and-ready overambitiousness of Full Moon Massacre. The photography is good, even transcending the limitations of video at times, and the sound - which as we all know is often poor on micro-budget pictures - is excellent, in terms of both recording and mixing. The editing is good and at 73 minutes the film does not overstay its welcome.

I think the problem lies in Tom’s almost-a-one-man-band approach. He gives himself the credit ‘written, shot, edited and directed by’ and adds DP and ‘SFX creator’ to that at the end. I would suggest that from feature number four, Tom should start farming out some of this work to collaborators; stick with directing and either cinematography or editing but let somebody else handle the scripts. Tom’s great at ideas, at concepts, but I don’t honestly think he’s quite got the screenwriting skills to match his film-making talent.

Don’t get me wrong. I honestly believe that Tom has what it takes to make it as a film-maker. He’s still only, what, about twenty and he already has three indie feature films under his belt, none of which is going to win an award but none of which is embarrassing. That’s a fantastic achievement. I know that Tom idolises people like Fred Olen Ray, David DeCoteau and Jim Wynorski so he knows the level of movie-making that he is aiming at and I think he’s going to get there if he sticks at it. With every film his skills and understanding progress and he will still be irritatingly young when he reaches the level where adjectives like ‘commercial’ and ‘professional’ will come into play. 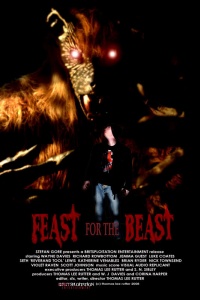 Feast for the Beast is a good stepping stone on that path and it contains enough good stuff to satisfy its intended audiences. But a feature film is not a showreel and needs a more satisfying, possibly simpler, overall structure than can be found here.

Steve Sibley (A Home for the Bullets) shares executive producer credit with Tom while there are three actual producers: WJ Davies (ie. Wayne Davies, who also get an ‘assistant camera’ name-check), Corina Harper (who plays one of Stuart’s victims) and young Mr Rutter himself. Tom and his brother Andrew (Statica) both play the ‘Masked Stranger’ in various scenes although someone named Mike Parker contributes his voice. The music is provided by Visual Audio Replicant.

The feature is followed immediately by a nonsensical, self-indulgent, ten-minute ‘spin-off short’ called Ultimate Power Tool starring - but apparently not directed by - Tom. You don’t need to watch this.