I met Ken Foree at the AFM in 1998 where he was promoting a forthcoming sci-fi project called Pale Dreamer. As far as I know, that film never got made but I was able to get this rather impromptu interview out of it.

How did you get involved with Pale Dreamer?
"How did I get involved with this project? Jeff Varga called me and got in touch with my agent and quite frankly they wanted me from the beginning. They sent me a script of Pale Dreamer and asked me if I was interested in getting involved. And I told them that yes, I’d read it; I said ‘I like this script.’ That was about a year ago. Then I got another call from Brian Thomas and he said, ‘We want you in.’ They contacted my manager and we started to talk about deals. I agreed to do it. We had a reading and I loved the script, I loved the characters and the other actors. We had an immediate rapport - we really got along. That nip and tuck kind of thing that was in this great script where we have a go at each other - and we had it going during the reading of the screenplay."

Tell me about your character.
"My character is a Moslem. He’s kind of the - well, I wouldn’t say Fred Stanford - but he’s a fix-it-all. He’s a great technician, he is a jack of all trades in terms of repairing and keeping a ship going that really shouldn’t be in space. It’s kind of a worn-out, overused hunk of junk that he keeps running with bailing wire and rubber bands."

I would imagine that, being a tall, bald, black guy you get cast as the bad guy quite a bit.
"You know something? I’ve done about half and half. Most people remember me because I do sometimes - and I regret it - but I do intimidate by just standing here. I don’t have these sinister thoughts and I’m basically a teddy bear, but everyone thinks that I’m this imposing figure that’s always playing bad guys. I’ve played about half and half - I’ve played cops, heroes in all the horror films I’ve done - and people remember me for both. At this time I’m doing a series for Nickelodeon that goes out on Saturday nights at 9pm. It’s called the Kenan and Kel show and I play the father of a family."

That plays on Saturday mornings in the UK.
"It sometimes plays Saturday mornings here too - it switches around. And I’m the father. That’s comedy, although I still play a mean father because the kids are always getting me into something. I’m either getting hit with something or I’m slipping on something. Basically that’s what I’m doing. Some good guys, some bad guys, and now I’m the almost Cosby-like guy on a family situation comedy where I take a lot of hits from kids."

You’re best known for George Romero’s Dawn of the Dead. Does it help that you have that profile among the fans?
"Well, you know, I’ve worked with Romero and a lot of people remember me from Dawn of the Dead. There’s certainly a great following for that film. But also I’ve done seven or eight other horror films and a lot of TV work. So I think that’s a combination of all that and in this genre, what with doing Dawn of the Dead and it being a success. We opened Dawn and didn’t think it would play in America; I thought it would play in foreign markets. But we opened and in Variety we were number one the first week, the second week number two and the third week number three. And that’s not bad going against some of the top films in the country at that point. So it did very well and it’s one of the ones that I’m more famous for in this genre, but I’ve done about five or six horror films."

What are some of the other ones you’ve done?
"Oh heck. Well, The Dentist is one not so long ago. Death Spa, Phantom of the Mall."

You know what Death Spa was called in England?
"What?"

Witch Bitch.
"(Laughs) Appropriately enough! Absolutely. Whoever thought of that must have just thought: ‘This is what we have to call it’! Perfect, perfect. Let’s see: what else? Texas Chainsaw Massacre III - I think it was III! And a few others." 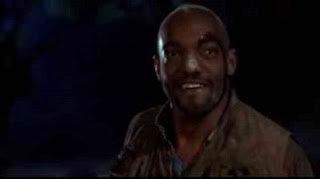 Do you find that when you’ve been in a few horror films, the horror directors associate you with the genre and cast you again?
"Not necessarily. I think I’ve got most of these roles purely through the audition process. I don’t think it was because I’ve done the other horror films. With this one, I think the people who wrote this screenplay had me in mind because of my work in horror. Basically I don’t think the others did. I just put in and won the job and that was it, plain and simple.”