The ghastly phenomenon that was ‘reality TV’ - surely the least entertaining ‘entertainment’ idea ever - did at least spawn a tiny sub-sub-subgenre of movies taking the idea to the sort of level that it deserved, something where the self-obsessed fools who ‘starred’ in these shows, and the mindless executive morons who ran them, got what they deserved. To the likes of Series 7: The Contenders, Halloween: Resurrection and My Little Eye let us welcome Danny Draven’s Hell Asylum. 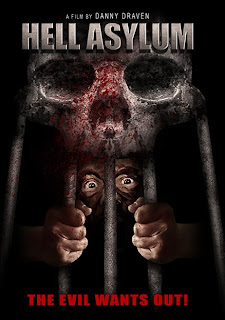 Of course, the whole set-up is rigged - Max doesn’t want to shell out the million bucks - but things go wrong when it transpires that the building actually is haunted. By some very nasty, cowled, cannibalistic ghouls, one of whom, incredibly, is the gorgeous Brinke Stevens (The Naked Monster etc) under a ton of blue make-up. People start to die in particularly gruesome ways, a situation not helped by accidents and mistakes brought on by the confusion between the supernatural reality and the ‘reality’ created for the cameras.

From what is really a very simple premise, the screenplay by Trent Haaga (Terror Firmer, Citizen Toxie) develops nicely, avoiding the pitfalls of repetition and unoriginality into which it could so easily have slipped. It doesn’t actually explain who/what the supernatural ghouls are or why they’re on a killing spree, but hey, you can’t have everything. A top notch cast includes Debra Mayer (Decadent Evil, Voodoo Academy, The Gingerdead Man) and Tanya Dempsey (Deathbed, Witchouse 3)

Director Draven’s video diary is tremendously telling: the film spent nine days in pre-production and nine days shooting. To come up with something this impressive on such a tight schedule (and commensurably tiny budget) is remarkable. Admittedly it is a little short (without the lengthy end credits sequence, the movie is just over an hour) and all the innards on show do seem to resemble spaghetti more than any known human internal organ, but those are quibbles. Hell Asylum is a funny, scary, well-acted, well-made low-budget horror and thoroughly recommended. And it’s got Joe Estevez in a cameo as Max’s boss - star of Return of the Roller Blade Seven, Beach Babes from Beyond, Minds of Terror, Deathbed and about a million other classics - what more could you ask for?

The British DVD, which I have never seen in any shop, has only a trailer and touts itself as a 'Charles Band Classic'!