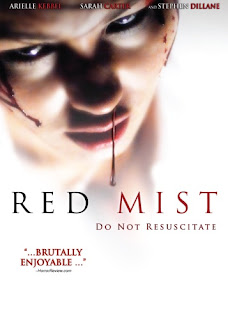 Andrew Lee-Potts is quite the horror star, isn’t he? He was in not one but two British fantasy series of the noughties: Andrew Marshall’s Strange (alongside Richard Coyle, Samantha Janus and Ian Richardson) and infantile ITV dinosaur nonsense Primeval (a show which had great promise in its first season then jumped the shark like nothing I’ve ever seen before).

On the big screen he was in The Bunker and 1408 and Return to House on Haunted Hill. He was in vampire movie True Bloodthirst for SyFy and an episode of the 2013 Dracula TV series and he was in a stage production of Dracula in London in 2012. And he was in Red Mist aka Freakdog, one of two horror films produced by Simon Bosanquet and Mark Huffam’s Generator Entertainment with funding from Northern Ireland Screen. Last week I watched Ghost Machine (‘from the makers of Red Mist’) so now it’s time to take a look at Red Mist, which Anchor Bay have very kindly made available for free through their YouTube channel.

Potts plays Kenneth, a young man with learning difficulties working as a porter in an American hospital. A completely unnecessary prologue combines footage of Kenneth fondling a female corpse in the hospital morgue with a flashback of his childhood when he saw his prostitute mother beaten up by one of her clients. Neither of these scenes will have any bearing on the rest of the film.

Next we are introduced to seven medical students who initially are pretty identikit. One is a goth, one is vaguely Asian, that’s about it, although they do become more clearly defined as the movie progresses. They go to a local bar and somehow stay for a lock-up (possibly one of them isn’t a med student but actually owns the bar - it’s a bit unclear). Kenneth stutteringly wants to join them but by that time they’re not only fairly drunk, they are also high on some pills which they swiped from the hospital pharmacy. Rejected and taunted, Kenneth heads off into the night but not before revealing that he has filmed the pill-swiping incident on his mobile phone. 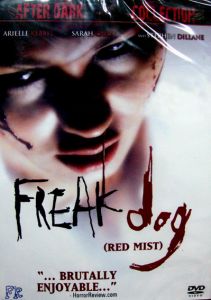 Worried that this will destroy their careers before they have begun, the students persuade their nicest member, Cat (on whom Kenneth has a crush) to invite him back, but only so that they can render him unconscious and wipe his phone memory. Cruelly cajoled into drinking a cocktail of booze and drugs, Kenneth has an epileptic fit and falls off a table. After some heated debate, the gang decide to drive him to hospital but just push him out of the car and zoom off before being seen. Which they do.

See, here’s the basic problem. These folk are supposed to be junior doctors. And to be a junior doctor you need two things. First, compassion and empathy (okay, that’s two things but they’re related). I’m not saying no doctor is a bastard (hem hem, Harold Shipman anyone?) but normally if a doctor turns bad that's when they’re experienced, old, bitter and cynical. No-one trains to be a doctor unless they genuinely want to help people.

The other thing that tends to mark out medical students is that they are generally fairly sensible. And intelligent. That’s not to say that junior doctors don’t know how to partay. Wow, they can have some wild times and they can get blind drunk, although I think you’ll find that knocking back prescription drugs in a public bar, especially stolen prescription drugs, is pretty rare among trainee medicos. Mainly because they know what those drugs are and what effect they can have on a metabolic level.

So I just don’t buy the behaviour of these supposedly empathetic, intelligent junior doctors when they steal dangerous meds, force them onto a mentally disabled colleague and then decide to not call an ambulance in order to save their futures. There is a ring-leader of course, Sean (Scottish actor Martin Compston from Monarch of the Glen, whose other BHR credits include Doomsday, The Disappearance of Alice Creed, When the Lights Went Out, Piggy and Strippers vs Werewolves); the others are on a sort of sliding scale of shittiness between Sean and Cat. But still, essential though it is for the plot, this behaviour doesn’t ring true. 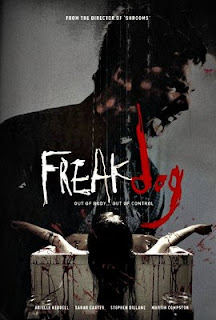 Anyways, the next day it turns out that Kenneth is in a coma from which he is not expected to emerge. Cat feels guilty, reads up some scientific papers and decides that she might be able to revive him with an experimental drug which she is able to easily obtain from the pharmacy by forging a senior doctor’s signature. But this drug doesn’t actually awaken Kenneth, instead it gives him the power to psychically control other people. And he sets about using this power to wreak revenge on the seven people who hurt him. Yes, it's an Irish version of Patrick. Maybe they should have called it Paddy? Maybe not...

We’re nearly halfway through the film by this point, but things are picking up. Not just the violence and gore - the second death in particular is absolutely stomach-churningly brilliant - but also the tension, the fear, the plot and even the characterisation. It’s somewhat ironic that the way-too-long first act, following on from the irrelevant prologue, means we only really start getting to know stuff about these people - like what their names are - once they start dying.

Freakdog (which is the term of abuse directed at Kenneth in the bar, then directed back at the victims) is considerably better than Ghost Machine. Not perfect by any means, but still generally good. The tension builds, we really feel for Cat’s plight as she tries to save both herself and her friends, and there is a rare example of a believable police investigation into the multiple murders. Plus a really impressive twist towards the end that changes everything Cat thinks.

On the downside, the film’s final sequence is just daft, involving a completely unbelievable escape from a police station and the sudden appropriation of a completely unlikely piece of electrical equipment. The film would have been considerably improved if it had ended bleakly after Cat’s twist. But there you go: what’s done is done. 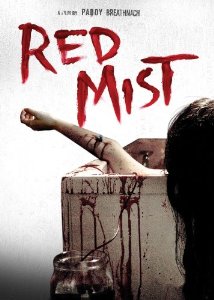 This was the first (and so far only) produced script by Spence Wright, who is currently part of the team trying to generate funding for Vampires vs Leprechauns. He certainly crafted a good solid screenplay for this movie, albeit one that would have been improved by judiciously removing the first few pages and the last couple too. Director Paddy Breathnach is a Dubliner whose previous picture was Shrooms, well received but too Irish to be part of the BHR.

Cat is played by Yank Arielle Kebbel (Reeker, Aquamarine, The Grudge 2, The Uninvited, Vampires Suck and a recurring role on The Vampire Diaries), whose name is rather embarrassingly spelled wrong in the trailer. The five other medical students are played by Canadian Sarah Carter (Mindstorm, Wishmaster 3, Final Destination 2, Skinwalkers); Alex Wyndham (who is British but was in Dave Parker’s The Hills Run Red); Irish Katie McGrath (Morgana in Merlin and Lucy Westenra in the 2013 Dracula series); Londoner Christina Chong (Chemical Wedding, Johnny English Reborn and an episode of Black Mirror) who is clearly Chinese but playing a character with a Japanese name; and Michael Jibson (Devil’s Bridge, Panic Button) who is from Hull.

MyAnna Buring (post-Descent, pre-Kill List) has a small but important role as a nurse, and the senior doctors are played by Stephen Dillane (The Gathering, Game of Thrones) as the only character with a British accent, and twinkly-eyed Canadian actor Michael J Reynolds whose career goes right back to 1971 obscurity The Reincarnate and takes in Police Academy, Blue Monkey, My Pet Monster, Gorillas in the Mist, Extreme Measures and The Descent Part 2. According to the IMDB, among his 116 credits he has played 14 doctors, as well as 13 military officers, seven judges, five politicians (including two different fictional US Presidents) and one preacher.

Colin Stinton, who plays the detective investigating the case, is Canadian born but has a string of British credits including Ghostwatch, A Very Peculiar Practice, Tomorrow Never Dies, Ali G Indahouse, Thunderpants and the 2006 remake of A for Andromeda - plus The Bourne Ultimatum. Nick Hardin, playing a security guard, was in a horror film called Bad Karma - but not the Alex Chandon one! 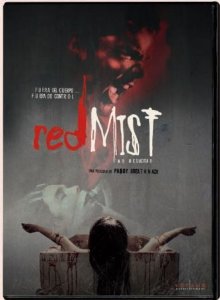 Art Parkinson (Rickon Stark in Game of Thrones) is young Kenneth in the prologue, with Bronagh Taggart as his mother and Emmett Scanlan (Hollyoaks, Colour from the Dark) as the man. Derek Halligan - who was in Rawhead Rex and Enda Hughes’ legendary short film Flying Saucer Rock’n’Roll - plays the world’s most useless hospital pharmacist. Belfast’s Musgrave Park Hospital plays the fictitious Fort Haven Hospital, New England (a careless snafu sees the town name spelled Forthaven on the police cars).

Premiering at the 2008 Frightfest, Freakdog had a very brief UK theatrical release in 2009. Working out which title was used when/where is difficult even at this short remove, with various DVD sleeve designs existing online with both titles. The version posted online by Anchor Bay in 2011 uses Red Mist. Not that it really matters. This is a reasonably slick, reasonably gory, reasonably entertaining slice of British horror whose plus points (good cast, good story once it eventually gets going, solid direction) generally outweigh its minor failings.