I interviewed Samantha Janus on the set of Rampage, a British monster movie produced by PeakViewing Transatlantic, in January 1997. Rampage was shooting in a freezing cold aircraft hanger at the Northern tip of the Isle of Man. The film was screened as Deadly Instinct before finally being released as Breeders. Five years later I interviewed Sam again on the set of the TV series Strange. 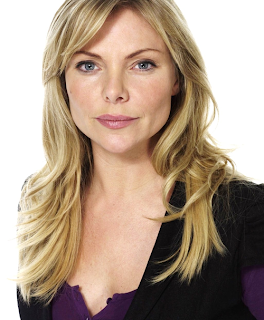 Have you done much action stuff before?
"I've done no action stuff before. This was the first one I've done. What would you say, Glen? Above average?"
(Glen Marks, stunt co-ordinator: "12 out of 10.")
"12 out of 10! Said by our stuntman! There was one which I didn't do which was too dangerous, which was a fall from about 30 feet. My stunt double did it, because there was quite an impact with the water and the water wasn't very deep. So I didn't get to do that, which was just as well, because I jumped into about a foot of water the other day and twisted my knee!"

Are you having fun doing this?
"Yes, the best fun I've had in ages. I'm normally sitting around studios, playing the girl next door and comedy parts and stuff. On this one we're running around with shotguns and turning into aliens. It's brilliant. Never a dull moment."

How did you get this role?
"Paul Matthews, the director, wanted a bit of a name. He was looking around, and he saw me in Pie in the Sky. He connected that I was somebody who was up for the role. I went to meet him, and he offered it to me there and then. I had another project, but we worked it out timewise, so that's really good. But it means I have to work three weeks on this as opposed to four, because I shoot straight off to Cardiff and do another one."

What's that?
"The next one's a film about rugby called Up and Under. I play a rugby trainer. Written by a guy called Jon Godber."

The guy from Hull Truck.
"That's right. So we're going to do a British movie. I've got myself into shape with this one, because I'm supposed to be playing rugby when I get there, against Neil Morrissey, Gary Olsen, Griff Rhys Jones. I get tackled by the lot of them, and I'll kill them when I get there because I am one tough cookie now."

What are the rest of the cast like?
"We've been so lucky with the crew and cast members. They've just been fantastic. My co-star, Todd Jensen, is brilliant. We've got on like a house on fire. Maybe too well, because we're giggling on set a lot. There's been a couple of days when we've been collapsing into giggles and had to be rapped on the knuckles by Paul. But all in all we've got a fantastic cast. Kadamba Simmons I knew from school, who plays the host to the alien, so we get on really well. And also the crew here are brilliant. They've all worked together before, so it's a really nice little set-up. Which makes life so much easier, because there's a lot of stuff to do here and we haven't got that much time to do it in. If we'd had anyone that was making problems for us it would have been a problem. But we've been really, really lucky, and everyone helps each other out."

Are you happy doing the stunts?
"Yes. The only ones I've had a problem with are with it being cold. You can feel how cold it is. Yesterday was really, really cold and I was shivering, but actually it worked for the scene anyway because I was supposed to be scared shitless of this alien. I chucked myself off the balcony which was great fun. I did that really well. We did a huge stunt fall and I was supposed to break through this barrier on the mezzanine level where the bedroom is. Todd and I did that; we had great fun. We landed on these crash mats. We did it twice, and we just saw the rushes the other day and it looks brilliant. Down to Glen, again."

Do you think you're going to be pleased with this when it comes out?
"Yes, what I've seen already - some of the rushes - I'm thrilled with. I think, to be honest, the alien that we've got on this, the special effects and the set: we've been so lucky. Edward Thomas, who's designed most of the sets, has done a fantastic job. You can see by just looking around; the stuff he's done is phenomenal. And our alien just looks so convincing. If you think of the scariest aliens you've seen on TV, like the alien from Alien, it's actually not far off that. We've got all the electronics behind the mask, the eyes moving and the lips. And he looks grotesque. When I did that scene with him yesterday, there wasn't that much acting involved. I was terrified, having those huge growly teeth next to my face, slobbering all over me. It was disgusting."