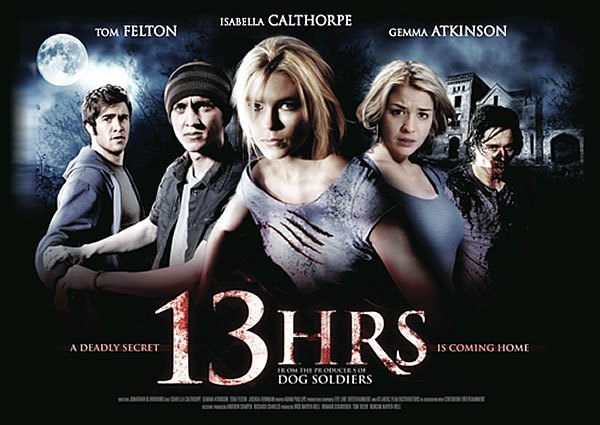 
13hrs (the title is spelled like that on the sleeve and on screen) is a decent little British werewolf movie which kept me watching right to the end and never pissed me off. Which is a major achievement, to be honest. Truth be told, it’s not actually a werewolf movie as the monster in question - which we only get a look at very near the end - isn’t strictly speaking a werewolf. But it’s near enough. Director Jonathan Glendening has stated that he thinks the film works best if you don’t know in advance that it’s a sort-of-werewolf picture, something which is sadly not possible now you’re reading this review.

It’s also not possible for anyone who buys the American disc, which was retitled Night Wolf and given a sleeve image of a werewolf which bears no relation to the creature in the actual film. Good old Lionsgate strike again! These are the same bozos who picked up DJ Evans’ horror feature Daddy’s Girl, starring Jaime Winstone as a psychotic teenager with a medical addiction to blood, then retitled it Cravings and slapped a picture of some vampire fangs on the front. It’s like they want to confuse and disappoint their viewers.

So: 13hrs. On the one hand, the cast are a bunch of twentysomething teens whom we meet drinking booze, smoking dope and swapping leery, unfunny jokes about sex. That could be any one of a hundred films. On the other hand, these are neither awful chavs not pretentious rich wankers, the only two socio-economic groups on show in many British horror films. The family is obviously reasonably well off because Dad (Simon MacCorkindale, who was in the fourth Quatermass and Jaws 3 among his various Manimal/soap roles) owns a fairly large 18th century farmhouse in the countryside but they’re obviously not exactly rich because the place is falling apart. (We do also briefly see the mum, played by Sue Scadding who, extraordinarily, was last sighted in Elisar Cabrera’s 1990s British horror features Demonsoul and Witchcraft X!) 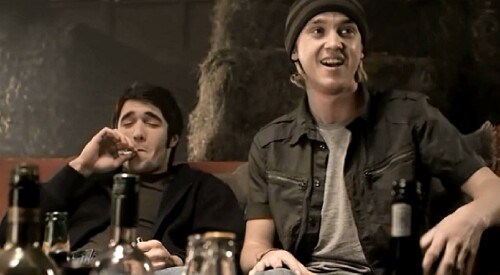 So, they are living down to stereotype with the drink and the drugs and everything, but on the other hand, these ‘kids’ are obviously fairly intelligent. At no point does anyone act like a complete idiot, even for narrative reasons. They don’t spend their whole time swearing like fishwives. They talk and reason and argue and fight but at all times we are rooting for them. Intelligent, middle-class, young characters. It can be done, apparently.

But, on the third hand (call me Zaphod), there’s not much actual characterisation on show. They are all much of a muchness for much of the film and ironically it’s only once they’re dying that we can start to distinguish their actual characters. More problematically, there are several different relationships within the group and even at the film’s end it’s very difficult to fathom these.

Our central character is Sarah (Isabella Calthorpe: Blooded, The Prisoner remake, who is officially posh totty by virtue of knowing Prince William and having a triple-barrelled name), returned from a job in America for a couple of weeks. Three of the boys are related to her, either one brother and two half/step brothers or one step/half brother and two brothers, or something. And is one of the others her ex-boyfriend, or just an old friend? The only other girl is busty Emily (Hollyoaks’ Gemma Atkinson, also in Airborne, Devil’s Pass and the unreleased, unwanted 2012 remake ad infinitum of Night of the Living Dead) who is dating one of the boys, but is that Sarah’s brother or ex or...? I’m lost. I was lost watching the film.

To some extent, it doesn’t really matter just as long as Sarah doesn’t end up in a clinch with anyone she’s related to by blood, but the script’s biggest failing is definitely that it introduces us to six characters all at the start who have a complex web of relationships by birth, marriage, friendship and sex, without properly explaining who is who and what is what - including four males of the same age who look, dress, talk and behave basically the same. I’d put this down to inexperience but 13hrs was Glendening’s third feature. One of the boys has a hat, but that doesn’t help much. 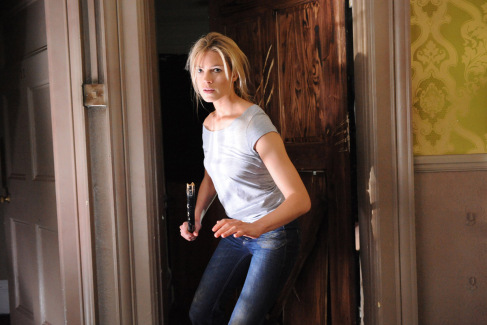 The four boys are Stephen (Peter Gadiot: Once Upon a Time in Wonderland), Charlie (crikey! - Gabriel Thomson: The New Adventures of Pinocchio, My Family), Doug (Joshua Bowman: Prowl, Revenge) and Gary (Draco Malfoy himself, Tom Felton, also in Peter Hewitt’s Borrowers movie, The Disappeared and Rise of the Planet of the Apes). There is also Luke (Antony De Liseo) who, at 13, is younger than the others. Sarah finds them all smoking and drinking in a hay barn, with young Luke passed out up in the hay loft after having tried his first spliff. Leaving Luke asleep, the others head into the house for supplies, including candles because all the power has gone. There they find Sarah’s father ripped to shreds and something big and toothy looking for dessert. Fairly rapidly, the group retreat into a bathroom and then up into a loft where much of the action takes place.

‘From the producers of Dog Soldiers’ ballyhoos the poster and this is technically accurate as two of the four producers are Tom Reeve and Romain Schroeder, both of whom pulled similar duty on Neil Marshall’s debut. And there are certainly narrative parallels, not just in that this is part of the small catalogue of British werewolf movies. Once our characters are in the loft 13hrs becomes something of a siege film, as Dog Soldiers was. More pertinently, this sort-of-werewolf is an external threat, a dangerous other, not the introspective internal fear of other-self that has been the traditional format for lycanthrope tales since even before Lon Chaney donned the yak hair.

None of the group have a working mobile phone so their goal is to somehow get to either a landline in the bedroom where the remains of Simon MacCorkindale are scattered around, or else locate a shotgun which is elsewhere in the house. In these endeavours they are aided by the house’s great age and a hand-and-knees passageway connecting this loft to another. But not everything works out, and not everyone survives. Plus of course there is the very real possibility that Luke will wake up and come into the house, unaware of the danger awaiting him. 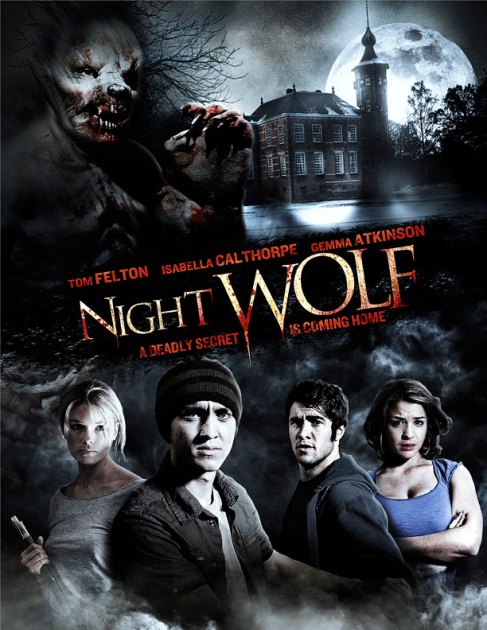 Intercut with the second half of the film are a local copper, PC May (Cornelius Clarke) and a disreputable type named McRae (John Lynch: The Secret of Roan Inish, Sliding Doors, Alien Hunter, Black Death, Balinor in Merlin and George Best in Best) who may be either gamekeeper or poacher, but who certainly knows how to snare animals and has the equipment for it. They become aware of a situation out at the farmhouse and head that way in May’s squad car. On the road, they find an abandoned car which may be meant to suggest that something terrible has happened to someone else but, if this is the prelude to a twist, it’s an obvious twist and the car actually just reinforces what we already suspect. Although there is a second twist right near the end which, while not being a complete shock, is less obvious for most of the film.

13hrs takes the teens-in-peril monster flick on a different spin and keeps the action and horror going, never really letting up from that first attack and retreat into the bathroom until right at the end which is the aftermath the next morning and so, presumably, 13 hours later. The script, which had been knocking around for a few years, was written by Adam Phillips whom Glendening knew from film school. Phillips' only other listed credit is a short he wrote and directed back in the early 1990s, presumably as his graduation film. Glendening himself mostly works as editor for corporates and BBC stuff but he has a few other features. His feature debut was a drama called Summer Rain, followed by little-seen BHR feature SNUB (it stands for Secret Nuclear Underground Bunker) which had a UK DVD release in 2010.

He also directed one segment of the Elisar Cabrera-produced anthology Virtual Terror, which means I’ve mentioned all three of Elisar’s films in one review! After 13hrs, Glendening directed Strippers vs Werewolves for Jonathan Sothcott’s Black & Blue Films, from a script by Pat Higgins. And we will gloss over that for now because I don’t think it was a particularly happy experience for anyone, except to note that it makes Jonathan Glendening probably the only British film-maker to have directed two werewolf movies. 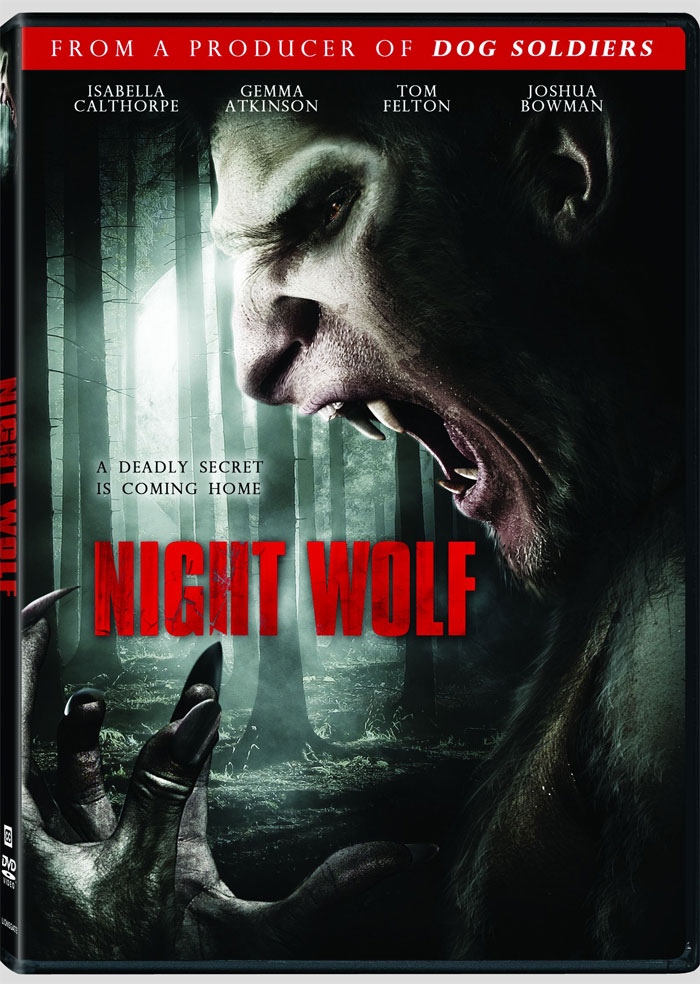 Cinematographer on 13hrs (and SNUB) was Jordan Cushing who has done a few other non-horror features plus loads of ads, music videos, corporates etc, and was second unit clapper loader on X-Men, which I happen to think is pretty cool. Adrian Murray (Basement, Whitechapel) was the editor while Will Randall, who was art director on SNUB, moved up to production designer here. Edward Bradshaw (Stag Hunt) composed the score and Lisa Mitton (Truth or Dare, Best Possible Taste: The Kenny Everett Story) designed the costumes. The prosthetics were handled by Chantell Roy whose other credits include NightDragon, Dark Rage and James Moran’s web-serial thriller Girl Number 9. John Schoonraad (Community, Little Deaths, Rawhead Rex) is credited as creature effects supervisor while Alexander Gunn (Truth or Dare, Deviation, Hogfather, Lighthouse, Dream Demon) was special effects supervisor.

Shot in February/March 2009, 13hrs debuted at the following year’s Frightfest ahead of a brief UK theatrical outing and then the DVD - with the retitled, misleadingly designed American disc following in 2012.