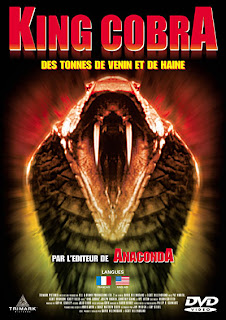 It takes a lot to make a Big Animal Movie that disappoints this reviewer. As a general rule of thumb, you can pick any animal you like, make it abnormally large, have it threaten a cast of unknowns and has-beens - and I’m as happy as Larry. But King Cobra is, unfortunately, a stinker.

An explosion in a research lab, caused by an over-zealous, drug-taking assistant, frees some snakes. These turn up much later outside a small town which is just about to hold its annual beer festival, on which its tenuous tourist trade depends. Once the existence of a giant snake is discovered, and before you can say “Jaws rip-off”, the mayor is demanding that the festival goes ahead, despite the number of people who will be camping in the woods and thus in great danger. And in another less-than-subtle steal from the 1975 classic, a group of completely useless, unsuitable hunters set off to hunt the thing with whatever weapons they can find. 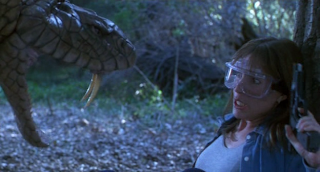 The local sheriff (Fallo) and doctor (Hillenbrand, S) - who were an item but he’s about to leave town - team up with snake expert Nick Hashimoto (the always reliable Pat Morita) and track the thing down. But nothing makes any sense and set-pieces exist in their own right, without fitting into a coherent story, as when a couple of deputies are attacked in their car, and sit there radioing for help instead of - hey! - driving off...

The snake itself is sensibly kept off-screen for a long time, though when it appears it’s a not too bad creation by the Chiodo Brothers (Killer Klowns from Outer Space). However, the budget clearly wouldn’t stretch to a snake that could actually attack people, so every single tussle happens just off-screen. There are also far, far too many POV shots which are supposed to be the snake but - goodness me - are actually just somebody else. 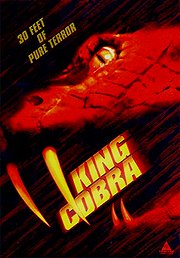 For some reason this cobra has a rattle, something not normally found in that species, and it’s well into the movie before this anomaly is explained as due to this snake being a cobra/rattler hybrid! (Or, more obviously, because a cobra by itself doesn’t make a scary, threatening noise.)

Rather than using the limitations of their obvious tiny budget, the Hillenbrand brothers exhibit them embarrassingly. A ‘crowd’ at an outdoor pop concert is clearly about two dozen people. There is also, for ‘name value’, an otherwise pointless cameo appearance by Erik Estrada as a massively camp marketing executive.

King Cobra has all the faults of a typical low-budget Big Animal Movie - but none of the charm, wit or fun that the subgenre usually exhibits.