Stephen Furst from Babylon 5 and National Lampoon’s Animal House toplines this kiddie stravisnut as a divorced dad taking his son, daughter and son’s friend on a camping trip. Playing the character as what might reasonably be called ‘Woody Allen lite’, he is lumbered with dialogue exchanges like: “There is a dangerous wild animal loose in this area.” “My ex-wife is here?”

The story is hardly complex and, so far as I can tell, has no direct connection with the first Little Bigfoot film apart from the same costume and the same midget actor/stuntman inside it (Joseph S Griffo: Phantasm III, Magic Kid I and II, Freaked, T-Force, Monkeybone etc). Dad and kids go camping where the kids encounter an abandoned baby sasquatch (a prologue shows the little’un being separated from its parents by hunters), which they successfully hide from their father, even when they pack up camp and move into a motel. In a sequence obviously inspired by ET, Little Bigfoot (as they call their new friend) is dressed up and taken into town without anyone noticing.

The bad guy in all this is Cavendish (Steve Eastin: Night Warning, The Hidden I and II, Robot Wars, the When a Stranger Calls remake) who not only wants to catch himself a bigfoot but also owns land which rightfully belongs to a local Indian tribe but which cannot be claimed as long as there is no evidence of prior Native American settlement (so any Indian pottery found is smashed). He’s a thorough wrong’un with a squad of hunters/trackers whom he constantly berates and a tall Native American tracker who can sniff out a sasquatch at fifty paces. 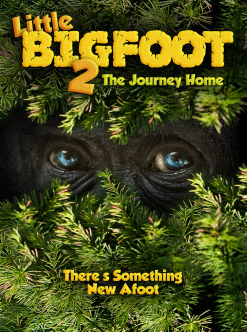 Despite being subtitled The Journey Home, this is no road movie with only the final act fitting that concept, when the kids let their dad in on the secret and they work together to return Little Bigfoot from whence he came - although this involves little more than driving him from the motel back to the campsite. Cavendish’s tracker refuses to shoot the little creature in a stand-off for which the adjective ‘climactic’ seems a little overgenerous. Instead, the Indian uses some mumbo-jumbo magic to revive the injured creature which is subsequently seen, without any real explanation, rejoining its pack/tribe/herd/flock - what is the collective noun for these things? Oh, and the bigfoot’s cave contains some pre-Columbian cave paintings which establish the true ownership of the land.

There is an enormous amount of tree-hugging nonsense in this film about how the Chinook ways were the best and they were at one with nature yada yada yada - the sort of stuff that will only mislead and confuse kids old enough to understand it, rather than pointing them towards a real understanding of ecology and social history.

The three child actors are okay - not great but I’ve seen far worse and two of them were already established TV stars when they made this film. Thirteen-year-old Taran Noah Smith was one of the kids on Home Improvement and played Tiny Tim in a 1995 modern day version of A Christmas Carol entitled Miracle at Christmas: Ebbie’s Story. The best friend is played by Michael Fishman who was DJ in Roseanne. However Melody Clarke, who plays the deliberately infuriating, vegetarian kid sister, seems to have rapidly disappeared from acting after an episode of Baywatch and a sitcom called Unhappily Ever After.

Happy Days’ Tom Bosley (the voice of Gepetto in Pinocchio and the Emperor of the Night) plays the kindly local ranger but doesn’t have much to do except warn Cavendish not to overstep the mark. Stephen Furst’s other genre credits include The Unseen and both Magic Kid movies. He was also, of course, the voice of Fanboy in Freakazoid! and Booster in Buzz Lightyear of Star Command.

Director and associate producer Art Camacho is, oddly, a fight choreographer with credits that range from The Master Demon in 1991, through Cyber-Tracker, Hologram Man and the Magic Kid movies, to Stephen Seagal’s 2002 opus Half Past Dead. Quite why he would have launched his own directorial career with a pair of kiddie monster movies - presumably shot back-to-back, as they were released within a few months of each other - is a mystery. Most of his other films are more likely fair including Soft Target, 13 Dead Men and Sci-Fighter.

Screenwriter Richard Preston Jr has left his name attached to some pretty dreadful straight-to-video movies including Dark Breed and Cyber-Tracker 2, as well as that swiftly forgotten fantasy series Mystic Knights of Tir Na Nog. This appears to be a sole cinematography credit for Jeffrey A Cook whom the Inaccurate Movie Database says is otherwise usually employed as a sparks or gaffer on films like Charlie’s Angels and The Ring 2. 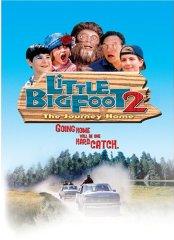 Special effects are credited to John Criswell (Project Vampire, Creepozoids) and Larry Finch. The bigfoot suit itself is little more than a black furry costume with a fairly immobile ape-like mask; curiously, it has black skin whereas the one on the sleeve is pink-skinned. Make-up artist Rela Martine has gone on to work on big TV shows such as The West Wing and CSI: New York, while second unit director Jerry P Jacobs also directed episodes of LA Heat and Mighty Morphin Power Rangers.

TF Simpson enjoyed Little Bigfoot 2 (which he calls Big Littlefoot) so if the intended audience was pre-schoolers then I suppose the film works. But despite Furst’s exasperated divorcee schtick, there’s nothing here for grown-ups.