Nu Image are very much the Ronson’s Woodseal of film production companies: their movies do exactly what it says on the tin. Hence there are spiders (well, a spider) in Spiders, a crocodile in Crocodile and - quelle surprise - a bloody great octopus in Octopus (and for those of you still confused, there is of course Spiders 2, Crocodile 2 and Octopus 2).

After a prologue in which a Russian nuclear submarine is sunk by a US sub off the coast of Cuba, Octopus leaps forward a few decades. Terrorists (well, a terrorist) attack the US embassy in Sofia for no more reason than Nu Image have a studio in Bulgaria so it’s not far to carry the cameras (and it’s easier than trying to find bits of Sofia that might pass for other cities). This is the evil Casper (Ravil Issyanov: The Omega Code, Doomsdayer, Arachnid) who is captured by handsome young CIA agent Roy Turner (Jay Harrington from the US remake of Coupling). 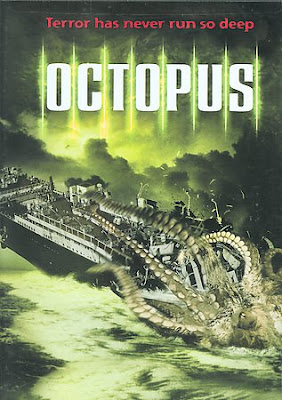 Turner has to accompany Casper back to the States to face charges, and they are transported - for no obvious reason - on a submarine, commanded by Captain Shaw (daytime soap heart-throb David Beecroft, who had a small role in Creepshow 2). It’s really not clear why Casper isn’t simply being flown to the States, nor why a sub travelling from Sofia to the USA has to go via the waters around - guess where - Cuba. Also a passenger on the sub is sexy scientist Lisa Fincher (Carolyn Lowery: Candyman, Tales of the City). The only other discernable character is a crewman named Brickman, played by Ricco Ross (Aliens, Wishmaster) who also worked with director Eyres on Project Shadowchaser I and III.

Off Cuba, Casper somehow escapes (he shouldn’t be too hard to find - it’s a submarine for Heaven’s sake!) but worse than that, the ship is attacked by a giant octopus, presumably mutated by the spilled nuclear fuel from that old Russian sub, and sinks to the ocean floor. It must be said that the CGI octopus is not only pretty well-animated but also sensibly underused by Eyres, who has plenty of experience of this level of movie-making. That said, there is one deeply stupid sequence when a tentacle somehow gets inside the sub without depressurising the hull!

Eventually our heroes (and villain) escape in a mini-sub and are picked up by a passing luxury ocean liner which is promptly hijacked by Casper’s associates, who have come looking for him. But the octopus which they thought had been destroyed by the sub’s self-destruct mechanism is still around and rises to the surface.

Let’s be honest, Octopus - like most Nu Image films - is pure B-movie nonsense from start to finish. Characters are paper-thin, effects are adequate, the script (by Michael D Weiss, who subsequently worked on the Jackie Chan/Steve Coogan Around the World in 80 Days) makes no sense whatsoever. But Nu Image films are also unpretentious and fun, suitable for a late-night screening with one’s brain in neutral. There are plenty of better films than Octopus, but there are also many, many films which, despite huge budgets, name directors and stellar casts, are far, far worse.

It’s called Octopus - it’s a movie about a giant octopus. You were expecting perhaps something else?