Where did the inspiration for Stalking Hand come from?
“Well, I was watching television and the image of a very attractive person flashed on the screen. Within seconds a certain part of my male anatomy began to involuntarily react, as though it had a mind of its own. This got me thinking about body parts having a consciousness completely separate from their host organism. Since the idea of making a movie about an angry, disembodied penis seemed a bit much (even for me) I decided to make a film about an angry, disembodied hand.

“Okay, that's not really true. Actually a severed hand seemed like an inexpensive and fun subject for a horror movie. A monster that didn't require a lot of make-up, but could still wreak a lot of humorous, heinous havoc on people.”

Why did you decide to move away from the sexy movies you had previously made, and what was the biggest difference in making this sort of film?
"I wanted to prove to myself I could make a movie that didn't depend primarily on naked girls! Not that there's anything wrong with naked girls, but I was beginning to feel the T&A was becoming a creative crutch. The biggest difference between making this movie and one of our erotics was the shear amount of scripting required. Instead of being able to depend on nudity and simulated sex scenes to bulk up the action, I had to write the whole movie! This movie had like 80 pages of dialogue instead of the usual 40 or so.”

Despite calling yourself a ‘one-man film industry’, you still need a cast and crew: where did you find them?
“Local bars, the homeless shelter, mental hospitals, the dog pound, jail. Actually we have a stock company of people who have been working with us since our first film Killer Sex Queens from Cyberspace. We also did a conventional casting call for Stalking Hand. We had a phenomenal response and were able to use a lot of great, motivated people. Some genuine show business professionals, some talented amateurs. We were able to greatly expand the scope of our talent pool and we plan on working with many of these same people on subsequent projects. 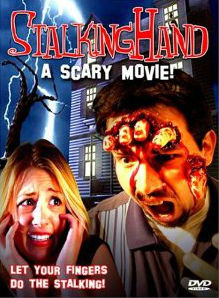 “The ‘one-man film industry’ title was bestowed on us by Joe Bob Briggs (the journalist, actor, comedian and most prominent B-movie critic in the universe). Truth is I actually wear a lot of hats when it comes to getting the work done, but no one is really a one man band. Getting a movie finished and to market requires the efforts of a lot of people.”

What constraints of time, money, equipment, effects etc did you have when making Stalking Hand, and how did you overcome them?
“We don't even try to overcome our limits. We work with them. I honestly believe it's our ability to effectively exploit what relatively little we have that makes our shows entertaining.

“You never have enough time or money. We do have excellent professional grade equipment, although in limited quantity. We have always shot our movies in professional quality formats (Betacam SP and digital) and have non-linear post production gear that can and does produce a broadcast quality end product.

“On Stalking Hand we had a great guy handling the physical effects. We did the CGI ourselves. Making movies like ours is all about using whatever you have to its most entertaining effect. In spite of the obvious limits under which we function, I believe we have never failed to entertain in any of our movies.”

Why did you include all the cartoon sound effects?
“It's a serious character defect. Perhaps the influence of watching way too many cartoons. Animations are rife with sound effects designed to counterpoint the action. Also, using sound effects is like munching potato chips, once you start you just can't stop!” 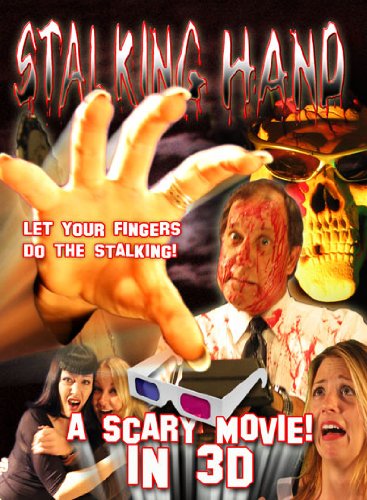 Which aspects of the film worked out how you wanted, and which ones didn’t?
“That's a kind of personal question, isn't it? Listen, in every show there is stuff that works and stuff that doesn't. Stuff sometimes works on paper, but not when you roll the camera. You solve those problems on the spot. I use nearly all of what I shoot. I have very strong post production skills and I can usually finesse even borderline takes into a usable condition.

“Stalking Hand had no re-shooting, but we did end up going back and shooting one additional scene that helped set up the story. I will admit to having a little trouble with pacing in the first edit. I managed to pick up the tempo of the film by cutting scenes that were designed to run consecutively and cutting them together concurrently. This gave the impression a number of events in the film were happening at the same time and really helped keep things moving.”

What has the response to the movie been like from people who have seen it?
“Stalking Hand: A Scary Movie is a horror/comedy. When you're dealing with humour the audience is never ambivalent. They get the jokes or they don't. So far the response has been 100% positive. Most people seem to think the humour and the horror work well together, and not at the expense of one or the other. The only criticism has been constructive and instructional. I would suggest all your readers buy a copy of the film when it becomes available (very soon!) and make up their own minds.”