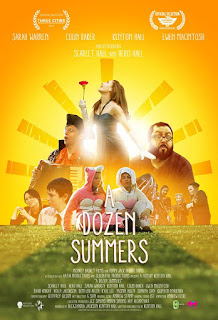 I so rarely get to watch kids’ movies nowadays. Well, except for the latest Pixar or Blue Sky summer tentpole with TF Simpson. Most of what I watch is microbudget indies, and not many people make microbudget indie children’s films. So hooray for A Dozen Summers, a charming and fun kids' picture that adults will also enjoy, shot around my home town of Leicester and currently on the festival circuit.

Written and directed by Kenton Hall from KillerSaurus, the film stars his own 12-year-old twin daughters Hero and Scarlet Hall as Maisie and Daisy McCormack. Kenton himself (without the facial hair and with a more obviously Irish accent) plays the twins’ father Henry, an eccentric author separated from their advertising model mother Jacqueline (Canadian script supervisor turned actress Sarah Warren).

A Dozen Summers is a divertissement, a lightweight musing on the highs and lows of the tween years: too old to be a little kid, not yet a teenager. Crushes, bullies, teachers, parents, bicycles, shops: these are the elements of a 12-year-old’s life and many conventional film-makers would have aimed for some sort of artistic or meaningful statement, which would have been praised by the critics and ignored by everyone else. Kenton Hall's take on matters is more prosaic than pretentious and therein lies is strength (and watchability). A gently wry humour permeates the entire film; you can't take life seriously when you're twelve and making a movie about yourself. 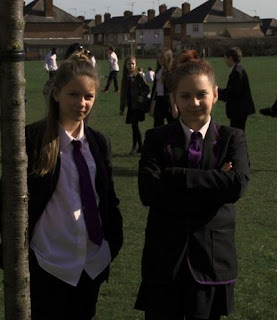 The distinctive schtick of A Dozen Summers is its playful self-referentiality. Maisie and Daisy, finding themselves in a film, take the opportunity to make a film about their lives, using jump-cuts, flashbacks, fantasy sequences and other cinematic conventions. The camera becomes a character, though there is no camera-man or any other actual physical crew. Interestingly, where many self-referential films would have characters address the audience directly, via the camera, here it is the camera itself which they address, an intangible (but noticeable to other people) eye into their world.

It would be churlish to criticise a film this sweet and open, like kicking a puppy. Naturally among a cast of children with varying levels of experience, the actual quality of the acting also varies. Some are excellent, others are giving it their best, bless ‘em, and in a sense the occasional wooden performance gives the film a grounding in realism that helps to distinguish it from Hollywood pablum or pretentious indie cack. 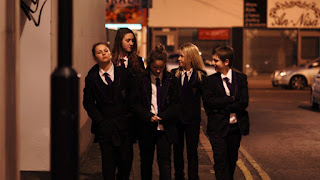 A Dozen Summers is a bit like the city of Leicester itself: not big-headed, not overblown, but a good, solid, down-the-line, get-what-you-pay-for British city with a population proud of their home, not because they believe it’s better than everywhere else, but because they know it’s a generally great place for them and their families, with the good outweighing the bad, and that’s all you can ask for in this day and age. Canuck ex-pat Kenton Hall may not be a native of Leicester, but he has made a very Leicester film.

The young cast includes local star Holly Jacobson (Suckablood, Bloodline) as a diminutive, psychotic school bully (her dad Ben has a couple of technical credits), Quinton Nyrienda (Assan in Young Dracula) as a love interest and David Knight (Ned in Hetty Feather) as the token boy in the twins' gang. 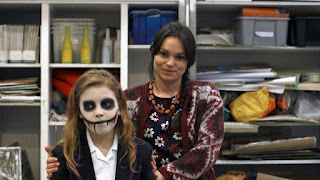 A Dozen Summers is something different, something light and fun but imaginative and surprisingly resonant. Just like your twelfth summer, it is ephemeral and will be gone before you know it - so see it if you have the chance.