The Girl with Two Masks 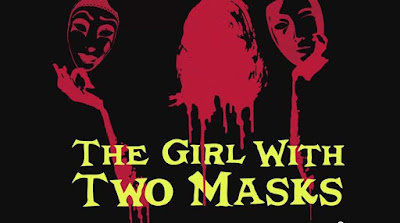 The Girl with Two Masks is an interesting film. It will not be to everyone’s taste, and it’s not without its problems, but I can’t say that I didn’t enjoy it for what it was.

The premise couldn’t be more British if it tried: a national pub chain is trying to take over independent boozers. Young Mike Parker (Nick Hayles, who also starred in director Sam Casserly’s 2012 steampunk short To Kill a Princess) is on the Acquisitions Team, led by sweaty, balding, misogynist dinosaur Harry Ashley (a blistering performance from Stephen Sheridan, who was in Casserly’s short Red Wedding and a Will Young video!). Given one last chance, Mike is despatched to The Girl with Two Masks, instructed to persuade the owner to join the chain or else.

That owner is straight-talking, tee-total, vegan tough cookie Dexi (Rachel Laboucarie: Frank Slasher, Ponder’s End), a fascinatingly complex and contradictory character – and not just because she runs a pub but doesn’t drink. Though Dexi comes across as a solid, practical woman, Laboucarie’s deceptively subtle performance gives us clues that all is not well or right here.

Well, Dexi ain’t selling, so there’s no point Mike going back because he’ll just be sacked – so she lets him stay overnight in the pub (in fact, on the floor of her bedroom) in exchange for some work around the place. The middle act is very talkie, to be honest, but these are two well-constructed characters who have enough in common and enough differences to make these talkie scenes perfectly watchable.

Gradually we find out a little more about the pub’s unique name, which commemorates an incident centuries ago in the village when a travelling circus performer was accused of witchcraft and tortured. Somehow the girl’s influence lingers in the drinking establishment which bears her name and it becomes clear (well, clear-ish) that Dexi has some kind of unwelcome connection with the girl’s spirit. Nothing supernatural or disturbing happens until quite late in the day, but the build-up is steady throughout the film which kept my attention the way that so many other films haven’t.

I would be lying if I said that the story is clear or that what we see makes complete sense, but much like many classic Italian horrors (Casserly cites Argento as an influence), it’s more about the overall impression, and in that respect the final act can be seen to work. There is blood, don’t you worry. And uncertainty about what is really happening (or not). And more blood.

But don’t come here looking for blood. This is a talkie, thinky, character-led film, the half-dozen-strong cast being bolstered by Roxi Gregory (The Séance, Dead Love, To Kill a Princess) and Lauren Mills in small roles plus Sian Denereaz as Mike’s Aunt Mary, with whom he lives and who runs an escort agency from her home. The only other credits are assistant director Jenny Pearman and three credited composers: Marilyn Bordier, Keven MacLeod and Laurie Anderson. (Presumably not the Laurie Anderson…) The film was shot – for £300 over five separate days – in late 2014 with a cast and crew screening in April 2015.

The acting is good, the direction is adroit, the camera and sound are both fine. Where the film stumbles – and it’s a frustratingly big stumble – is in the location. Because it’s abundantly obvious that, wherever this was filmed, it wasn’t in a pub. The building used for both interiors and establishing exterior shots of The Girl with Two Masks is some sort of clapperboard-built parish hall or sports club pavilion. It has fold-away tables and stackable chairs. There is sort of a bar, but it’s more of a serving hatch. When Dexi pulls a pint for Mike, a combination of under-the-counter miming by Laboucarie and a spot of foley (most of the credits are acknowledgements of creative commons sound effects) cannot disguise the fact that there’s no pump.

This is a shame because, in my personal experience, a pub is about the easiest location to source apart from your own front room. As long as you shoot in the morning and are out by opening time, most pubs are more than happy to let you film there, in return for a credit. And nothing looks like the inside of a pub quite like a pub. Scenes on a railway station were shot at Bramley near Guildford and there’s at least two pubs in that village, The Jolly Farmer and The Wheatsheaf, plus plenty more in the surrounding area. 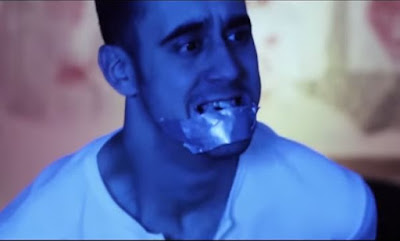 The above notwithstanding, Sam Casserly could at least have made the location look a bit more like a pub by rounding up a few extras. We never see or hear a single customer, which only serves to reinforce how unlike a pub this ‘pub’ is. There is also a poor decision towards the end when things start to get spooky and some ghostly messages are painted on the door and walls of a bathroom. It’s very obvious that these messages are actually on sheets of paper which have been stuck up on the walls and door. I know the budget was tiny, but a bit of that £300 could have been spent on a couple of pots of paint to cover up the writing afterwards. And you know, places are even more likely to let you film there if you offer to repaint their bathroom for free as part of the arrangement.

All of this distracts from the story though it doesn’t detract from the story, which is original enough and interesting enough to carry the film for its 73 minutes running time, bolstered by fine, sometimes very intense, performances from the small cast. 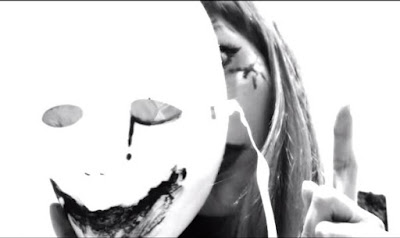 The Girl with Two Masks is Casserly’s debut feature following a number of shorts, including one with the same title shot back in 2010. In the feature, the circus performer who inspired the pub’s name survived her torture but was so psychologically damaged that ever after she would laugh when upset and cry when happy, hence her use of two masks to convey her true emotions. The six-minute film is set in a mental hospital where a patient has a similar psychosis brought on by having, as a child, witnessed her father murdering her mother. There’s no other real connection between the two films. The short (which stars Lewis Saunderson from POV and TORN: A ShockYouMentary) is bloodier, tauter and – because it has a strong simple concept – less obtuse. It also has considerably more names in the credits!

Despite some curious production choices noted above, The Girl with Two Masks is a valiant attempt to do something different, which succeeds enough to make it worth a watch. It bodes well for future films from Sam Casserly.