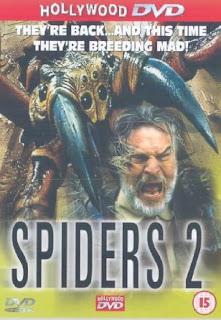 This has no discernible connection with Spiders. On the other hand, unlike the first film, the story is roughly the one on the publicity fliers.

Our protagonists are Alex and Jason Paulsen (Stephanie Niznik: Star Trek: Insurrection; and Greg Cromer), a young couple whose yacht is wrecked mid-Pacific in a storm but who are rescued by a passing cargo boat, among whose crew are the slimy Captain Bigelow (Daniel Quinn: Scanner Cop I and II) and the sinister Dr Grbac (cult favourite Richard Moll, from House, Metalstorm: The Destruction of Jared-Syn and other memorable pictures).

Jason discovers that the radio isn’t broken, as the Captain claims, that the containers on deck are empty, that the ship is sailing in circles - and that there are dead people on meathooks in the freezer. Alex puts this down to hallucinations brought on by the constant antibiotic injections administered by Dr Grbac. 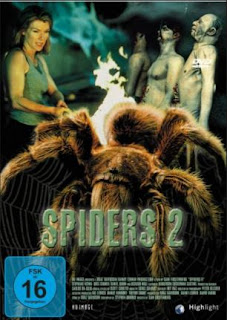 In fact, Grbac is conducting experiments in increased human immunity by combining human and spider DNA. He does this using unwilling victims kidnapped from passing boats by Bigelow and his crew; the victims are forcefully injected by the ovipositor of a giant (three metres or so) spider, and are then kept in sleep capsules until a baby (18 inches or so) spider bursts from their abdomen. This scientific side doesn’t actually make a lot of sense and is really just an excuse for some gruesome scenes and some cool giant spider shots. There’s no explanation of where the giant spiders originated - possibly they are descended in some way from the beastie in the first film, although that seems unlikely.

Spiders II (released in the USA as Spiders II: Breeding Ground) is an ambitious film which uses its limited budget well, especially with regards to depicting the mid-Pacific, given that the whole thing was shot in landlocked Bulgaria! The CGI spider effects by Scott Coulter, Chris Manabe and others are very good - more so than the puppet spiders - and the monsters are sensibly restricted to glimpses and partially hidden shots until the all-out arachnofest finale. Apart from a few crewmen, there are really only four characters, all of whom are well-acted, though Moll’s doctor is rather stereotypical (he even has an Igor-like assistant!). South African director Sam Firstenberg (Cyborg Cop I and II, whose second unit work on Crocodile got him this gig) keeps the pace going and builds tension, even though - apart from a pre-credits teaser - we don’t actually see any spiders until more than halfway through. 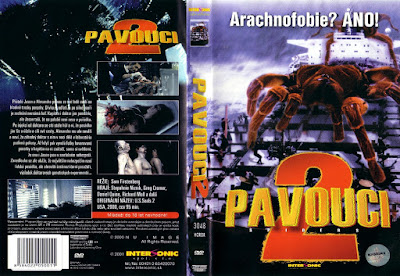 The mostly Bulgarian cast also includes Peter Antonov (a terrorist in Octopus), Dimiter Kuzov (a tugboat captain in Octopus 2) and Gerald Henderson, whose scenes in King Cobra were deleted - which many would consider a lucky escape. Special effects supervisor Willie Botha also worked on both Octopus films and cinematographer Peter Belcher lit the second one.

A fun romp this one, with some thrills, some shocks and plenty of eight-legged horrors.